We have had the Van back for a few days now ready for a long weekend run to Cheddar and Glastonbury.
The HUD isn't an expensive one as I really only needed something to show my speed when we are abroad. Having to constantly convert miles into kilometres can be a PITA.
This little unit is stuck to the dashboard on the right of the instrument binacle. There's a long cable to hide. Currently on top of the dashboard. I might see if I can hide it elsewhere!!
So far so good. It found the satellites and on a short drive looked accurate comparing it to the Boxer speedometer.
The instructions are printed in a font sized about 2px so I need my glasses and a magnifying glass to see how to get in to display Kms. 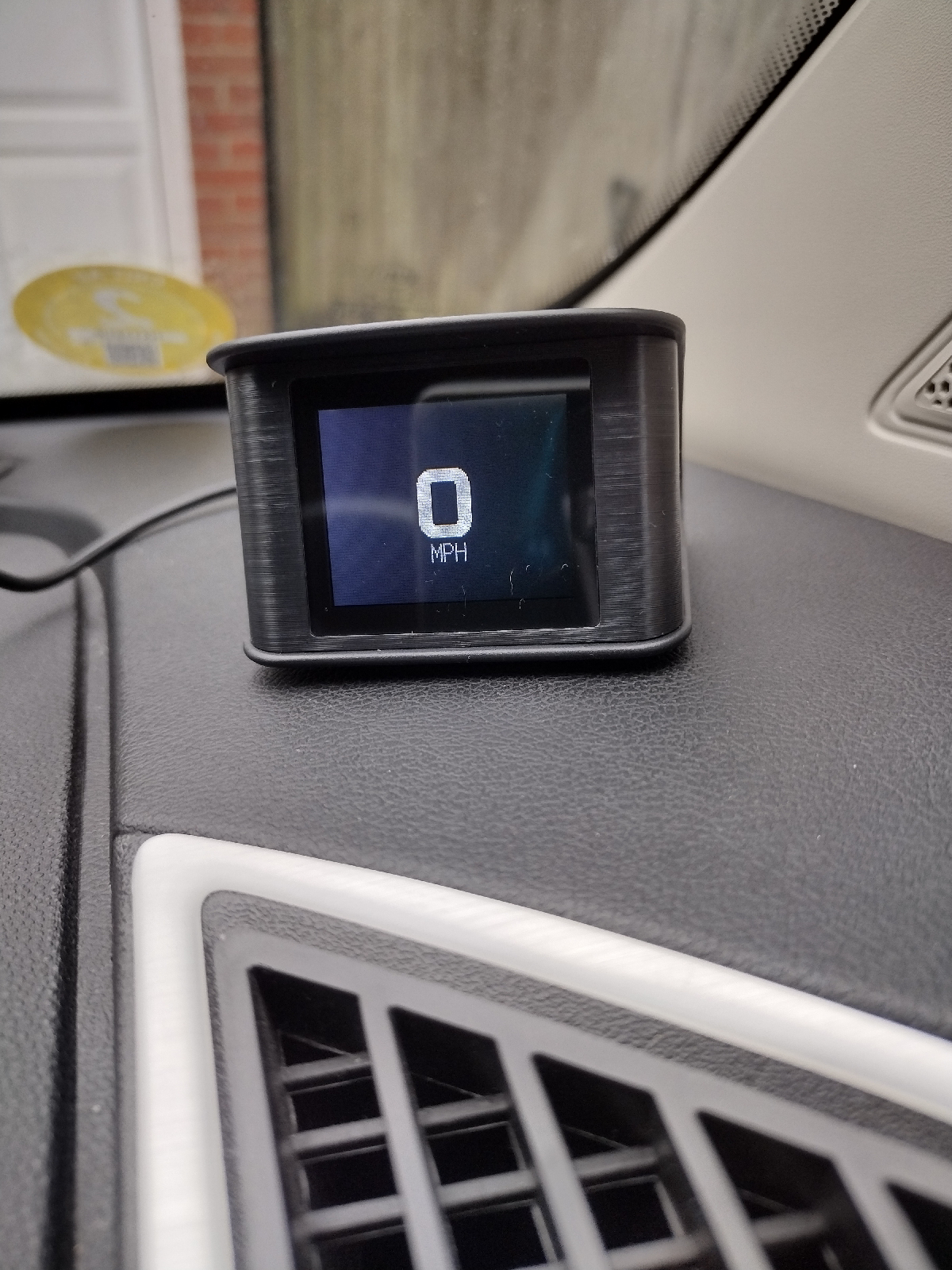 I had an email from Google/Blogger telling me that my blog, this very one, had been marked as a spam account.

There was no reason given for this assumption and I took the option to have it reviewed.  In the meantime it was not available on the web, nor were the contents available to me from the Android app.

I was also not given any opportunity to backup my decade's worth of post and photos. All my work could have been lost because someone, or rather, some bot objected to my updates.

This morning I had another email to say that the blog had been reinstated.

So was it a human complaint? Or was it a bot?  I guess we'll never know as there is no way to communicate with Blogger to find out what the problem was.

Taking the human out of the equation and bits will destroy the work of many honest people.

I think one of the problems with the charging of the TomTom on the cradle using the direct wiring is that the two pins on the mount are getting wet and maybe not working correctly.  I have given them a blast of WD40, a little blast, and see if that solves the problem.

Then I saw another V-Strom owner had one of these to cover the pins. Not cheap for a bit of moulded plastic but should do the job when the TomTom isn't in the cradle/mount. 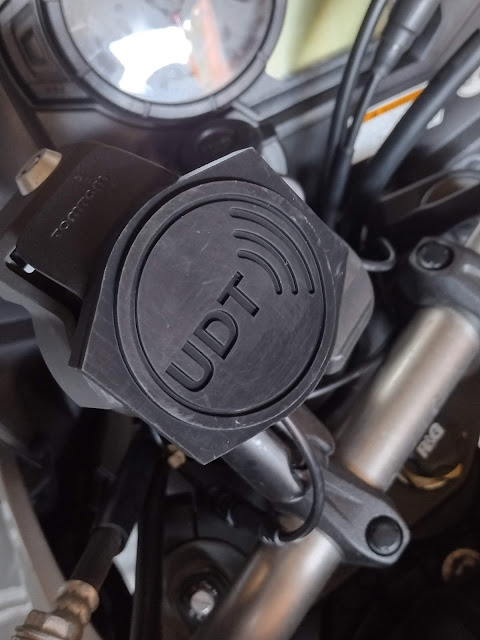 September has seen a lot greater mileage than I normally achieve in a month.
Over 2000 miles on the V-Strom and about 40 on the Kettle.
As I am unlikely to go out this week I have already registered my mileages on the Kilometerfresser website. 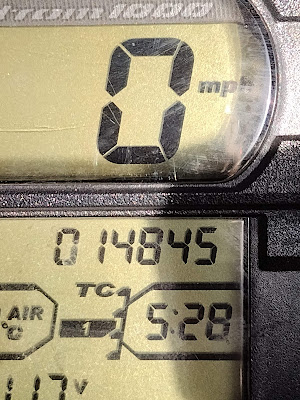 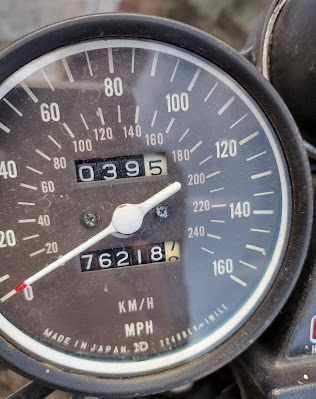 I checked on the website and they have me only logging just over 2000 kms for September.
The 1972 miles I did from Auchan in Calais to Aragón and back to the same Auchan would have been 3155 kilometres. On top of that I had the ride to and from Auchan from home, the ride to Bromley for the football, and any miles on the Kettle....
I put a note on the forum post to re-iterate MILES. After a mistake last year they asked for miles and not for me to calculate kilometres. The calculation figure doesn't match the odometer photos.... 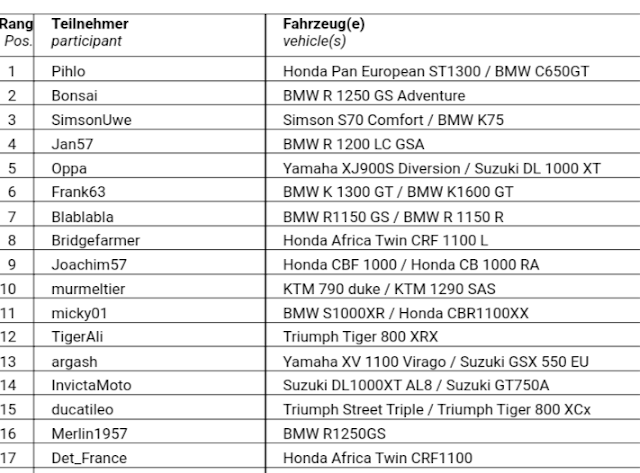 I doubt I will be 14th in the table as we progress through the winter into summer.
at September 27, 2022 No comments:

One small problem when at the wheel of Suki, our Elddis Majestic Moho, is seeing the speedometer from the higher front seats as fitted.
I think the standard seats that are fitted to the Peugeot Boxer are a little lower.
So I have invested in a HUD. Heads Up Display.
As can be seen from the Amazon advert it gets a pretty decent write-ups.
I really want it for when we are away in Europe as the Peugeot speedometer is analogue and even more difficult to work out how fast you are going in kilometres. 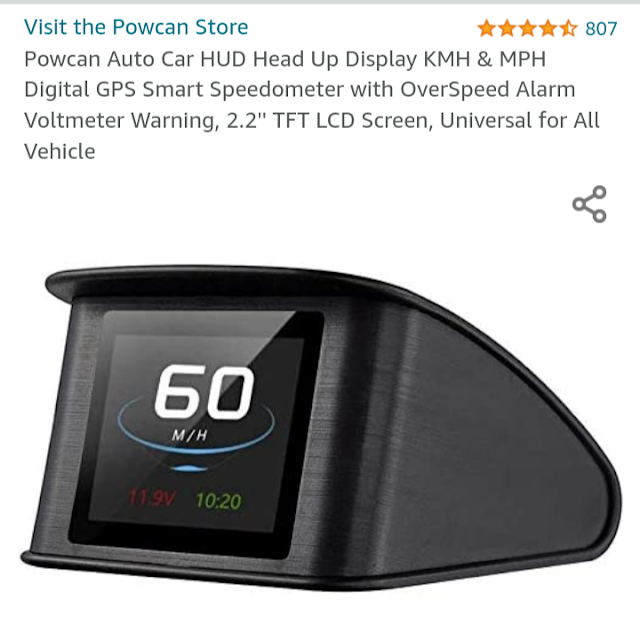 Was this stuff any good? Have no idea. It was ordered from Amazon and after two weeks of delivery being delayed I cancelled the order and asked for a refund.
It would seem that Amazon don't vet the people that use them to sell from.... This product was supposed to be despatched from Amazon warehouse!!
http://invictamoto.blogspot.com/2022/07/unlimited-passion-ultimate.html
But.
I have ordered again. This time on Amazon but from a different supplier.
Foolish? 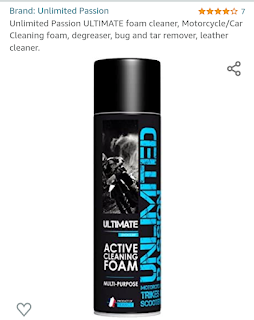 The ride up was pretty poor. It was very windy and rain was forecast.
So I decided to wear my cordura pants and FT jacket.  It seemed a good idea.
For a three o'clock kickoff i decided that I needed to leave around 1pm.
It was more like 1.20pm when I set off. The TomTom was programmed to get me to the ground. It was supposed to be 51 miles door to door.
It rained as I approached Maidstone but not enough to be too much of a worry.
By the time I got off the A20 it said 4.5 miles but 15 minutes to go. With traffic it was accurate.
I parked right by the visitor entrance nearby the Oldham supporters' coaches.
I was probably the most overdressed person there but luckily the weather turned less sunny to make it more comfortable.
As for the game?
It was shite. A new manager just arrived but still the same crap under achieving players that have been trounced in other games. 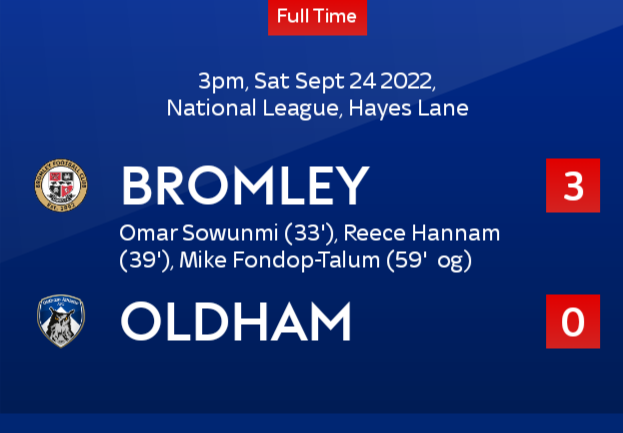 The ride home was a little better. Getting out of the car park was easy enough and even the run back to the A20 seemed quicker.
I stopped at the BP garage just before the M20 as unleaded is much cheaper than locally to home.
It was less windy. The rain had passed and I was home by about 6.25pm.
According to TomTom I had done 119.1 miles today at an average of 45mph.
The ride was better than the bloody game! 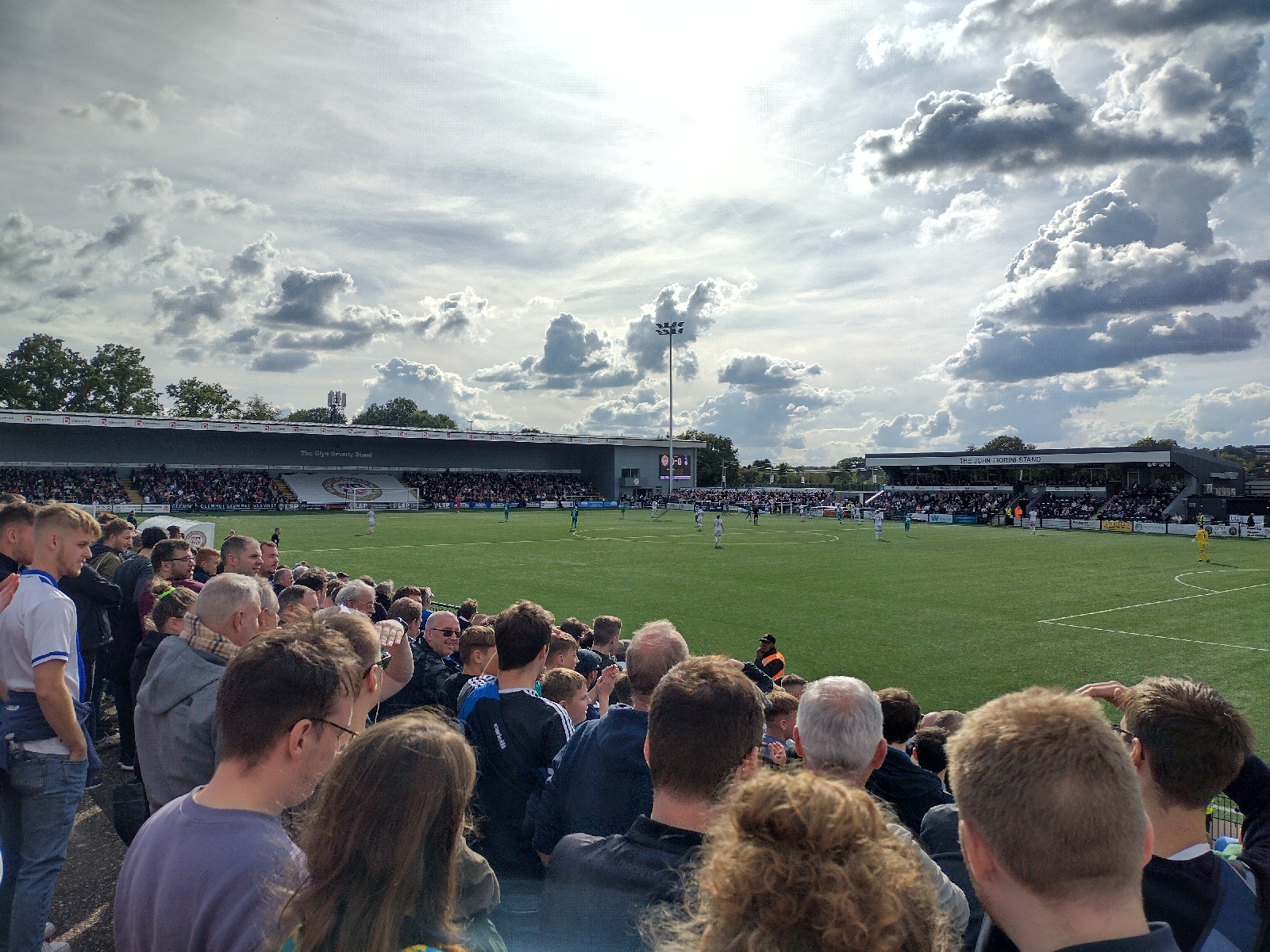 I don't usually bother other than to enter my odometer reading into Fuelly to calculate mpg.
Best mpg of this trip was 67.96 to the UK gallon.
A total of 155.513 litres bought during 13 stops and mostly burned... The final tank was at Calais and I have still a full tank.
The first top up was at Calais on the way over. Form Calais Auchan back again was 1972 miles ridden.
Another trip over and out.
at September 24, 2022 No comments:

A few photos from the Aragón trip. I became too lazy to do the blog for the trip. Plus there wasn't much time each evening.
Luckily my brother typed his up religiously whilst we were away. His can be seen over there ------> 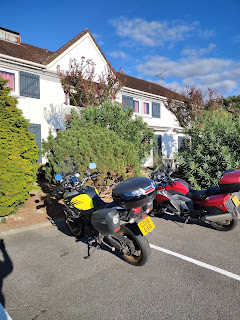 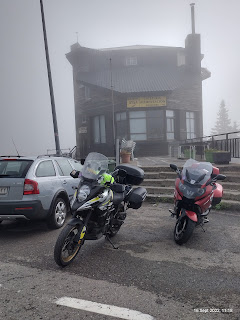 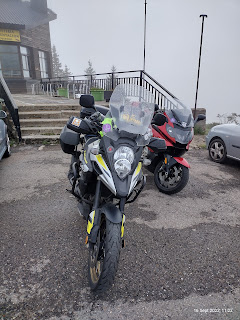 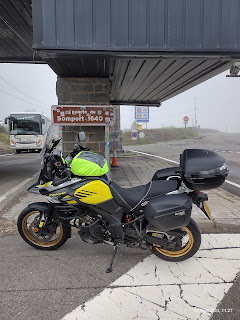 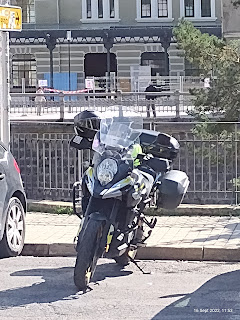 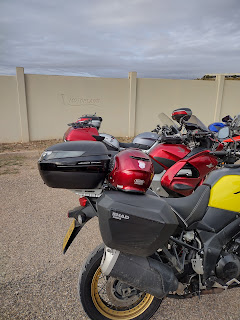 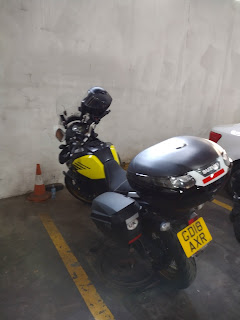 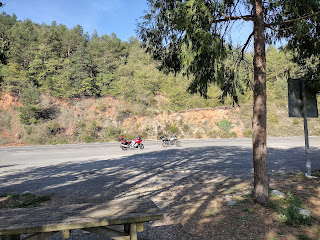 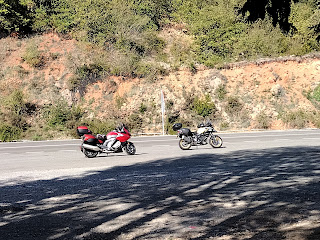 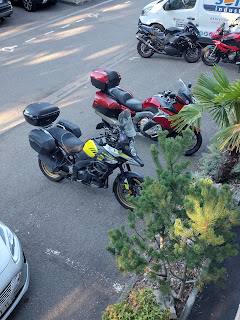 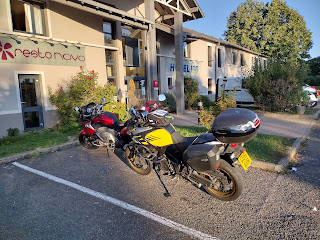 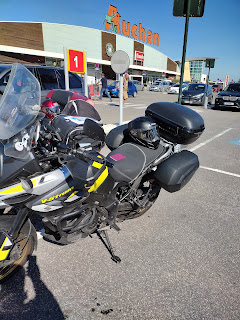 Amazing though it is, Blogger seems to have put them in the right order. 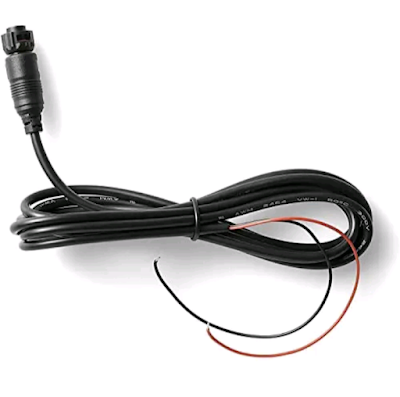 Since moving from the Rocket to the V-Strom I have been trying to get the TomTom mount, and more importantly the power supply, right.
On the Rocket I had a power socket on the left side of the engine near my left shin. I ran the TomTom lead from there to the mount in the handlebar. No problem.at all.
The V-Strom has a power socket on the dash panel under the rev counter. I cut down the long lead to make it shorter. The problem is when on full lock the clutch or brake hoses touch it and the connection is lost.
I have tried to find a shorter plug to keep it from contacting. But finding one is proving difficult.
I have tried powering it using a USB plug rather than powering it using the mount. Even with the lash up of the small plug and right angle connection, it's not powering all the time.
So time to resort to the TomTom lead from the battery. I had to order one as I had cut down the other.
The bike is due to go into Robinson's for a service and I will take it and ask them to fit it when they have the fuel tank propped up to work on the engine.
Hopefully they can connect the cable to somewhere that is only live when the ignition is on ...
at September 24, 2022 No comments: