This was written by my good friend Ivan Benda.

I first met him through his love for Suzuki motorcycles when I joined the Suzuki Owners Club in 1978. At first it was exchanging letters as Czechoslovakia was still under Communist rule.

I first met him in 1986 when my partner, Audrey, and I went to the FIM Rally in Hungary. We travelled through Czech and Slovakia to get to Budapest.

We stayed with him in his flat in Bohunice and then he took us to a spa resort nearer the border with Slovakia. Obviously in those days there wasn't a real border.

I went to the Czech Invader Rally a few times and over the years we have been many times.

In 1992/93 I went to work at the grammar school in Zastávka near Brno. Ivan was a good friend and helped me settle in.

And so to his email and picture:

" I am sure you are informed my homeland celebrates 100 anniversary of foundation just now ( Oct 28th ), so I am sending you a critical picture of "Crying Thomas Garrigue Masaryk the founder of our state" pointing our Czechoslovakian state. 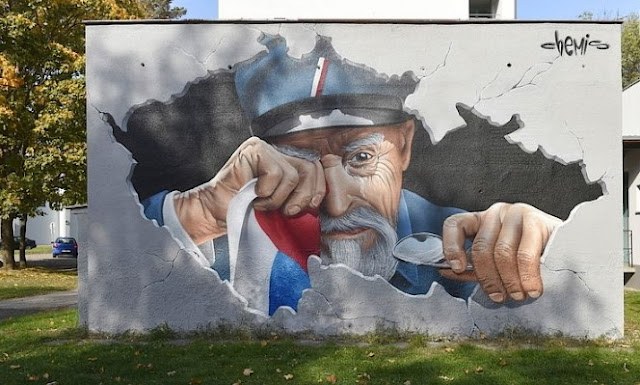 Hardly fighted out through Austrian-Hungarian Empire and after WW1.

Then the Slovakia after peaceful(!) splitting in 1993.

There is only  2/4 of the Czechoslovakia founded in 1918 now, the Bohemia and Moravia incl. Silesia). "

Since my return from Zastávka in 1993, I have been quite a few times. For visits to friends including Ivan, and for MotoGP.