One of my favourite pastimes is planning trips and holidays. At the moment I am looking at Norway. I think it will be a dream for this year and more chance next year.

There just aren't enough days available for that kind of distance.  So what instead?
By InvictaMoto - February 27, 2015 2 comments: Links to this post

I know it won't make me look as cool as the coolest man ever to slide a leg over a motorcycle.

Nor will it make me look like one of the last great movie stars from the age when men were men, and women seemed pleased about it!

But. It is a fine looking jacket - The Triumph Steve McQueen Collection jacket.

After penning a blog entry only in November last year regarding my FT Aqua jacket,  when I was being seduced by a £350 Triumph Explorer jacket, I have succumbed.

Not that Frank (http://invictamoto.blogspot.co.uk/2014/11/ft-aqua.html) will get the elbow, it is still waterproof at six and three quarter years of heavy use, but Steve is simply too gorgeous to be used all the time.

Steve came about as I saw a review of a leather version at about £400, and as I googled it threw up the eBay page of Total Triumph in the West Country.

And most importantly. My size? Oh yessiree bub!

I can almost imagine what goes through their minds as some women look (drooling) over flimsy shoes with red soles or a handbag carried by La Beckham.

How can a jacket, a mere motorcycle jacket, be such a thing of beauty? Buggered if I know.

In fact, so beautiful I didn't want to besmirch it by wearing it.

But soil its newness I did, but only in the house to let Claire see it.  It fitted like a glove, albeit a tight glove. maybe a prompt to lose some bulk? 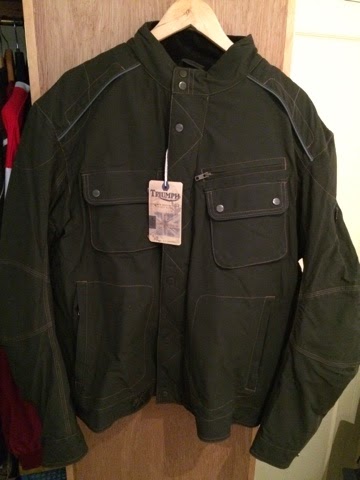 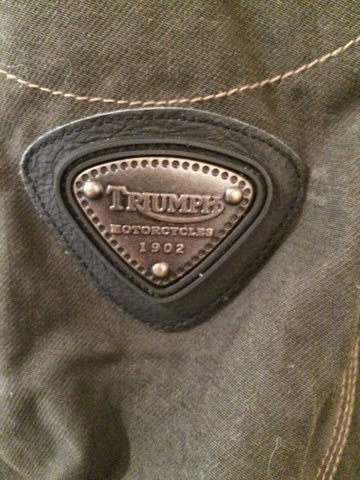 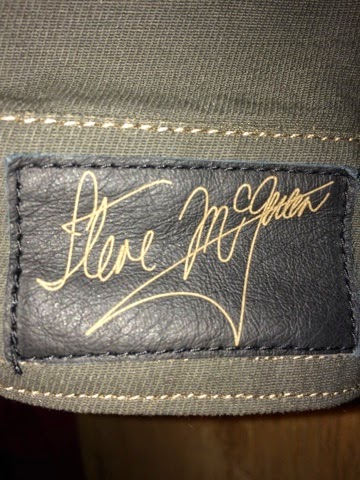 Roll on weather suitable for rubber to road interfacing.
By InvictaMoto - February 22, 2015 2 comments: Links to this post

Yesterday Claire messaged to say that Reggie was walking on three legs and carrying one.
When I got home he seemed to be favouring his left rear. I had a look and couldn't see anything stuck in his pads or between his toes and he winced when I touched them. 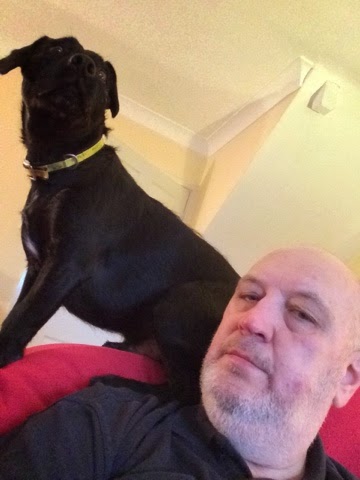 It looked worse as the night went on and he slept downstairs.
Things hadnt improved so I called the vet and took him in about 9am.
Anthony fiddled about and isolated the outside toe as being the culprit. Not broken but painful from being stretched apart. Some bruising and swelling. He gave Reggie a painkilling injection and we have more to go in his food from tomorrow.
By evening he was more quadrapod than tripod. Two days of this before he can run about like a loon again.
By InvictaMoto - February 19, 2015 2 comments: Links to this post

I had a few hours off after Reggie's visit to the vet (foot injury, no biggy) so I thought I'd fit the Givi tank ring to Döra.
The OEM bolts were not too tight. Three long one short. I took them off in order, clockwise, long, short, long, long.
I then present the "work" to where it should go. It's in three pieces. A lower metal half ring, sandwiching the plastic "cup" that the bag fits to and an upper ring. And here's the first drag, easily solved with a little sellotape. Just a small bit to hold the parts together. Smug. 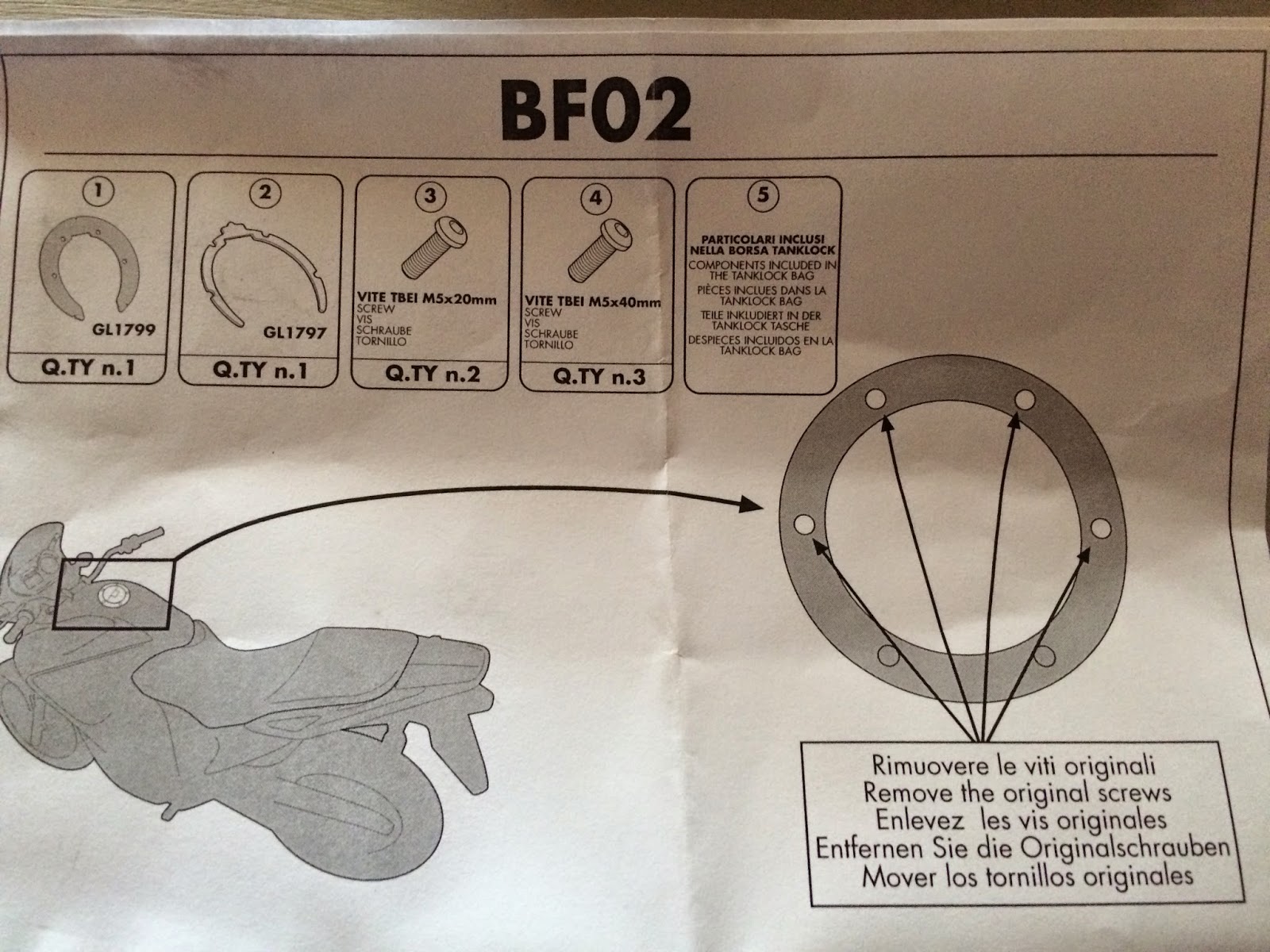 Then I slip in the new Givi bolts. Finger tight. Ah. The Allen key size is smaller than OEM.
I don't have an allen bit for my driver that small! Job reset. Back to standard. Simple job bollocksed by not checking tools first!!
Lunch.
In the end I checked all the kits and tools in the garage and had nothing to match. So I had a jaunt in the jalopy to town and called in the Hobby-Shop.  We had a few match-ups and it turned out it was a Torx T15 bit not an allen!
After that, five minutes and it was done. 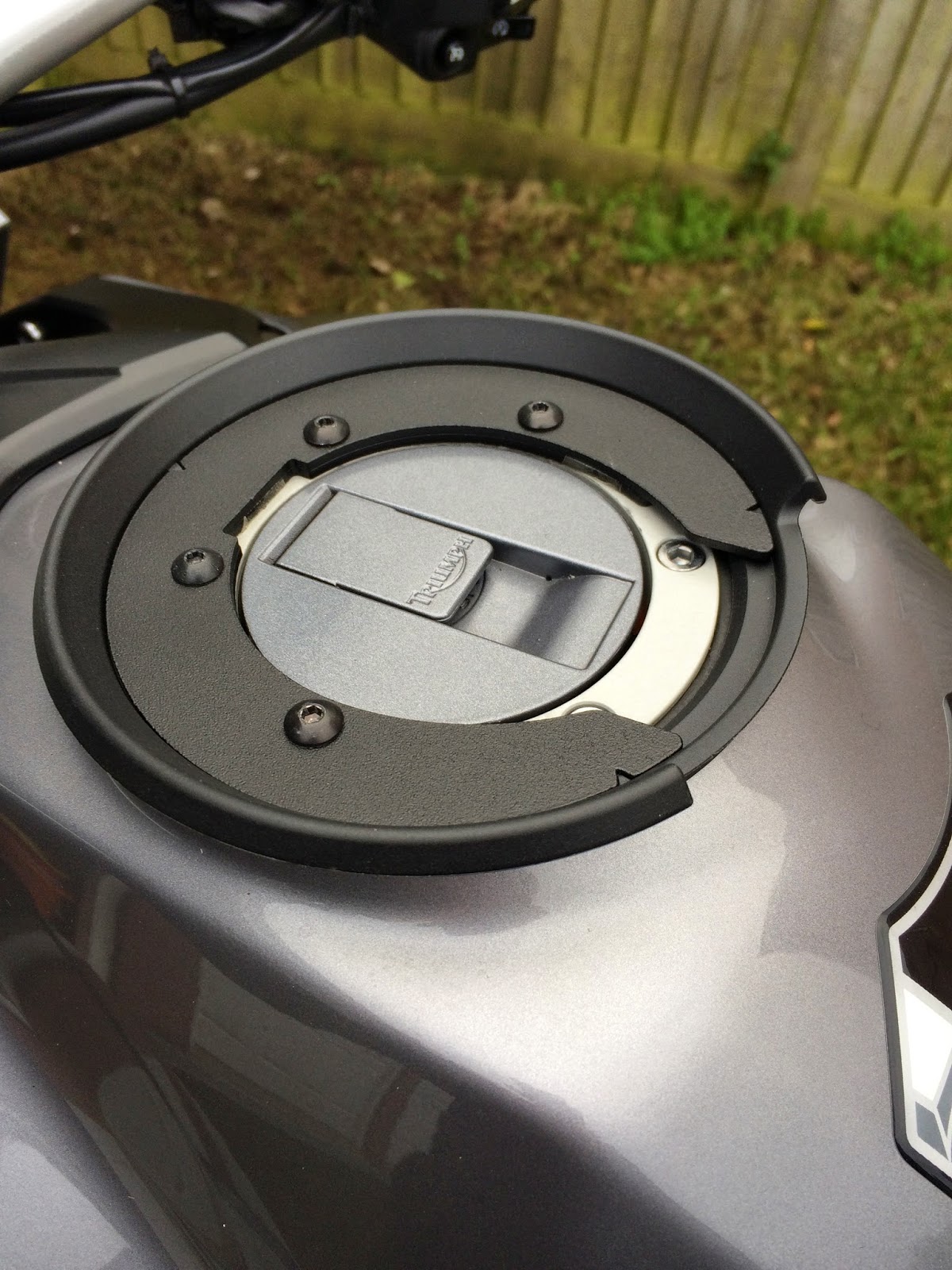 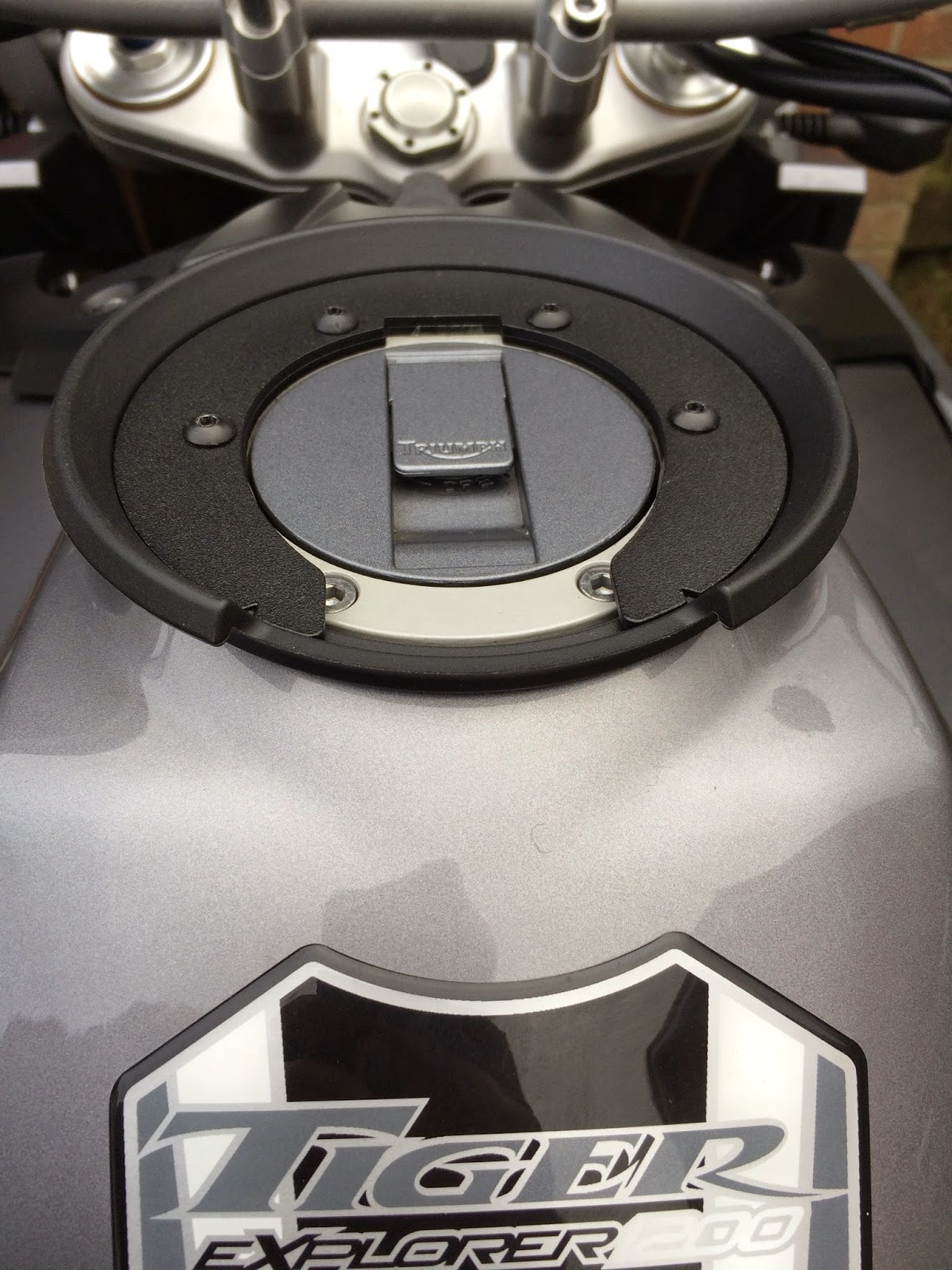 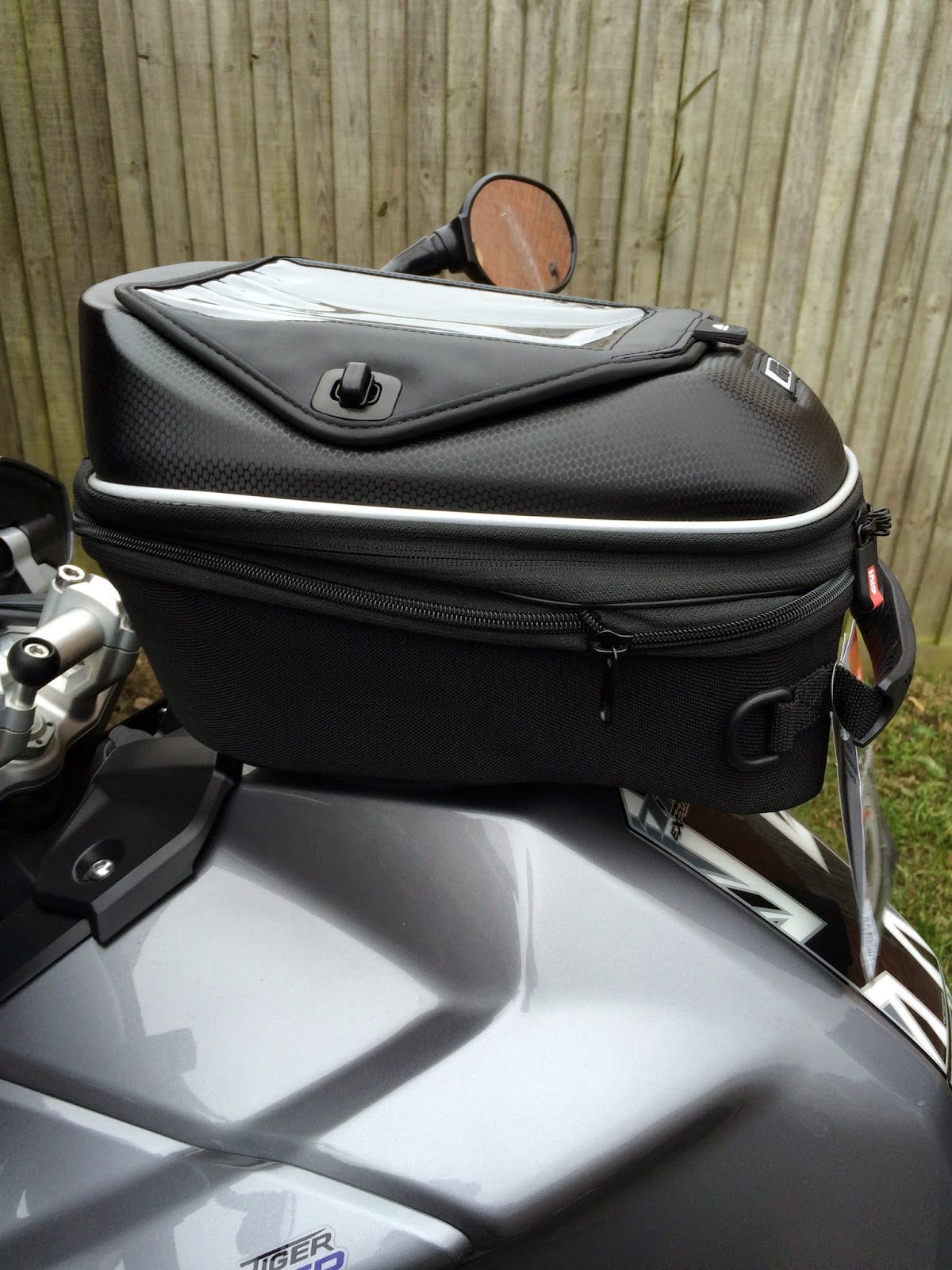 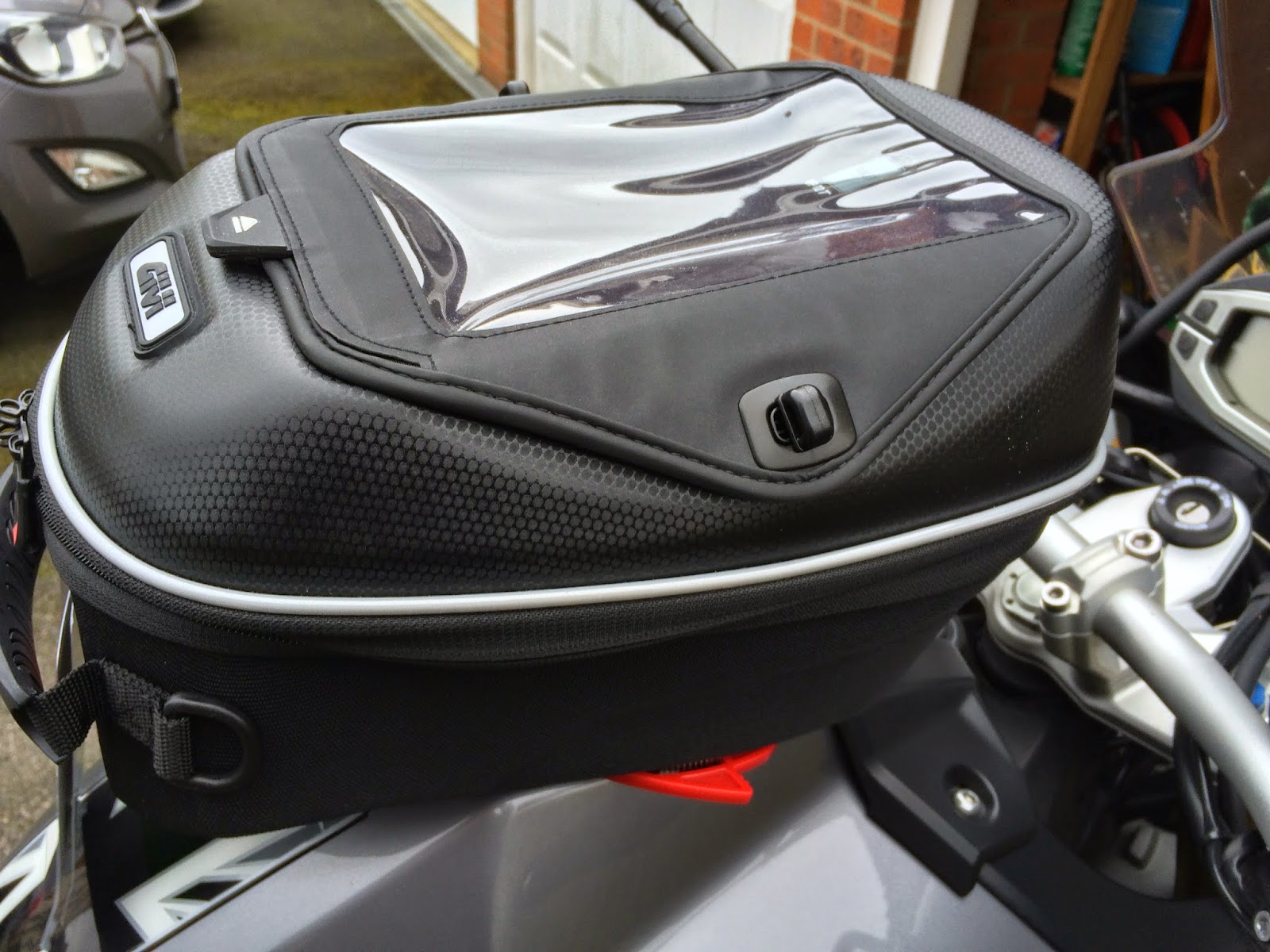 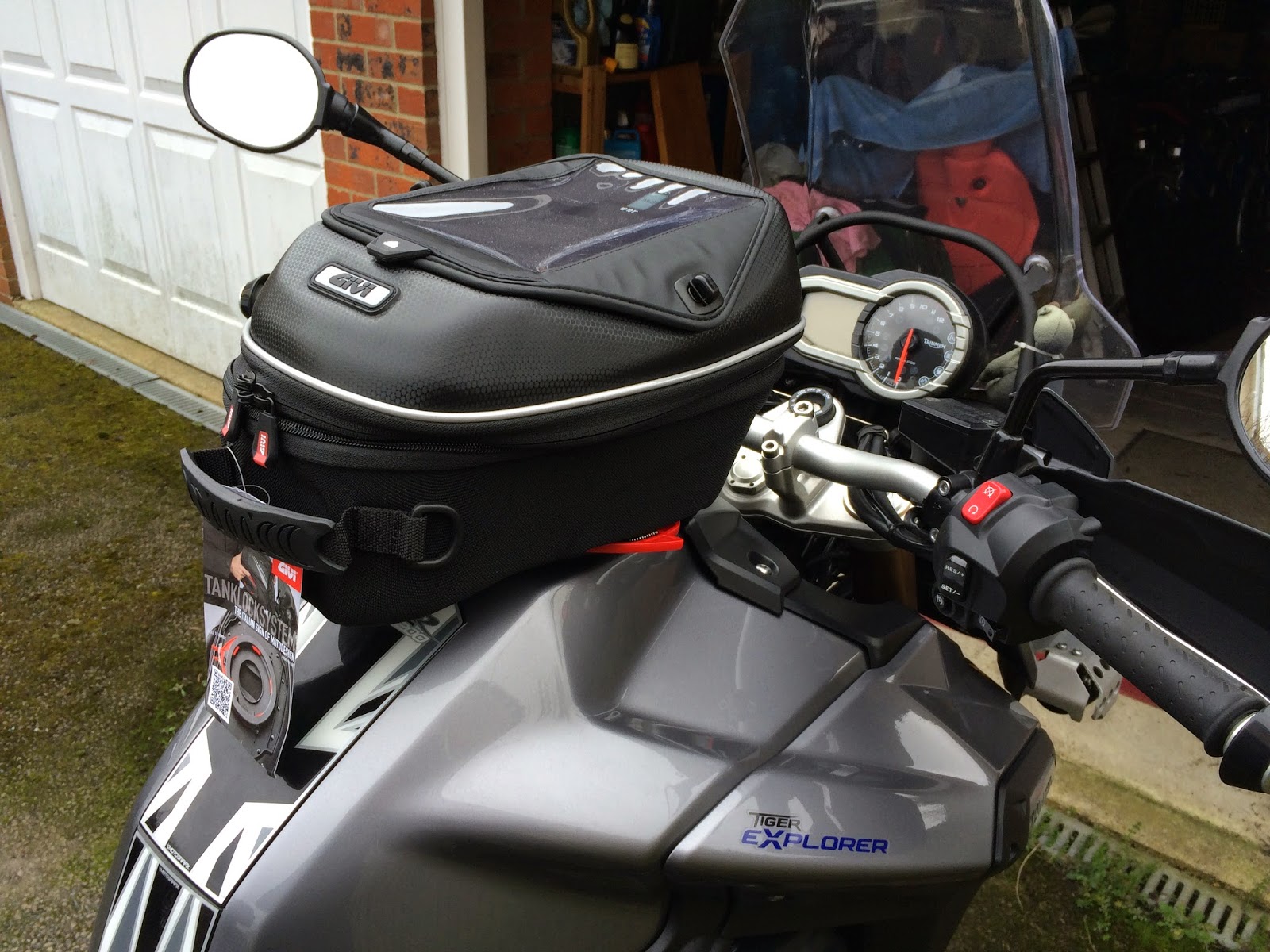 I have to say it looks really good. I doubt I'll use the top part that holds the 7" Tablet. I have a satnav but if I wanted to try a version on the tablet I might get away with it.  Another project?
By InvictaMoto - February 19, 2015 No comments: Links to this post

I googled to find a free movie editor and a few of the computer magazines (like PC Advisor) with websites and reviews and they pointed me towards MS Movie Maker.

I had a copy of a video I took of Reggie playing in the garden on the hard drive and so had a play to see if it could be enhanced. A whole five minutes and I had something a little better than the straight vid off the iPhone.

Shiny new iPhone 5S looks pretty good on the face of it.  Once home I connected it to the home wifi and the restore began again.

After a few restarts it finally ended at 0020. Good job I hadn't expected to sit in the shop until it was done.

Most of the apps restored themselves but not of the logins and some of them failed to work properly and needed deleting and re-downloading.

So far. A week later an no problems with it turning itself off.
By InvictaMoto - February 12, 2015 No comments: Links to this post

The new Givi tank bag arrived pretty quickly from Spain and Motocard.
It is actually bigger than it looked on the website and even when you imagine the dimensions with the aid of a ruler.
The quality can't be ignored. I like the idea of the "hard" material that gives it the shape.  It comes with a waterproof cover and a shoulder strap and is expandable for that extra pair of gloves or gift for the special person left at home.
I will fit the tank-ring to Dora on Saturday and take some pictures for the blog and also for the Triumph Tiger Explorer group on Facebook. 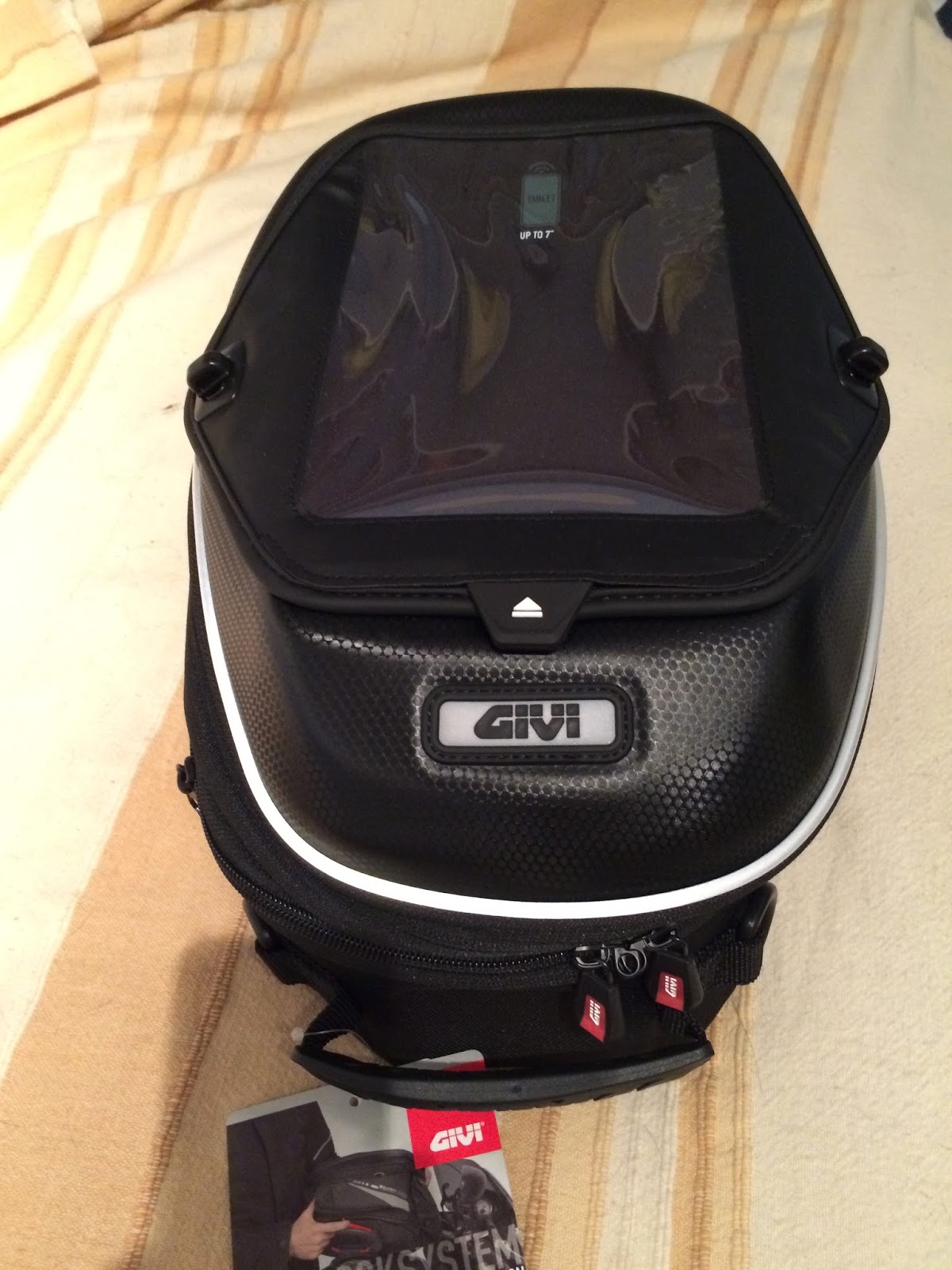 Email ThisBlogThis!Share to TwitterShare to FacebookShare to Pinterest
Labels: Givi

Something that I have avoided suggesting, but with Reggie to accommodate our weekends away in a hotel are surely numbered and so I started looking about for an alternative.

A work colleague in a similar situation, but child not dog, said she had been "glamping" in Cornwall, and they all really enjoyed it.

So with holidays to plan, I had a look for "dog friendly glamping" on Google and was surprised to find that there are so many places offering a glamp.

Glamping ranges from tents to yurts to cabins, caravans to pods - essentially anything where you don't  have to wrestle your own rent up and then sleep in the ground or blow up mat.

Saying all that in previous parts of my life I have loved to go camping, on holidays and on bike rallies.  In all weathers too, from days in Holland, when the outer of the tent was iced to southern Spain, when the temperature outside was over 35°C and considerably hotter inside the tent.

But not for a few years.

So as a taster before we commit to a longer session I have booked a one night glamp in a pod at a site in Essex.  It will be our first overnight with Reggie, so we need all his paraphernalia plus stuff for ourselves! Fingers crossed he is the "well behaved" dog they expect.....

Had a run out to the Blue & White to meet the other Meldrews and have a chat. I was a bit late as we were walking the dog on the beach at Dymchurch.
All in all, Döra managed another 20 miles!  Hardly enough time to warm the engine up. That's the problem when you have a life that seems to be getting busier and a £13k bike shut away in the garage.
Another balancing act where something has to give and sadly it is Döra.
By InvictaMoto - February 08, 2015 No comments: Links to this post

I tried the "dynamic view" option for the look and feel of the blog and came back to the standard template.

I don't like the idea that the "viewer" can change my page about to suit themselves.  I have a preferred layout and I want to stick to that!

Making your own entertainment...

Reggie ran out to play in the light sprinkling of snow. I took his toy off him as it is an "indoor toy" so he grabbed the watering can!

I took a couple of videos on my phone:

And then the watering can!

All handled very well. I arrived early and waited until the Genius came looking for me about 1730, my appointment time.

Went through the problem. He ran diagnostics. My battery in the red despite 92% on battery meter.

Off he goes. Next Genius arrives. Phone out of warranty so £59 please and 90 mins to wait.

Not happy but need phone. O2 do the phone over 24 months but it's warranty is 12.

Leave phone to be done.

Shame no Runkeeper app on work's BB as I walk miles around West End to find coffee shop with seats free and not full of the after work crowd.

Coffee in Costa. Read "The Black Echo" by Michael Connelly on my Kindle to kill time.

Head back to Apple. Short wait. Brand new phone for my £59! Happier but not ecstatic!!

Genius sets it up and kicks off the restore I took on their wifi from iCloud.

By now it's 1915 and so I leg it to the station. Dodging rough sleepers, drunks and tourists and make the 1942 train home.

Fingers crossed that when I get home and connect to wifi that the restore will restart as the Genius said it will.

It's unusual for the canal to ice over totally but this morning was the second day in a row. Yesterday one of the cygnets looked to be iced in place but must have escaped when it thawed later on.

Snow was forecast overnight but instead we had another heavy frost.

The car showed -4C when I started it. 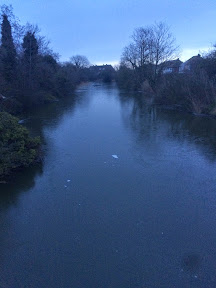