A little sad but this morning the ailing and geriatric Fiat Punto, N432 HGC, was taken on its final voyage to the scrap yard. The £90 I received from the scrapper was a small token.

I am a little sad I wasn't at home to see her go, but Claire was there.

Over the four year I have had her, she has until recently been a very cheap to run vehicle. Never costing much apart from exhaust systems that seem to be especially a poor. More a reflection on the quality of after market parts from the likes of National, ATS and Kwik-Fit rather than the build quality of the car itself.

The end of one generation and the start of another.
By InvictaMoto - January 31, 2014 1 comment: Links to this post

Lembit Öpik, the Motorcycle Action Group’s (MAG) Director of Communications & Public Affairs, has spoken out against the implied imposition of a mandatory helmet law for cyclists.  The threat has arisen as a result of the Advertising Standards Agency’s (ASA) directive to Cycling Scotland, requiring them to feature cyclists wearing helmets, and refusing to authorise a television advertisement which showed a rider without a helmet – claiming that to do so would be ‘socially irresponsible.’

Lembit says ‘in 1973, British motorcyclists suffered a hammer blow to their liberty with the introduction of a mandatory helmet law. Over the last four decades we have never wavered from our principled position of opposing this authoritarian regulation.  It’s not because we’re against safety; rather it’s because we’re pro-choice. At the heart of any truly free society, citizens have the right to make personal decisions about their welfare and the level of risk they’re willing to entertain.  No government has the moral authority to forcibly impose its opinion about what’s best for citizens, because such a move is counter to the very freedoms which democracy exists to uphold.  As such, we offer our full support to Britain’s cyclists in opposing the mandatory wearing of helmets.  This is a symbolic test of the liberty.  A defeat on this would be a catastrophic failure of politicians to respect the personal liberty of the people.’

MAG Chairman John Mitchell adds ‘I have instructed MAG’s Reps to provide whatever support is necessary to assist the British cycling community to successfully resist this ominous legislative menace. The ASA has effectively used its position to censor Cycling Scotland’s right to illustrate cyclists’ liberty to ride without a helmet.  They have evidently not got the right to veto the portrayal of a legal activity, but the precedent is extremely dangerous. Their action has reignited an issue which has been quietly smouldering for some time as far as motorcyclists are concerned. Make no mistake, we’re ready, willing and able to take this issue to the politicians, and I have no doubt that this debate will now extend to bikers as well as cyclists.  The Cycle Touring Club, which represents cyclists is firmly against compulsory helmet use, as it feels that mandatory helmet use will reduce the numbers of those people who take up cycling. What unites us all is our belief in personal choice. The very last thing elected politicians who ignore this can expect is an easy ride.’

I hadn't expected to get a new car so quickly and after a test drive on each of the ones I liked I have decided on one.

The Punto must have smelled a rat as this morning an intermittent electrical fault, that means the interior cabin light works when the door opens or stays on when the door is shut,  occurred.

I looked out of the front window about 6am to see the car interior bathed in light. I dashed out but although there was enough battery to light a bulb there was none to turn the ignition.

Worse still the key is coded to the ignition switch and there was a problem with that unlocking the auto gear shift interlock from park.

To engage park, the car needs to have the key in the lock and foot on the brake.

Some tugging released the gear shift and I was able to push the car back off the drive so Claire could get her Peugeot out.

That's where I left it. I doubt the battery will have recovered by the time I get home.

It looks like I'll need a taxi from the station this evening!!
By InvictaMoto - January 29, 2014 2 comments: Links to this post

Email ThisBlogThis!Share to TwitterShare to FacebookShare to Pinterest
Labels: insignia

Our trip won't be as long and (touch wood) casualties ought to be lighter...

Check out the full story at http://somme98th.blogspot.co.uk 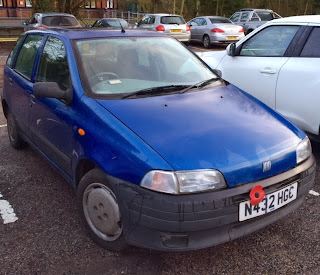 Somewhere in car heaven, a hand has turned the egg timer on my Punto and the last load of sand in the upper glass bubble has started to flow out.
By InvictaMoto - January 27, 2014 1 comment: Links to this post

No!
Yes.
Service Recall 505. All Explorer/XC and Trophy models are being recalled as there is a problem with the ECM that can cause the engine to lose power at certain times.
I had a small problem on the Belgian trip when the bike wouldn't start for a while and them was sluggish until it has re-warmed up.
Booked in for February 8th, the day before the Fred Hill Run.
http://motorbikewriter.com/triumph-recalls-trophy-and-explorer-motorcycles/ 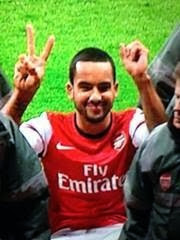 The month started well with the FA Cup Third Round defeat of "local rivals", Tottenham Hotspur.

The downside was Theo Walcott injuring a cruciate ligament on his knee.

Sadly he did this right in front of the morons purporting to be Tottenham fans.

Despite five minutes of abuse and booing, a display of class from the morons, Theo just made this gesture as the coins rained down on him and the stretcher bearers.
By InvictaMoto - January 21, 2014 No comments: Links to this post

I found myself volunteering to help organise this run.  Although the start point is 75 miles from home it is the right thing to do.

Fred Hill was an old guy, a principled old fellow that stood up for his beliefs. Although when I started riding my Dad was insistent that I wore a helmet, I supported the right of riders to choose.

Other runs on the same day  - http://www.mag-uk.org/en/eventslist
By InvictaMoto - January 13, 2014 No comments: Links to this post

Dreaming of a dry day

We have hardly had more than half a day of dry, at the weekend, when I am not at work and so Döra has been stuck in the garage.

Hopefully we'll get a chance this next weekend.

Whatever the weather we support our team. Through thick and thin, come rain or shine.

Today was rain. Almost constant cold rain that finds its way into any gear.

My brother Neill, it is he in the poncho pic, chose disposable made in China-wear.

I chose a showerproof jacket and jeans but la pièce de résistance was the bike over trousers. Dry down below despite the rain. Cap soaked through. Maybe next time a combination of Held bike waterproofs and Chinese poncho?
By InvictaMoto - January 01, 2014 1 comment: Links to this post