The combination of the "nothing wrong with it" returned from Netherlands 410 and the new car mount means that whilst connected to one of the car's power points the unit is now charging on the go.
On the trip to France we had only one problem where it turned off and wouldn't restart for a few minutes and when it did it thought the route it was following was to take us home.  Home at that time was 560 miles away. Once re-programmed to where we actually going, some 5 miles away, it was fine.
The only fly in the ointment is that the live connection using Bluetooth tethering from my phone to the unit didn't work.  I logged a call with TomTom and with 3UK and it turns out that 3UK blocked it.  3UK being my mobile phone "partner".
3UK operate a "feel at home" system where whatever you pay for in the UK, data and talk time ( I have unlimited of both & sms) works for no extra charge whilst roaming. But, they block tethering. I guess that stops people downloading huge videos and live streaming over the networks but it also stops people using satnavs and downloading live information once an hour.  The download can be measured in kb not mb or even gb.
This tethering allows TomTom's MyDrive system to keep the unit up to date with problems on the road and allow it to plot a new route to avoid accidents and other things such as traffic jams etc.
A shame that a decent and useful safety item is blocked by the mobile network.
By InvictaMoto - May 30, 2017 No comments: Links to this post

Email ThisBlogThis!Share to TwitterShare to FacebookShare to Pinterest
Labels: tomtom 410

The TomTom came back from its trip to Holland and back.  The new car mount arrived. And...
Success.  We have charging in the car.
Hopefully the trip to the Dordogne will be accomplished without getting the Urban Rider out of the bag.
By InvictaMoto - May 20, 2017 1 comment: Links to this post

Email ThisBlogThis!Share to TwitterShare to FacebookShare to Pinterest
Labels: tomtom 410

Who doesn't like a steam train? It might be an age thing but steam was King when I was a boy.

Then in the UK the government employed a guy called Richard Beeching to write a report on reducing the rail network.

But steam lives on at many heritage sites. One of these passes my garden: The Romney Hythe and Dymchurch Railway.
This weekend had guest engines on the tracks pulling the RHDR stock.

I took some pictures over my back fence. In fact I took about 100 on auto on the Nikon,  but the best pic is from my phone...

By some fluke. The pics are of the same engine in both directions.
.
References:
http://moneyweek.com/11-august-1968-the-last-steam-passenger-train-in-britain/
https://en.m.wikipedia.org/wiki/Beeching_cuts
http://www.rhdr.org.uk/ 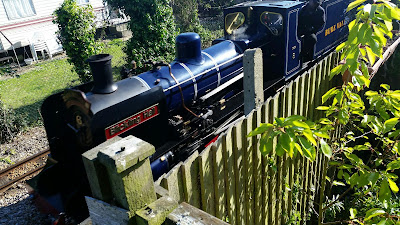 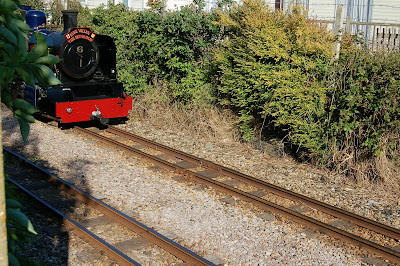 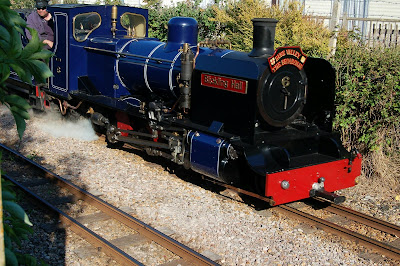 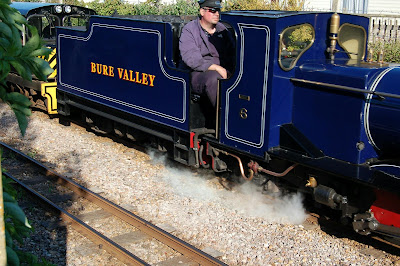 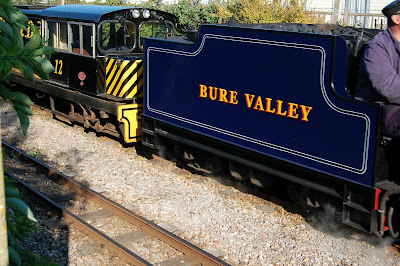 Once I had managed to remember the tyre details for the Insignia's tyres I had a search online for local fitters and get some prices.

Tyres now come with a scale from A to F for their efficiency in two fields, fuel consumption and wet grip. Ideally you will look for AA rated but once you see the prices then you start to go through the list to find the best rated at a price you can afford.

In the end I opted for these CA rated Uniroyals. Most of the online places had them but Asda came out the cheapest with an all-in price, and have a local fitter.  The most local fitters are only open weekdays and so I had to pick the second nearest.. A garage that although I have used for petrol on many occasions, I had no idea they did tyres.  We'll find out tomorrow morning.


One of the tyres is the original from when I bought the car in January 2014 and at the last MoT it was noted that it would need replacing although legal.  I've done about 25000 miles in that  time (below average mileage for UK) and it was obviously not brand new then.

The left front is newer. The original was destroyed in the accident of May 2015 when it came in contact with the kerb. They replaced it as part of the repair job to the entire right side of the car wiped out by KFC munching van driver. I've not been entirely pleased with it as it constantly needs the air topping up..

Having new valves might sort that out but in truth I have become less and less confident in them as they wear down.  I have never heard of the make either!

The chance for Arsenal to leave a rival behind and Arsene Wenger the chance to beat Jose Mourinho. My last game of the season as well. So a win was excellent.

I took the little Samsung camera and a few came out in focus. 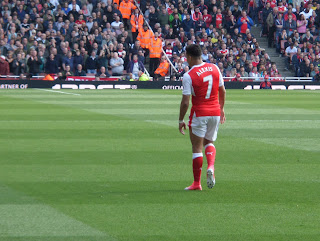 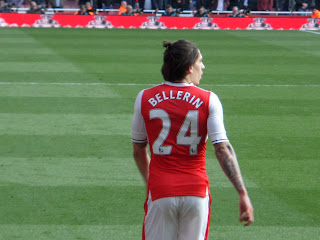 Match Report by the BBC
By InvictaMoto - May 07, 2017 No comments: Links to this post

With Hella plus in one hand and screwdriver in the other is fixed the power lead to the plug, ensuring a clean and tight connection.

Then out to the garage.  Plug in the bike's power socket.  I didn't fix the ram mount on the bike, preferring to lay it in the seat.  Sliding the 410 into the cradle I had a brief feeling that all would be good.

That lasted less than a second as the half charged 410 showed the battery icon but it was missing the lightning bolt to show it was charging.  A few moments of the air turning blue later I plugged in the Urban Rider's power lead,  Instantly the UR slid into its cradle it switched itself on as the power surged through it. So not the power socket then!

As the 410 won't charge using the car cradle the obvious conclusion is that it it the charging system in the unit itself from the pins on the back that connect via the different cradles.

I updated the call on TomTom Support. A few days later they replied and said to send it back using the labels they had sent before.

So my three month old 410 has never seen action and as the calendar moves on the warranty expires without it ever being used!  Marvellous.

A parcel arrived from TomTom. Seemed a bit heavy.  They had sent the RAM kit in stead of the Car kit!  Doesn't auger well for sending the 410 back.....

I parcelled the unit up in the bubble wrap lined envelope that came the other day from TomTom and with extra bubble wrap and it went back to them using the UPS labels they sent a few weeks ago.

I tried to track the parcel as I reckoned it wouldn't have got there but I wanted to see where it was.

Unfortunately all the links on the UPS website just say the parcel has been sent to the address on the label!  Some tracking that is #UPS!

Today have an email to say they have sent it back with UPS.  They haven;t said what they have done just that there is a letter in the box!  Mysterious.  Maybe it will work on the Dordogne trip after all?
By InvictaMoto - May 03, 2017 1 comment: Links to this post