It does seem strange to have put that in print. It is still actually over two years away but it hasn't stopped me thinking about what I'd like to do.

For Claire's landmark we are off to Florida for two weeks in May '14. I guess to international jet setters it's a little "provincial" to be planning a transatlantic trip.

Hell,  I know people that go every year to Orlando, sometimes twice; never tiring of going to theme parks.

So special then for me is not so special for others

On a biking trip. Route 66? PCH? Or maybe further afield.

Or away from biking altogether and enjoy a cruise?

On the biking front I looked at a few websites that hire bikes, and others that do tours, both fully organised or self-guided.

The PCH on self guided is £1950 per person, and that includes booked hotels, hire of a Harley and some basic insurances and a road book. On top of that we have about £400 to increase insurance to effectively be able to wreck the bike and walk away with no more to pay. And that's for a 2 week trip/rental. Air fares extra.

So, after seeing James Cargo in the last edition of Adventure Bike Rider, I priced up a trip using Döra as my bike of preference.

Air freight into key cities like Chicago and Seattle is about £1000. And here is the rub.  You can get in easily enough, but getting out more complex and so James suggest sea freight back!!

Then again I do like the idea of the Polar Circle and Norway.....

Email ThisBlogThis!Share to TwitterShare to FacebookShare to Pinterest
Labels: Döra, US

Movember - Donations starting to flood in!

Donations have started to come in for Movember. My personal Mo Space is mobro.co/invictamoto

Tache growing starts with it all off on Thursday night ready for 0000h growth start.
By InvictaMoto - October 29, 2013 No comments: Links to this post

Email ThisBlogThis!Share to TwitterShare to FacebookShare to Pinterest
Labels: movember

Another early date for the diary.

The AMRR will be on June 28th 2014 and as usual the meeting place will be the Cambridge  Service area on the A14, to the west of this famous University city.

Our local group plan to meet as usual at Nell's Café on the A2 at Swanscombe near Gravesend to leave about 0930 or so.

Depending on the traffic through the Dartford Crossing it only takes about an hour to cruise up there.

The last couple of years have seen plenty of hot dry weather. Let's hope for more of the same in 2014.

Compared to the Ride of Respect, the AMRR is a more intimate affair.

Having done the first three ROR's at Wootton Bassett, I much prefer the smaller run to Cambridge. Same idea though to raise money for our ex-servicemen and to pay respects for their sacrifice.

It's NOT about glorifying war at all.
By InvictaMoto - October 29, 2013 No comments: Links to this post

I am hoping that the weather behaves itself this year. last year there was snow that ended a lot of biking activities, and put paid to any ideas I had of riding 40 miles across the county in the cold and slippery white stuff.....

Anyway, this year the run is the 30th Anniversary Run. It should be a bumper occasion and I am hoping that more people make the effort. It is certainly impressive to see the 300 plus bike, trikes and out fits hit the road.

The Kent Centre will meet for brunch at the Blue & White Cafe (our usual monthly meeting place) and then motor over to Whitstable. If you see this and want to come, look out for the odd Suzuki and loads of other makes outside the cafe. We'll be there from about 11am and leaving the cafe about Noon for the ride over. 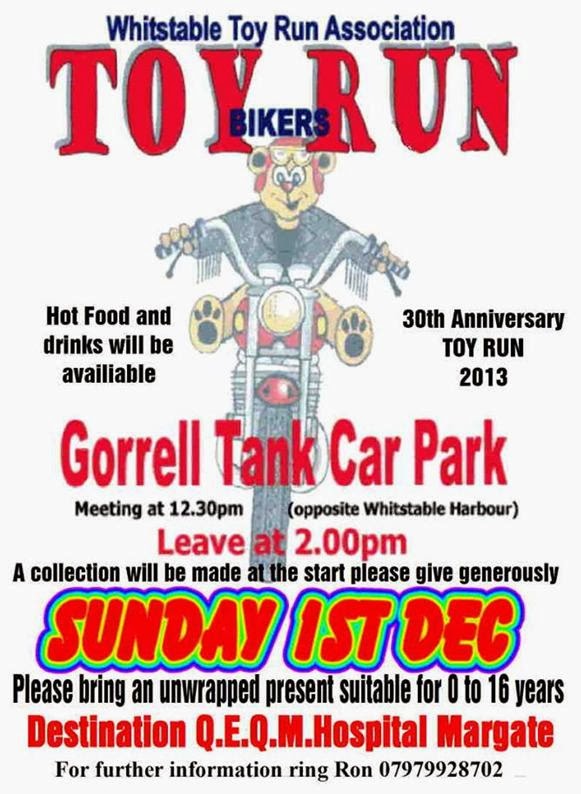 A little more successful retail therapy, the tank pad.  Fitted on easily once the Triumph warning decals were removed. 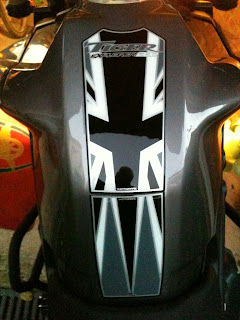 Arsenal in the Community

The plan was to meet outside the Armoury at about 4pm.

There was quite a group there already and I had that dread feeling as I was not only the oldest there but was one of the few not recruited from fairs in University Freshers Week!

The organiser, John, led us round to the Learning Centre,  that in Islington ICT we know as Arsenal Red Zone.

The first hour was taken up with John outlining the different schemes that AitC run. All of them ally learning with football.

At 58 (soon) a career in football coaching might be a tad too late.  I did it for a while. I learned that parents are terrible and even the worst player gets a game if his dad has a car for away games...

I'llbe more suites to literacy but a bit off footie as well? Why not.

We had to fill in the DBS firm so they can check with the police that we are safe to work with children. I have a brand new one at work as I visit schools all the time, but Arsenal require their own.

Once the options were done and dusted, we had an hoot going around the Stadium on the tour. 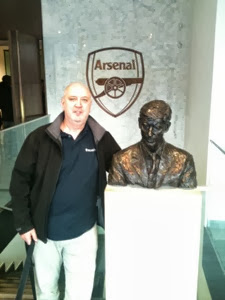 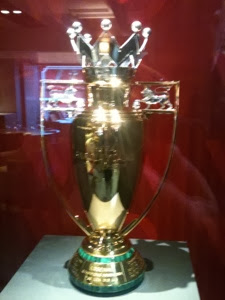 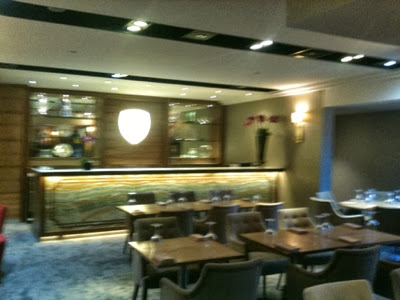 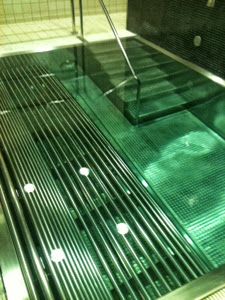 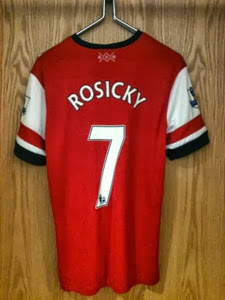 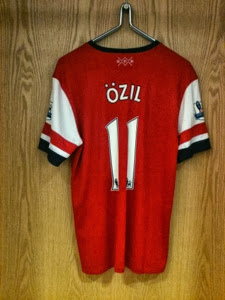 From the top: Me and Arsène, the Premier League Trophy, the Diamond Club bar, the £100k hydrotherapy pool, the shirts of Tomas Rosicky and Mesut Özil.
By InvictaMoto - October 24, 2013 No comments: Links to this post

Email ThisBlogThis!Share to TwitterShare to FacebookShare to Pinterest
Labels: Arsenal, arsenal in the community

Arsenal in the Community

It maybe a little premature releasing that I have been accepted for the volunteer training with "Arsenal in the Community<http://www.arsenal.com/the-club/community/about-arsenal-in-the-community>" scheme, as my first session isn't until tomorrow evening.

As an employer Islington likes to have staff volunteer for things that improve the lives of local people, although there is a limit to the hours that they will pay you not to be at your desk, so if I am accepted I will have to fund the time from my own pocket and work extra hours in the office to build up flexitime to be spent on volunteering.

Although my footballing days are over..... I am hoping that there are other things I can do on the educational side of things. Gulp.

Email ThisBlogThis!Share to TwitterShare to FacebookShare to Pinterest
Labels: Arsenal, arsenal in the community, islington

I booked Eurotunnel today for the car to go on the Saturday very early (for us!) and return on the Monday late.

Monday is actually my birthday so hopefully we'll get chance to stop off somewhere and have a decent lunch, forgetting Slimming World for a few days.

Sixty one days away apparently.

The journey is about 380 miles form home and we should be able to knock that off easily enough in the car. Now I am praying that there is no snow before Christmas.  At least the hotel can be cancelled at no cost, but we'd still have to use the Eurotunnel crossing! 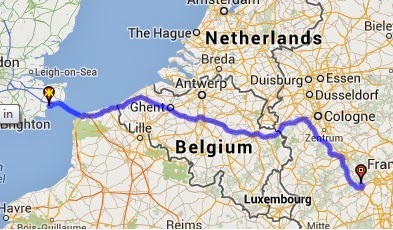 And the hotel is: Hotel Traube.
By InvictaMoto - October 22, 2013 No comments: Links to this post

Unfortunately, the Touratech part didn't come up to the spec I need. The central bar for the RAM mount is way too thin to be any use so I need to send it back.
They have agree to take it back but of course it will cost me the postage, both ways.  Touratech UK very efficient and same day as the return they refunded the money to my PayPal account.
So back to square one of where and how to fix the RAM mount so that I can get full right lock when required.
C'est la vie.
By InvictaMoto - October 22, 2013 2 comments: Links to this post

It's a bit early to start wishing everyone a "Froehliche Weihnachten", but it is essential to the planning that is currently taking place.

Please do not snow until after Christmas. That's all I ask.

Claire has always wanted to go to a proper Christmas Market. We have them in the UK but maybe a nice German square would be better than a faceless shopping arcade in London?

I am looking at the one on the Rhine at Rüdesheim.

I have made a pencil booking on a hotel on the river front with booking.com and that has the usual cancellation policy.

Booked the Carathotel Traube Rüdesheim in the end but still with the cancellation option.

Although never a fan of the overuse of stickers on bikes and those "I've been everywhere" covered panniers, I have a love for the humble Toro.
And this silver one is the daddy of small pannier friendly bulls! 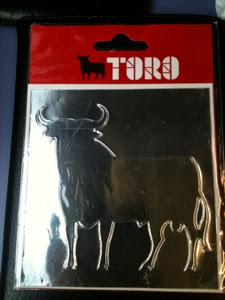 Döra is yet to explore Spain but I have and the Givi toolbox has over 250000 miles under it's belt, with many visits to the Iberian peninsular!
2014?
By InvictaMoto - October 18, 2013 1 comment: Links to this post

The report and photographs from the Thankful Villages Run.

When we got back to the Malagacar offices there were so many people out front I ended up driving in the out door as it were and parking inside the warehouse.

On handing the key back to the guy on duty, I told him about the problem we had.

"Oh the battery has gone" he said.
"Yes, I know, it hasn't worked since I picked it up" I said.

He shrugged and said that they'd get it fixed.....

Still, the entire rental cost €138 in the end, at the exchange rate that make it about £17 a day including petrol. Pretty reasonable. I bet Florida won't be as cheap next year!

So would I recommend Malagacar.com to anyone. Most definitely.
By InvictaMoto - October 12, 2013 No comments: Links to this post

One discovery made late in the week is that the Aygo has a USB socket under the dash that can connect to the iPod.

Without a manual is was difficult to get it to work as it seemed to choose anything from the 30gb I have on the Classic.

With the iPhone it did play what was selected!!!

Email ThisBlogThis!Share to TwitterShare to FacebookShare to Pinterest
Labels: aygo

Okay that is harsh.

I read in a car magazine that a good way to find out if you like a car was to hire one and see how you get on with it.

On trips to Spain I always hire the cheapest car. Not because I am tight with my wallet, just that small cars are fun (!) and we don't need a big guzzler penis extension car.

So when I checked the Malagacar Group One box the options were Ford Ka, Fiat Panda or similar.

We have had both of these before. I like the Ka but not enough to buy one. I love the Panda and may yet buy the latest incarnation, having owned one for the best part of 140000 miles...

But similar meant a Toyota Aygo. Tiny boot (trunk to the colonials) but can seat four human adults. 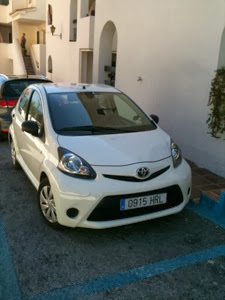 Tinny, not very powerful but good for what we need.

The hire car has a few problems:
Okay. Not that difficult and for a week simply a nuisance.

But this car has covered less than 7000 kms since we collected. Can an owner expect the same quality? I hope not.

Maybe this Aygo is the Friday afternoon special when the Japanese car boys were a bit too demob happy?

Or is this just a crap economy car that carries the Toyota badge?

Started last year and continued into this and who knows how much longer.

http://devall-espana.blogspot.com
By InvictaMoto - October 06, 2013 No comments: Links to this post 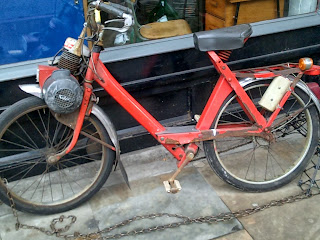