... And another win. It seems such a long time since we beat the blue scum although over time they are over 20 wins behind us.

In fact, there have been more drawn games than Chelsea wins!

This one was hard fought. Our fans spent the whole game berating Ashley Cole. We have had players leave before, but none have been as nasty as Cole.

So he gets what he is due!

In the end we should have won comfortably, we must have had most of the possession but it was a mistake by Cech that led to William Gallas heading the only goal.

I need to see MoTD2 tonight as we had the ball in the bet twice more that Wiley (the worst ref I've seen this season) disallowed.

In the end it looked as though he was doing whatever he could to let them equalise. Wanker!

Still we're top of the league! 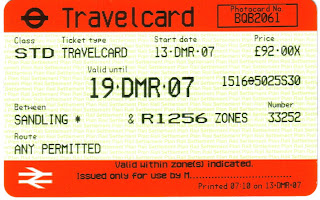 After a few days, okay 5 working days off with flu, I set off this morning.

I got as far as Sevenoaks and started to feel sick, eventually after a coffee I felt no better so I struggled home again. If I hadn't bothered I would have saved the £92 (for now anyway!) for my weekly season ticket (photo attached!) and the £6.90 for the taxi from the station!