Once again held at the National Exhibition Centre or NEC, in Birmingham, the show is the showcase in the UK for the new models and all the manufacturers from large to small are there.

For me it would be a 350 mile round trip and the reason I've not been for a few years.

It was my turn to drive so I set off before 8am to drive the first 35 miles to my brother's house. Traffic was light and I arrived about 8.35am and once the TomTom was fitted we set off, filling the tank locally and then off north.

We made good progress and were parked a little before 11.30. We chose the station car park as it is a covered walk into the NEC and is £6 whereas the NEC's own parking is free to bikes but £12 for cars.

After a bit of hassle when I couldn't find the email confirming our free tickets and then we were in.

We usually go in and the plan is to go up and down the rows until we have done everything.

We visited all the manufacturers from Aprilia to Zero, sat on a few bikes, and fitted in lunch and a drink.

The Harley stand was impressive with the usual £20 grand tourers, and Triumph aired the new liquid cooled 1200 twins, but it was the Japanese that seemed caught in last year mode. Nothing leapt out at us.

Honda had the Africa Twin. But with the Crosstourer in the range already it seems like a wasted effort and too late in the day. Plus it looked average.

The other three just seemed to be going through the motions.

There were more Chinese factories showing their bikes. Some decent looking stuff and very competitively priced but still not quite there yet. It won't be long though.

The MV Brutale and the new adventure bikes looked nice but the Brutale lives up to it's name with a hard seat and uncompromising pad at the front of it.

Some of the museum and insurance company stands had some exotic and engineering marvels.

Above is a Millyard Viper V10! Another of his specials was a water cooled engine on what looked like an FS1E chassis.

Of course it would be bad form had not many of the stands featured promotions staff.


After a chat with David and Gary on the HC Travel and Orange & Black stands we set off home.

The weather was pretty awful on the way home and it was nearly 9pm by the time I got home.

A tiring day with for me about six hours driving.

And lastly, a couple of pix taken by Neill of me and some expensive Guzzis.

Quite nice but the tourer is very much in the H-D price bracket.

Around £18k for a naked no luggage bike is very steep.

A big thank you to the person that ran into my car at Sandling station sometime on Wednesday.
I only saw the bumper had popped its  mounting on the left rear when it was under the bright lights on the Waitrose supermarket car park. Then with the torch we could clearly see the impact mark and the crack in the plastic bumper.
Well done whoever you are. I can only hope something really nasty befalls you. 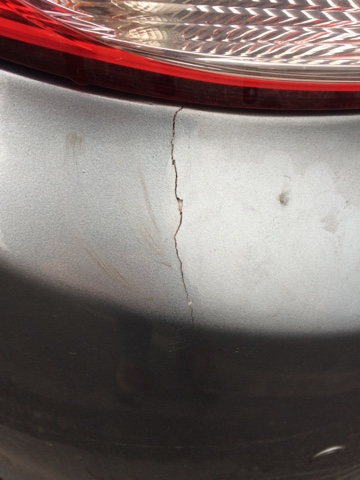 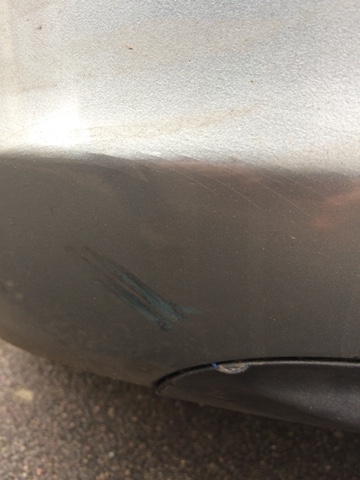 The "bike show" as most people cal it starts at the NEC in Birmingham tomorrow for the press day and on Saturday to the paying public.
I won two free tickets a while back in a competition and we have to pick the tickets up from the press office on arrival.  Not a huge prize, no quite the lottery but about £30.
It's my turn to drive and so I'll pick my brother up about 0830 and head up there.
According to Tyre it's about 190 miles each way. Quite a long day.
By InvictaMoto - November 26, 2015 1 comment:

It seems to be a biker or road user, an action cam has become the accessory of choice.  Cyclists wear them to show how bad other road users are and bikers use them to show how their rides went. Mostly boring I expect!  If they are anything like my tests.

I bought this one from eBay for £17 inc postage from China., It,is not much use for mounting to a motorcycle but perfect for the cyclist and their style of helmet. On eBay now the SJ4000's go from £16.99 to more like £44.99! I can't see the difference between them and mine, whatever the price.

I bought it as a replacement for the Denver I bought last year.  The Denver kept going wrong and I keep it as a backup.

Dropping it on the garage floor didn't help.

Whereas the Denver was wifi equipped and has an app on my iPhone (and Android) to set up and view movies, unlike this one it doesn't come with small LCD screen. 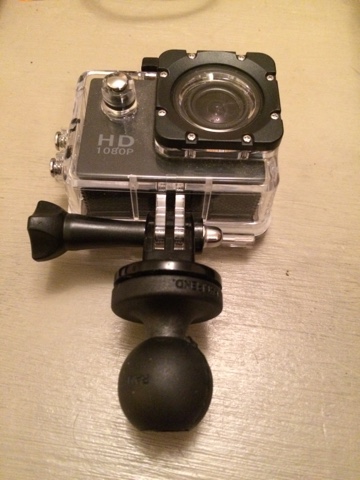 It comes with the waterproof case and I had to buy the plastic ball mount that will fit to the RAM Mount one the handlebar that usually mounts the TomTom.

To charge the battery or remove the ad card, the waterproof case has to be removed. That proved a challenge out of the box! 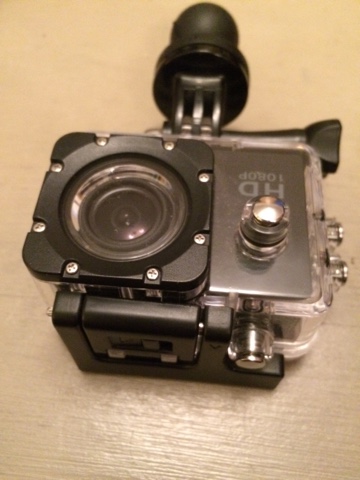 The screen on the back is very useful and is where the menu can be accessed to set it up. It has taken a few tests, as the manual is totally rubbish, to get it to record for more than 20 seconds at a time.

On the test in the lounge it carried on up to 50 seconds and so I turned it off. 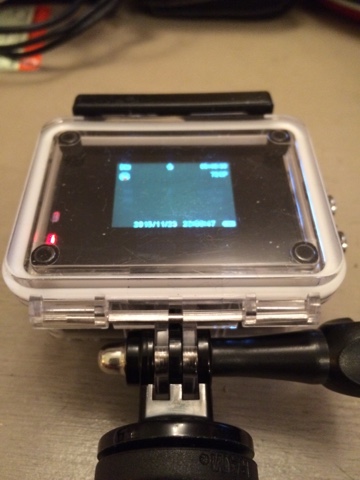 The screen also allows you to see that it is pointed in the right place and also to review the movies you have taken.

Now that I have worked out how it works, I have set it to 720p as it is more economical on storage than the higher setting, 1080p HD video. I have a 32gb SD card in it and I will see how big themovies  get and maybe go to 1080p.

I do have a 64gb micro as card I bought for another movie camera that I'll try in it. I expect the battery will run out before the memory!

I'll have to see what videos I can get on the St Nick's Run in a few weeks,

Today Claire was meeting her sister for lunch and a quick look around the shops...

Reggie and I went to take her and have a walk and lunch ourselves. 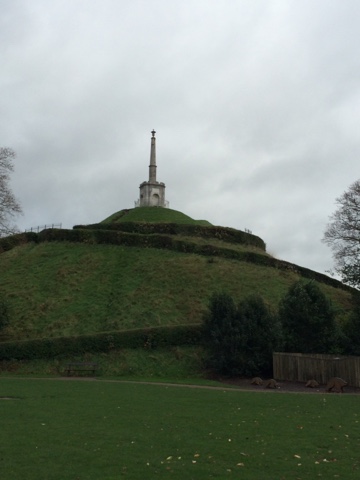 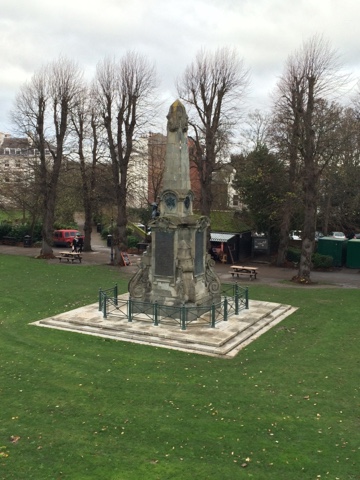 First stop was the Dane John park in the drizzle. The park is inside the city walls and has several monuments. Pictured above.

After Reggie had spied a squirrel and tried to follow it up a tree I needed a coffee. Luckily, the Don Juan cafe in the little kiosk was open. This is quite unique as a South American cafe. I had just a lattè, but the menu includes different choices from Argentina, Venezuela and Colombia.

I had planned to have lunch in a pub across the city but with it drizzling, I checked the doggie pubs website and found the White Hart. A quick call confirmed that dogs are allowed in the bar. In fact it was nearer than I had imagined. Back at the car park as I waited to cross the road, just 200 yards eyes right, there it was.

We were first in at 1230. I ordered a steak and ale pie and chips. Reggie had to make do with the bag of treats I had with me.

I also had a pint of The Rev James Rye,  whilst I waited for my pie to be cooked. This beer is brewed by Welsh brewery SA Brains.  http://www.sabrain.com/beers/draught/the-rev-james/the-rev-james-rye 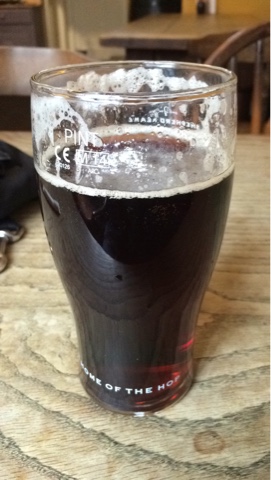 As usual I had a fixed lead for Reggie. He is always well behaved and can be tied to the table.

When the pie arrived it was superb. Lumps of steak in an ale gravy and light pastry.

The pub filled up but strangely I had half to myself with Reggie and They all crammed into the other half!

Time past quickly and we left about 1345 to walk back to meet Claire and Sally. We walked along the city wall and back in time to get in the car about the time the parking ticket ran out.

It was freezing in the wind and we had ten minutes with the heater on before they arrived.

In the 21st century when we take mobile communications seriously neither O2 nor 3-Mobile could provide a consistent signal so we could keep in touch!

Thanks to Patrick at work we now have a working laptop with Windows 10 installed.

After the problems when Windows Update decided to do the usual security fixes for Windows and Office, and lobbed in the Windows 10 upgrade at the same time, it is good to have it back.

Mind you. The original upgrade failed on October 26th and it took until November 16th to get it fixed.  Days in my life that I will never get back thanks to Microsoft and their half arsed upgrades.

On top of that there is the MS tech forum that suggests all sort of fixes and bodges that are way way outside the technical know-how of the average home user.

Patrick though is a technician and network manager at work and even he struggled to fix it. In the end we had to backup what we could of the user data and then blast it, installing Windows 10 from scratch,

I am lucky he saw it as a challenge as I gather from the internet and forums that others, and many of them, have had to pay a lot of money for a professional to fix their shattered machines. Don't expect Microsoft to help though.

The other stroke of luck was that the challenge only cost me a bottle of Bushmill's Irish Whisky. Lucky indeed. 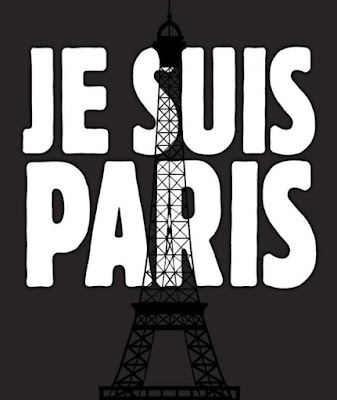 To save double posting.....

Email ThisBlogThis!Share to TwitterShare to FacebookShare to Pinterest
Labels: Ring of red

It's that time of year. Poppies have been on sale for a few weeks already and the Remembrance will take place on Sunday 8th November at 11am in Whitehall and all over the Commonwealth.

Why we don't stick to the proper day and have it on the 11th November, I do not know.  I suppose a Sunday means that Big Business doesn't have to miss a day's trading!

The Ring of Red is now in its third year.  Originally the target was to ring London on the M25 orbital motorway with bikes and their riders all wearing red to form a moving "poppy".  There is another on the M60 that rings Manchester.

Hopefully, the weather will be kind and thousands of bikes get out on the M25 at 1330 to complete the ring.

I had the event in the Meldrews diary but it wasn't met with too much enthusiasm so I took it out.  In the diary I am tied to a meet whether I am Johnny No-Mates or not.  Been there, done that and have many t-shirts to prove it.

This year I will cross the Thames at Dartford and meet the group from all over the country that have chosen to meet and leave from Meeting Point 1.

I'll post it again as an impromptu meeting rather than a definite.
By InvictaMoto - November 02, 2015 No comments: