95th Anniversary of the Battle of the Somme

On the way back from work I saw the odometer was getting close to 74000 miles. I worked out that the it would flip up in the middle of the motorway stretch between Maidstone and Ashford.  As if by coincidence, as I approached the turn off for Leeds Castle the motorway came to a grinding halt.  Usually something that happens only on a summer Friday as everyone flees to the coast for the weekend or is going to the ports to escape to France on holiday.
I took the slip road and as I approached and headed down the A20 instead. Luckily, the road was pretty clear so I guess the hold up was rather fresh.
The 74000 clicked up and I made a quick dask to the left to where the Pilgrim's Way works its way along the edge of the hillside.  I saw a programme once where TV personality Nick Knowles (before the DIY programmes) did rides in the country on motorcycles with a selection of celebs. I am sure he did the Pilgrim's Way.  I assume it is a different bit, as this section is very anti-motor vehicle and walker and mountain bike friendly. Such as shame as mountain bikes are the cause of much damage to footpaths across the country as they have little or no idea of the damage their tyres cause to the paths they ride on.
I took a picture of one end of the section. Another superb ride to Cambridge with friends from the Kent Centre and my brother Neill. 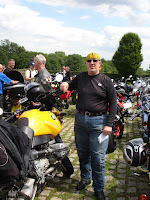 Once again the weather was kind and the Royal British Legion have raised loads of funds to assist with the work they do with ex-servicemen, both abled bodied and those carrying injuries or disabilities from their service.

Me at Cambridge United States Memorial Cemetery at Madingley, wearing my Suzuki Owners Club Buff to keep the sun off my head.
By InvictaMoto - July 02, 2011 No comments: