It's 12 years since I did my first charity 'tache growing and that was with Tacheback. In fact I did Tacheback twice before it disappeared and was re-invented as Movember a number of years ago.

This year, so far, fund raising has been disappointing. That's the polite way of putting it.  All I asked was for my FB friends to donate one pound or whatever local currency they have. International charities like Movember can cope with different currencies, be they dollars or euro and a myriad of others.

I can't say it is hard work growing a moustache. After all, once your balls drop, hair tends to grow all over the place, the top lip being just one place.

There are only two days left in this Movember and the mo will be revealed late on the 30th.  Please sponsor me,  if only a quid or a buck. They all count.
By InvictaMoto - November 28, 2016 No comments: Links to this post

Looking through my blog to see if there any embarrassing rants that need removing I came across this thread from just over two years ago.

I am still wearing this jacket most of the time. It is still waterproof. Over the years the colour has faded from black to a peculiar browny red tinge, but not all over.

Bike trousers that is.

With the weather turning cold I decided to spend some money on another pair of padded textile trousers. The last pair did okay for a cheap pair, but eventually (and embarrassingly) split around the crotch. I suppose I was trying to pack more in than they were designed for. Like and over stuffed sausage, something had to give.

The problem with being rather portly is that the trendy makes think that an XXL waist is 36"!  These companies, you all know who they are, cater for five foot tall Latin MotoGP riders in the main. Not that one of them will ever wear a pair of Cordura lined for all weather trousers.....

So after trawling about on Black Friday, something else we have accepted from our US cousins, I found one of the large online bike shops, Ghostbikes, selling larger sizes.  I entered the discount code and was pleasantly surprised to get a good few pounds off and free delivery.  Next day.  And next day it was.

The reviews are good from customers and all recommend a size or even two above normal jean sizes.  As they are lined I don't wear normal jeans under them, and for the waterproofness I take the liner out in warmer weather anyway and that makes them more comfortable.

First impressions are good. I tried them on on arrival and the leg length seems okay but the liner doesn't seem to fix at the ankle and so when they come off, the liner comes out too.  I'll have to investigate.

Here's a link to the makers own webpage. http://www.armr-moto.com/product/hara-2/

Their first "action" will be the annual trip to Ostend on Saturday for the St Nicks Rally.  In previous years I have Jean Sans-Amis and last year fellow Meldrew Cal came and we had a good if not cold day out.  At the moment I am JS-A again.

After watching the Cenotaph Remembrance service I got toggled up and left about 1145. The idea was to meet other Meldrews at one of the service stations on the A2 but as plans go it was rather rubbish as none of them came, deciding to have breakfast elsewhere.

In the end I made the pitstop at Cobham Services and by accident I put super unleaded in the tank. Some goon had switched the nozzles over into the wrong holsters. And I didn't read the pump handle.so ended up paying 130.9 a litre instead of 116.9!!!

This year mine was the only bike there on the day  I caught up with another one on the A2 as we approached the M25 and then saw a few more as we entered the service area, which was packed with bikes.

A large part of the car park was roped of for us and it was already pretty full when I arrived about 1310.

I hardly had any time to snap a few photos before we all mounted up and headed for the M25.

The ride itself went off pretty well. I only went as far as Clacket Lane and went past this time turning back at the next interchange.

The idea was that we should get onto the M25 and ride in single staggered file about 4 bike lengths apart. Reality was that loads of bikes were bunched up in large groups and then massive gaps...

Arriving home just before 3pm in time for late lunch and dog walkies.

In the end  we didn't complete the ring around London. Maybe because of the bunching and stupid gaps. 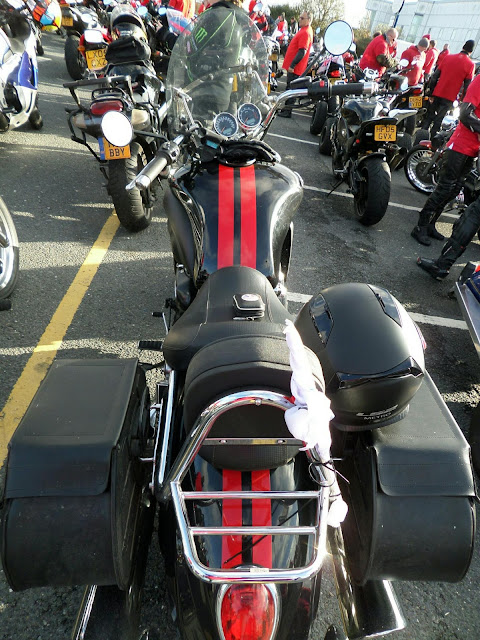