The day started earlier for me that when I go to work. So much for a day off!  The alarm went off at 0630 and I was out and on the road at about 0720.
The weather we have been experiencing over the last few weeks had to come to an end with a bit of a bang, in fact with thunder and lightning.  Over the weekend there had been a slight improvement, and Monday wasn't too bad.  At least I was able to wear my Joe Rocket mesh jacket.
Tuesday though. It was overcast and the forecast (for all that is actually worth) has the day as showers with some sunny intervals.  As a result I opted to wear the old but still fully waterproof Frank Thomas jacket.  And a good job I did.
Unlike a lot of more recent waterproof where the waterproof lining is removable called a drop liner, the old FT has it glued to the outer fabric.  I prefer this but like all of this style of jacket, the outer fills with water and although dry inside, it starts to get heavier and heavier.
The ride across to Knowlton was in light sunshine, not too hot but the skies looks ominous towards the north and west.
It stayed dry for the ceremony by the "Bravest Village in the UK" cross, the main Thankful Village riders, Medwyn and Dougie, made their speeches and the local newspapers and TV were there.  Although I didn't know it until I saw a mention on the Kent Centre FB page and then on the local news, I was on the piece!  At least I didn't scratch myself or do anything embarrassing! I have recorded the news item and it is on You Tube.  I'll post the link at the bottom!
There were only two of us in jeans as everyone else had leathers or textile pants on. So as we made a fuel stop only about 15 miles into the leg of the journey to London, we donned waterproofs.
Three of us that joined the run at Knowlton were told by Dougie that we had also been invited to attend the special event that lunchtime at Horse Guards Parade.  This is the HQ of the British Army. Security at all sites is enhanced with the threat of terrorism and the events that took place in Woolwich earlier in the month.
The rain started as we left the coffee/fuel stop and we were soon separated in the heavy traffic on the M2. I ended up at the front with Steve on a Thunderbird behind me. We slogged through torrential rain at quite low speed expecting the main bikes to overtake us.
My gloves soon became sodden and the heated grips worked to keep the palms dry but not enough to stop the black dye staining my hands! By the tea bar at Blackheath they still hadn't come past so we pulled in to wait and a couple of minutes later they came past.
The first London stop was the Imperial War Museum where the main bikes were allowed in through the gates and posed for photographs with the Mayor of Greenwich in front of the massive turret and 16" guns that are sited at the front. The museum is housed in the building that was once the Bedlam mental institution.  In England when something is like bedlam, it is a mess and like a madhouse!
It was still teeming with rain as we took a few photos and then we were off for Horse Guards and the photo session at the Cenotaph in Whitehall and then the reception in the Wellington Rooms, so called as the Duke of Wellington commanded the army from this building during the Napoleonic Wars and afterwards.
Also taking part were Lord Digby-Jones, the Chairman of Triumph Motorcycles, and the Chairman of the Royal British Legion.
With photos taken it was off to the Wellington Rooms and sandwiches. With only a piece of toast at 0900 in my belly, but 1330 I was a little peckish.
We posed for more photographs on the Horse Guards Parade itself before the main party headed off for the next port of call at the Ace Café and I broke off to ride back to Kent, eventually fighting through the crowds and traffic in mostly heavy rain to arrive home just before 1700.
I had a great day and it was an honour to be invited to the Cenotaph with the guys and also to be involved in such a worthwhile charitable ride.
Photos to follow!!!

I had 32 miles today today and the dealers is about 10 miles away, so I embarked on ride the opposite direction (twice) and turned around eventually arriving with 506 on the odometer. 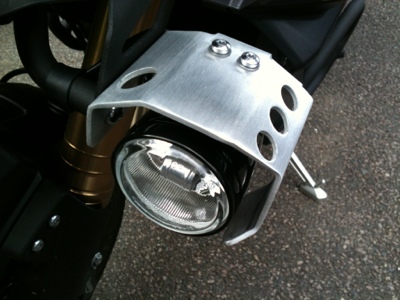 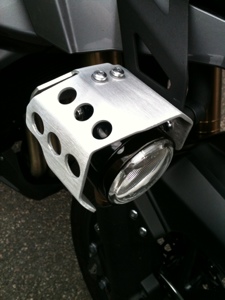 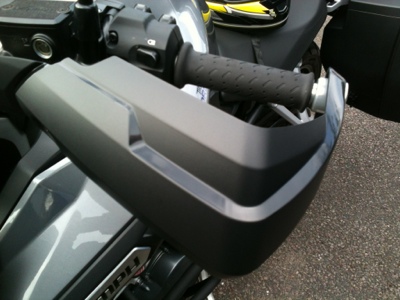 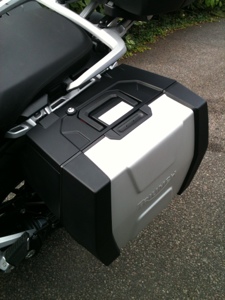 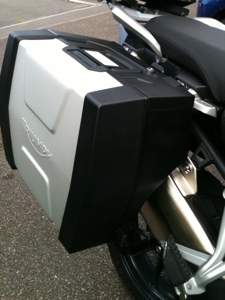 The panniers and hand guards had arrived along with the spot lamps and these have now been fitted.
As the is quite steep and the rider sits do close I invested in an expensive piece of Triumph rubber that should stop the front of my jacket from ruining the paintwork. 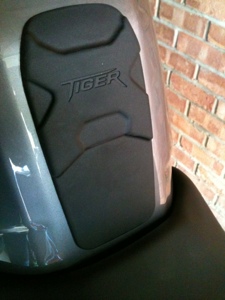 So there we go. Next service is due at 10000 miles.
Tomorrow up bright and early to join the Thankful Villages Run!!
By InvictaMoto - July 29, 2013 1 comment: Links to this post