The list of checkpoints and entry card have arrived. I'm entry number 68.
We have chosen the north Wales route so we can have another go across to Anglesey and Llanfair-PG. Now it's time to look at the checkpoints and plot a route that will allow us to go for the Platinum Award along with the Dragon Award.
Only three days to go.
By InvictaMoto - April 19, 2011 No comments: Links to this post 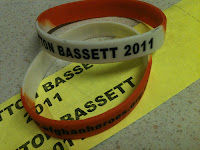 The numbers had dropped considerably since last year with just three of us on the run from the Kent Centre and Graham Reynolds already there as a marshal. In the end Ian had to drop out so it was just my brother and me at the Oakdene with about 25 KAMG members on a run to Shoreham.
“Where you off to?” asked one. “Wootton Bassett” says I. “What’s there?” he replies.. I explain and still he has no idea what we are doing.
Our run along the M26/M25/M3 to the pit stop at Sainsbury’s in Bracknell goes off well and we make good time. The M4 is relatively calm with the occasional car driving nutter right up your arse when in the fast lane at more than the legal limit. But what the heck, we are above these idiots.
On arrive at Hullavington the first person we spot waving his arms like a windmill is Graham. I stop to have a word and a pat on the back.
Then we show our bike passes and join the runway wide group. We are about halfway along as we come to a stop and it’s 1105. This year is better organised as the bikes are in blocks of around a 1000 bikes with a big gap. As the riders depart on their run, the blocks edge forward about 150 yards.
At 1315 we are off. Not quite the 1100-1200 slot but they had had some incidents (their words) on earlier runs.
Our run went off without incident. I managed to get stuck behind some bloke with a Czech SOC hi-viz and a Triumph Tiger. Try as I might I couldn’t get alongside to see who it was but the occasional glimpse in his right mirror looked like Les Bensley’s moustache! Somewhere in my SOC archive (actually a box in the garage!) I have the original artwork for that style of logo!!
The rest of the ride was pretty uneventful. A trio of fat blokes on Triumph Rocket-Threes seemed to have problems with balance and/or clutch control and we had to slip past as their barges blocked the road on any one degree incline.
The ride through WB was very poignant and even had an old git like me with a tear. The people thanking us for our being there. Being thanked by someone wearing a t-shirt showing the face and name of a relative killed in action in Iraq or Afghanistan seems the wrong way round somehow.
Once clear of the hand slapping and waving we joined the M4 eastwards for the sprint to Membury to make a lunch and loo stop. Here were reunited with one of the Triumph barges making a turn that would put an oil tanker to shame!
From then on we went with the flow to top up again in Bracknell for the last bit of the way home.
I arrived home in time to watch WSB race two from Donington and eat the pork pie that had escaped at Membury.
A superb day and a chance for us to give something back.
See some of the pix from the day on the Flickr group I set up last night.
http://www.flickr.com/groups/woottonbassett2011/
And not only that, my picture (above!!!)_ taken on 17th March when the wristbands and bike tags arrived has been purloined into another Blogspot Blog.  Might have been nice to get a credit.
By InvictaMoto - April 04, 2011 No comments: Links to this post

With the problems of last year when I lost most of the riding year, it was a bit of a shock to see from last year's MoT to this years I managed less than 4000 miles. I've not worked it out exactly, but it is not far above 3900! Possibly my worst year for donkey's years.
By InvictaMoto - April 02, 2011 No comments: Links to this post

This time tomorrow and it will probably be all done and dusted. Hopefully the idea of pre-registering and a set maximum number will result in a smooth day. Of course it all depends on people sticking to the slot they chose when they booked. Let's also hope the marshalling is better too and that everyone isn't stuck on the runway for hours like last year. Fingers crossed for a good day out. In the end it is about showing our respect.
By InvictaMoto - April 02, 2011 No comments: Links to this post