It's two years since my brother Neill and I had the whistle stop trip to Scotland to take our Mum's ashes to their final resting place near Aviemore.

It's even longer since the bike club's "indoor camping weekends" came to a halt. Every year for four or five I organised a trip up to Scotland for the SOC and we stayed in youth hostels and student rooms where colleges were closed for the summer.

So this year we are going back, but in the car. Claire will be the co-pilot and back seat driver will be Reggie.

The plan is to get away after work and get part way on the road, at least get around London so we can have a clearer run on the Friday morning.

I have planned a second stop near Carlisle. Hopefully the route will take us near some part of Hadrian's Wall as we cut across from the east coast and the A1 to the M6/A6.

And then into Scotland near Gretna. We have two overnights in Glencoe and three near Loch Ness before we start to turn South and homeward bound again.
By InvictaMoto - July 26, 2015 2 comments: Links to this post

Today was billed as sunny and once the dog walking and lunch had been taken, I could get out on R3, I decided to have a ride to Dungeness and the Railway Cafe to have a cup of tea and at the same time test the camera.

Lining it up with the app on the iPhone was child's play.  Rather than start at home I stopped on the back road on the marsh and did a short ride before stopping it. The iPhone app won't stream from the camera but you can download, With limited space on the phone this is not an option.

I had to wait to get home and get them on the laptop and then have a look. Two of the four look all right but two seems to have been taken through a steamed-up lens or "soft focus".  The camera looked okay when I checked it out.

Originally I had planned this as a bike raid across the Channel to visit the cemetery where a guy that is probably my grand-uncle is buried. Or great great-uncle.

Charles was killed a hundred years ago on the 13th September.

We have been before but this time we are going as a family. Claire, Reggie and me.

Now we are going for a weekend as Reggie needs his own passport that will show his vaccinations are up to date, that his rabies jab has been given and that he has been wormed.

Apparently there are some nasty tapeworms in Europe that we don't have here in the UK. So the process means they are killed before they get can get a toehold in UK.

The system means he needs to be wormed up to 120 hours before return and would mean visiting a vet in Europe to get the worm treatment. As we are away for a weekend it all gets done this end.

I have booked hotels for Friday evening and Saturday evening that are dog-friendly.

The first is from the Campanile chain of motels,  and we have stayed in many over the years, in Calais. It is very cheap at £29 for the night. But really we are just there to sleep to give us a good start on Day 2. The restaurant closes at 10pm and so we have to be able to get there in time to get there. Sadly, Reggie isn't allowed in the restaurant.   In the past we have stayed in a variety of hotels in France and there have been dogs, including Campaniles.

Night 2 is in Armentières and local enough to visit Charles.

The action camera market is massive and I have come late to it.

Not wanting to spend too much on a camera in case it proved to be a fad, I bought this Denver AC5000W.

It comes with loads of accessories and a waterproof case. To that I have added a RAM ball with a standard camera screw mount. 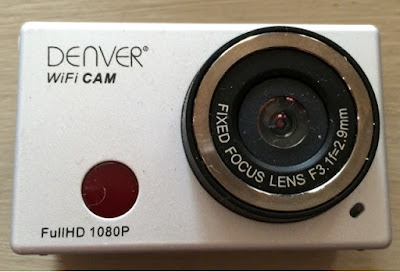 I've tested in the house. This model comes without a screen on the back but a wifi link to my iPhone and an app. The app allows full functions to line it up and start recording.