11 days and counting down

Only 11 days and a few hours to holiday time. Yippee.

Me, Claire and the GS taking a well earned break to Germany and Austria.

Plans are so far:

12th – Ride across Belgium and Germany to Mercure hotel near Bad Homburg.

13th – Southeast across Germany to Salzburg where we’ll stay two nights in the YH there.

18th – On the Road Again – Grossglockner and over night in Heiligenblut right at the top!

19th – Across the top of the Dolomites, 11 passes including the Stelvio ending in Sta Maria YH in Switzerland

20th – Short 160 mile or so run across Switzerland to Stein am Rhein and the YH there, and a chance to check out the scenery on the way and also the Rheinfalls.

21st – Back on the road and a reasonable day in the saddle through Germany to St Goar and another YH. Two nights eating bratwurst and drinking local wines!

23rd – Last day ride back to Dunkerque and the ferry home.

Email ThisBlogThis!Share to TwitterShare to FacebookShare to Pinterest
Labels: Holidays

Not so dramatic, after waxing lyrical for ages about my Joe Rocket (JR) jacket and the evangelical style of letting everyone I see know about it, Claire bought one. Not JR but a British made RST Vento Jacket. 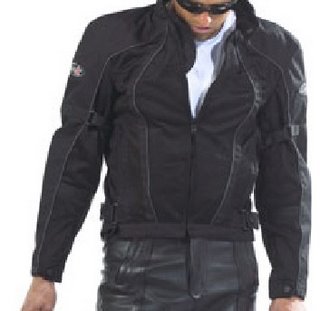 This jacket is made of slightly more cordura and less mesh than the JR and is fitted with full armour in shoulders, elbows and back using Knox armour.

For £70 it looks very good value for money. It's not waterproof (like the JR) but comes with a rather natty looking "vest" style sleeveless insert. We'll see how it performs on our holiday!

The pic is taken from a website. Despite showing it in a few different colour combinations, Powerhouse in Ashford only had it in black, and it does look good. Real biker colour!
By InvictaMoto - July 29, 2006 Links to this post

After a lot of messing about and phoning and emailing the IoM I managed to get two three day reservations on the Island.

The first was a recommendation from one of the places I phoned and is at Ballaugh. I took and address and sent a deposit to them ages ago. I should really check my cheque book as I've not had a receipt from the lady I spoke to, nor a reply to my letter asking for directions. The Cronk at Ballaugh seems too vague!

The second place is at Foxdale. They did send a receipt and a nice map.

Email ThisBlogThis!Share to TwitterShare to FacebookShare to Pinterest
Labels: TT 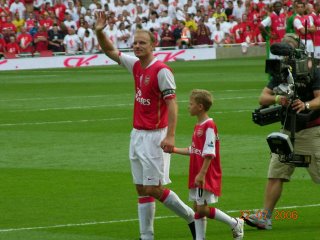 Thanks Den for all the good times at Arsenal.

The Somme - Ninety Years On

The Battle of the Somme began in the early hours of the 1st July 1916. "The Big Push" that would throw the German Army back towards Belgium from the line running across Picardy. The offensive started with a huge bombardment to drive the enemy back from his forward trenches and cut the miles and miles of barbed wire that lay across no mans land. A partly successful barrage left many of the brave men that climbed out of their trenches that morning with nowhere to go and they were mowed down before reaching their objective.

At that time, the reserve and the next group of troops to move towards the line were still arriving. They moved by night so that air recon couldn't pin them down. My Uncle William was 26. Although born and bred in South London he found himself a private in the 7th Battalion Kings Shropshire Light Infantry.

They arrived on the Ancre River near Corbié on the 12/13th July. On the 13th, they moved into the line and then were to assault Bazentin Ridge. Once again the wire wasn't touched. At 3.30am they rose with the front and communications trenches at Bazentin Ridge, some 1500 yards away as their primary objective. The Battalion strength was 33 officers and 905 men, at 600 yards the en-countered uncut wire and heavy machine gun fire. They made no progress.

At 1100 they tried again making the front enemy trench. The 6 officers and 135 men that remained held out until relieved on July 20th.

Sadly my Uncle wasn't one of them. He was wounded and taken to the Casualty Clearing Station at Corbié where he died on July 16th.

And that's where I come in. Claire, my wife, and me taking a day trip on July 16th 2006 to see the area and to put a small memento on the grave to show that although a small family, we remembered.

Instead of the car we took our BMW R1150GS as transport. The out run was by motorway to Amiens, purely to get there quickly. As it was the Sunday after Bastille Day, the villages were like ghost towns. The motorway traffic light except for enormous queues at the petrol stations. French fuel was over €1.40 a litre for Unleaded. And hardly a café or restaurant open!

On arrival the GPS took us right to the cemetery. 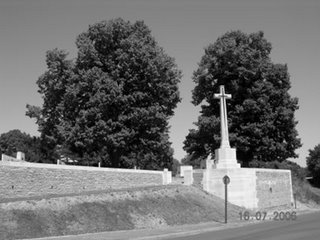 We laid a couple of crosses and some silk poppies and had a few minutes of reflection sat on the wall under the trees that were planted new as saplings when the cemetery was opened. I left an entry in the visitors’ book to say that we had been there. The book is new for 2006 and a few pages are filled with names from people from across the globe. 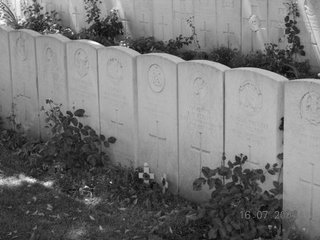 William's grave marked by the crosses we laid

After our reflections, we set off for town in search of something to eat, plans thwarted, as I was too eager to get there rather than eat on the way. “Desolé” became the all too frequent reply.

We then headed for Vaux and the monument to the Red Baron, or rather the place where he was shot down. And couldn’t find it. The temps now about 38C.

Aborting we headed for Albert. Albert the “star” of so many WW1 pictures; the church with the Madonna and child at right angles to the build-ing. Then we saw it. From 15 kilometres there was a glow in the sky, then, as we got nearer, the glow became more solid. It was of course the gilded roof of the tower of the church. A wonderful sight. 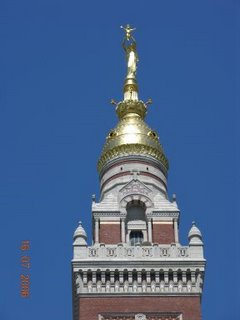 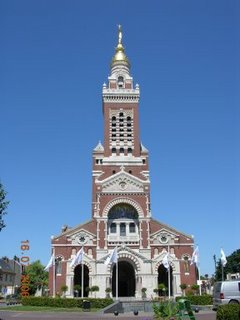 As we entered the town we saw a petrol station open and dived in. The time we were there quite a few bikes came to fill up, all kinds of race-reps, but no other BMW’s joined us. We bought water and some waffles in case food was not going to happen, and it didn’t. The two café/bars open had stopped serving. So we ate the waffles and stood to cool off in the shade. 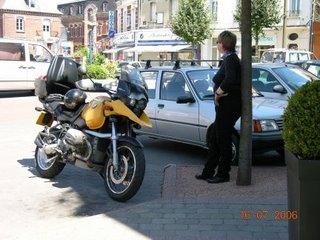 I programmed Doris to take us back via Arras and Arques as I wanted to scout out places to go on another trip we are planning. The cross-country run takes you along the D928, to the north of the big brick memorial at Thiepval. The cemeteries start to come thick and fast now, signposts overloaded with the green Commonwealth War Graves Commission signs…and along the road there are so many more to pass, some quite small, and some really too large for comfort.

Arras was skirted and then we worked our way to the N43 and turned northwards. We wasted a half hour in Arques trying to find the Ascenseur de Fontinelles. And then gave up riding around glass factories and indus-trial parks in the tremendous heat of the afternoon.

The last leg was through St Omer to Guines and into the Shuttle terminal a little early. The auto check in offered us a crossing immediately for no extra cost so we took it. Bad move. Due to a broken down train in the Tunnel we got away at about the same time we were ticketed for and we still had empty bellies!


Choosing the dates of the MiniTour® for July 1st was a slight miscalculation, or a lack of forethought – 90th Anniversary of the Battle of the Somme? But, in the end the ladies of the party didn’t want to do any “war” things on this trip and so we avoided the wars of the 20th Century. Instead of 20th century wars we opted for the earlier conflicts in the 14th and 15th centuries, namely Crécy and Agincourt.


Crécy was our Saturday stop en route for the hotel in Abbeville. The group consisted of 8 people on 4 bikes. Two of the riders had never ridden abroad despite years of riding experience and came equipped with a Pan European (Ian & Amanda) and a Blackbird (Simon & Debbie), with Claire and me on the GS. The fourth was Nigel with wife Jane on a Suzuki GSX600.


Doris (my Quest) ably navigating us across the forest at Crécy to the badly signposted battlefield. Talk of underwhelming. Okay, so the French lost but this is quite appalling. There’s a gravely car-park, some badly maintained toilets and a heavily graffiti encrusted tower to mark the spot where Edward III of England is supposed to have stood to conduct the English troops against the French cavalry. 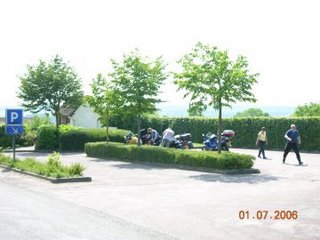 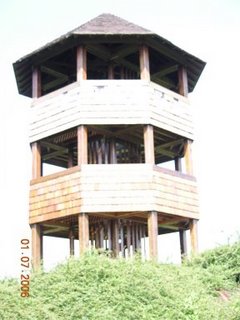 In the “Moulin” the panoramas showing where the armies were deployed has been the victim of one too many cigarette burns. Pathetic.


On the Sunday and after lunch and then an hour or so exploring the underground cité of Naours it was back on the bikes on the last leg of the journey to Azincourt. 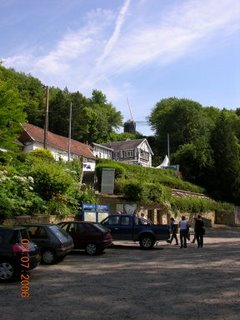 Naours
Doris faultlessly led us there and right to the visitor centre. 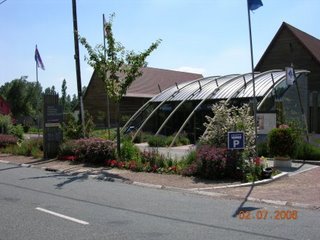 Azincourt Visitor Centre
Nothing could be in more contrast to Crécy. The roads are lined with cut-outs of knights and archers. A decent car park and an audiovisual display using TV-heads on models dressed a characters form the era. The hands on section in the mezzanine gives you the chance to see how hard it was to pull the string back on the bow and launch an arrow but 10 a minute must have needed super strength. “Well worth a visit” and only €6.50 to get in.


In the end a nice weekend with good company.


Competition time: No prizes on offer but can you guess what Nigel ordered for his lunch? Yep that's it, with a piece of lettuce known in the catering industry as "garnish". There were chips/fries/frites as well..... 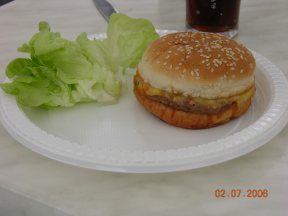 Over the years I have owned a few different style bikes from the GT750 that I still own, to grand tourers like the Cavalcade to bikes with off road pretensions and many roadsters in between.

My current bike is a BMW R1150GS. I’ve had it for three and a half years and of all the bikes (with the exception of the Cavalcade and Katana 1000) it’s the one I really don’t want to sell… if only they still made them. 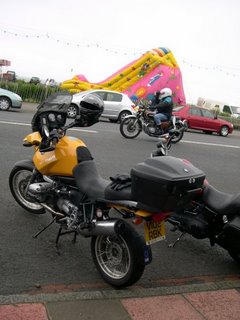 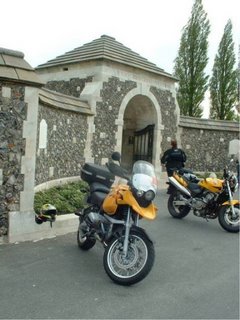 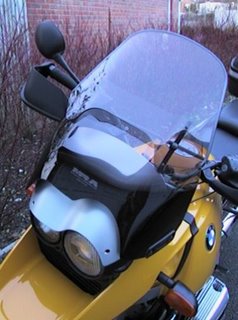