Fitted earlier today at FWR Tyres in Kennington at about 5pm. 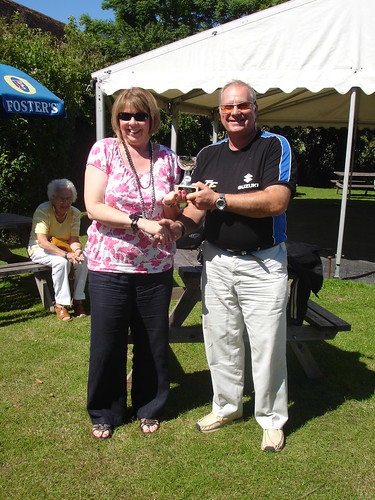 Claire picking up the Pillion Award in the Kent Centre Mileage Trophy. 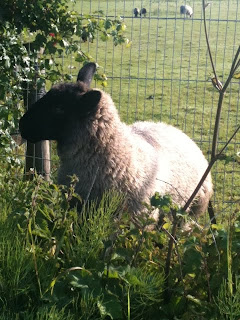 There's nothing like an aerobic warm up in the morning.

Attempting to get Shawnetta here back in her field by Westenhanger defeated me after ten minutes of waving my arms and jumping up and down like a pillock. At least it got the blood pumping and well as boiling with anger!

Where's the ginger bloke off Countryfile when you need him?

Farmers moan about the public, but how about having signs with a contact number on your field gates? I had to leave her frightened and in the road to get my train as I couldn't miss it ans wait another half an hour for the next one.
By InvictaMoto - June 24, 2011 No comments: 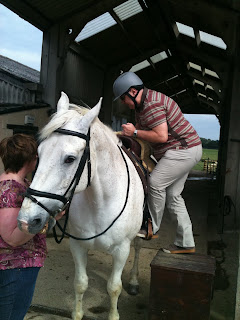 Only a couple of weeks away from the 2011 'Allied Memorial Remembrance Ride' from Cambridge Services on the A14.
This area used to be awash with US Air Force bases and it is to the memorial and cemetery for the airmen that we ride.
Last year our local SOC group had a good turnout, this year, only two of us.  Disappointing.
http://www.alliedride.org/
By InvictaMoto - June 17, 2011 No comments: Links to this post

Email ThisBlogThis!Share to TwitterShare to FacebookShare to Pinterest
Labels: AMRR 2011

I suppose as we didn't go that it should have a different title.


With only the headliners on my radar we decided to come home as a drive home at 10pm would be far too late.


After breakfast we set off. The Hogs Head is really worth the stay. The staff are very friendly and the puppy that greats you really cute. With various special offers they offer at weekends we had to pay £25 B&B. I'll do a write up for Tripadvisor soon.


The journey took 5 hours including a coffee break at Toddington and a quick shop in Sainsbury's.


Rain all the way from Nottinghamshire to Kent and even the roadworks weren't to bad. Only the five mile tailback to pay the pirates at the Dartford Crossing caused any hassle. Half an hour of crawling was almost enough to make my blood begin to boil. No tolls no hold ups.

Day 2 and up early for breakfast so that we could be out nice and early.

In the end we had the full English to set us up for the day. First stop B&Q to buy some camping chairs! There are hundreds on the hillside overlooking each stage.

Once bought we dropped in at Decathlon and had a browse about abs Claire bought a new fleece. Then into Trowell services for a Costa and to buy lunch at M&S! Salad and some mini shortbreads.

Then on to Donington. Light traffic and an enlightened parking person that pointed us to a tarmac parking area nearer the entrance.

Once in we set up camp slightly to the left if the stage in front of one of the screens.
Today's bands were:

I liked all of them but Claire less enthusiastic about R2R and DD.

Tomorrow we gave decided less of them in the day interest us so we'll drive home. 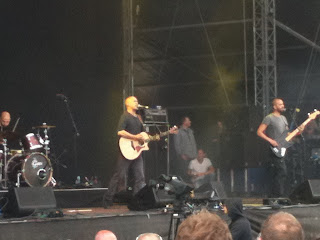 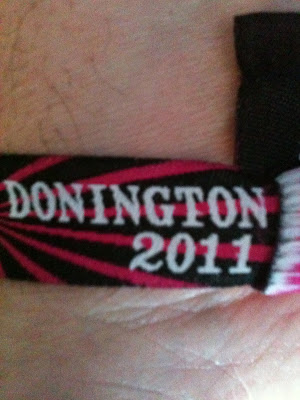 Download wristband. Entry to all areas as a VIP.
By InvictaMoto - June 11, 2011 No comments:

The forecast is good. Not especially warm at 12 degrees average but no rain. We'll see. Froze last night. God knows how the skimpy dressed yoof made it through the night.
By InvictaMoto - June 11, 2011 No comments:

Where to start? In the end set a leaving time of 10am as we couldn't book into the B&B until 2pm. That had to be done before going to the festival site.

Roadworks? Had I realised there would be so many I would have taken odometer readings! Firstly traffic queued into Dartford tunnels. No reason given but later Radio 2 Said one tunnel had been closed. Then roadworks from practically the tunnel mouth to the the A127. More at the A1 all the way to the M1, then M1 from J9 to J13...

Britain is up to its neck in debt so why waste money on road building? Job creation? Or wealth creation for the knobs that own the construction companies and their shareholders?

Then the M1 was closed south from J21 to J20 due to a major accident. Cue five mile tailback northbound so we could rubberneck. When say we I don't mean me as I deliberate don't look.

Finally arrived at Hogs Head in Awsworth about 1530!!! Booked in and straight out to Donington.

No problems getting in but so late managed to get to see Thin Lizzy, Alter Bridge, The Darkness and Def Leppard.

Mixture of showers and occasional brighter spells in the gloom but great so far.

At least not the oldest on site!

Back tomorrow after breakfast!
By InvictaMoto - June 10, 2011 No comments: 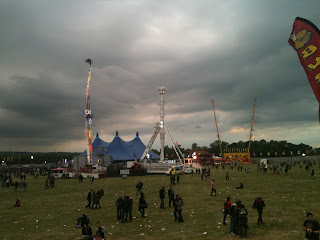 In between bands you can enjoy all the fun of the fair.
By InvictaMoto - June 10, 2011 No comments:

Just downloaded the Download app so we can see who is on and when. Going through I recognised more bands!


Neighbour ready to feed the cat so need to chuck some stuff in a bag, take waterproofs and warm gear as well.

Rather than be a mere spectator, watching life pass me by through the window of a train I decided to ride-in today. I was hoping it wouldn't rain, and as luck would have it, the rain held off until I arrived at work. When I say I usually use the train, other riders/bikers guffaw at my lack of "real bikerness".  To be honest, I've been there and done it.  Also, most of them don't have 160 mile round trip every day. I do.
First stop was Stop 24 to fill the tank with unleaded.  After a few years or decades of using my Shell card I had finally got lucky with a £3.50 voucher off the fuel!  Not to be sneezed at and as Stop 24 are the cheapest station in the area, a bit of a bonus.
When I set off from home the GS's fuel gauge was showing 5 bars lit.  After 3 miles as I peeled into the station there were 3 bars!  How does that work then?  In the end I squeezed 14.19 litres in the tank and dribbled in to make sure it was filled to the top. After 156.2 miles that gave me an MPG of 49.97.  Not bad for "making progress" in both directions.
After that it went a bit downhill. Firstly dire warnings of the M20 being closed or heavily reduced were a little over exaggerated as there is a single lane closed after the Maidstone Services junction for work on the bridge over the old LST (low speed train) tracks.  So far so good.  The usual muppets joining at the A249 who seem to think that the slip road directs them into the second of the four lanes and not the first.  Today's w-anker was a BMW 4WD with a woman on her phone, straight out into the third lane, she swerved back when she noticed the Pole in the 40-tonner who was already in that lane.
Then we picked up signs saying the A2 was closed west of the M25. Then these tempered down to extreme delays.  Once on the M25, I decided to take the Dartford Tunnel and then the A13.  The tunnel approach was easy enough and the left lanes are easier as the trucks wheeze about to get to the barrier.
Once on the A13 it was the usual Essex morning.  Halfwits in dumper trucks returning to the building sites in London after tipping the refuse and building spoils in Essex and the bottle blondes in 4WD's. Riding defensively is an art and gives time to watch the tailgating performed by the aforementioned halfwits without any danger. Anyone know the stopping distance from 50mph of a W-regd skip truck with full skip? I bet it's longer than that of the Golf or other car in front.
Finally to the bikes in bus lane section from the Blackwall Tunnel to Aldgate.  A wary eye on the dick that turns across your line and then safely to Shoreditch.  Here you need to avoid the yuppie and yuppette dashing in front of you with their little cardboard cup from some coffee shop.  Today I almost collected a small oriental girl onto the beak as she stepped off the traffic island directly in front of me. What makes it all the more remarkable is that she made eye contact with me for about 10 yards before she went! The ABS works and makes the same sort of clicking as it does when it sets itself on take-off in the morning. Phew.
Once at work, I had time to park and let the bike cool down and recover before we do it all in reverse on the way home in about 3 hours time!
By InvictaMoto - June 09, 2011 No comments: Links to this post

Email ThisBlogThis!Share to TwitterShare to FacebookShare to Pinterest
Labels: "Ride to Work", islington 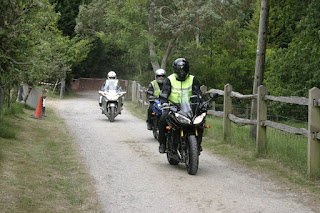 The Suzuki Owners Club and Kent Riders arrive at the Last Chance Animal Rescue Fun Day on May 22nd for the Kent Pet Food Run.

After twenty years of organising pet runs in Bedfordshire and Kent this was my last.

Luckily, it turned out to be a success.  Thanks to everyone that came.

Sadly, the 300D went to sleep just as they arrived and I missed off Tony Young who was the leader!!! 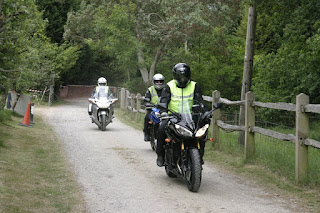 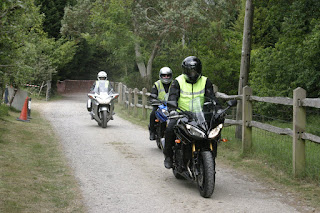 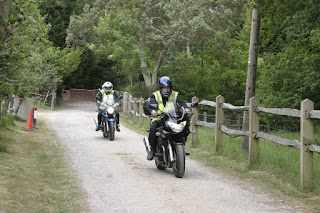 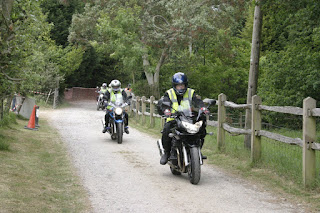 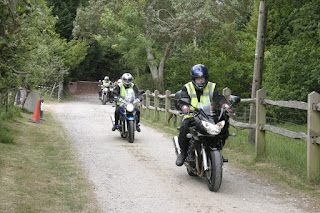 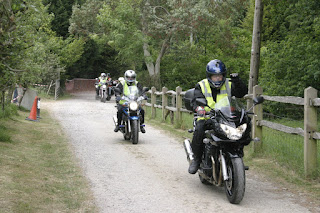 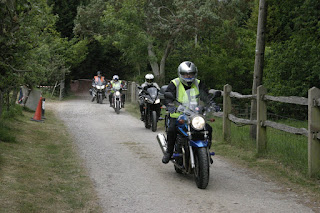 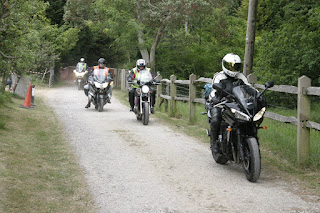 One day down. Three to go then it's DOWNLOAD!!

One day on the high speed train after this trip, then two days on the bike and then we're off.


So I know Def Leppard and Alice Cooper! Heard of others inc Rob Zombie.... 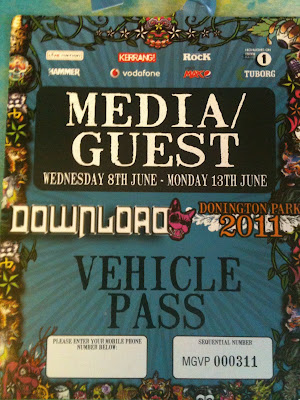 Only 4 days to go and the stuff has arrived. Two wristbands each and a car park ticket to hang from the car mirror.
By InvictaMoto - June 06, 2011 No comments: 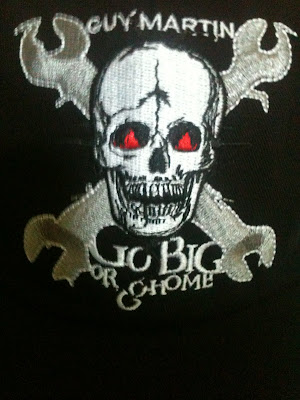 One of my favourite photos of any subject I have taken recently.

This one was taken with my old Coolpix 8700 that I dug out of the cupboard and partly charged the battery.

It was evening but I was amazed at the lighting on the subjects. This pic has not been tweaked or otherwise buggered about with using any photo hacking software!!!