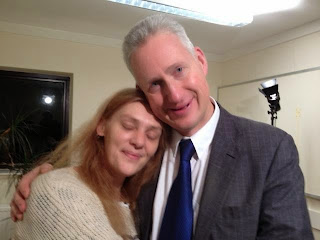 MAG has been asked by Bev Taylor to share the enclosed photo. If you can't see it, click on the link here: https://www.dropbox.com/s/s807qdtg3jovfqu/Bev_Tayor_Lembit_Opik_CPS_meeting.jpg?dl=0

On Tuesday, MAG's Lembit Öpik, Director of Communications and Doug Smith, North Devon Rep, went to Exeter to support Bev in her meeting with the Crown Prosecution Service, regarding the death of her 19-year old son Greg who was killed by Niall Darvell while out on his bike with friends. The photo was taken at the BBC studios after the meeting where this report was recorded: http://www.bbc.co.uk/iplayer/episode/b04pv3w0/spotlight-26112014

Darvell was driving a VW Golf which was not roadworthy. Darvell himself walked away without any custodial sentence despite having a history of drug and driving offences and not being insured; as well as driving away from the scene at speed – attempting to remove any evidence from his vehicle.

The CPS does not have a proper answer to what went wrong in this case, including Darvell's arrest by the police, and its handling of the family. The investigating officer didn't even mention in his report that Darvell left the scene, which is an instant 6-month jail sentence.

MAG is looking to take this case higher. Bev Taylor's MP Mel Stride has offered to help. It will take time and a lot of work to sort this case out. If anyone could offer any help in the research that will be needed, please get in touch.

This, and the case of Matthew Thompson are robust examples of what MAG is trying to change with its Justice campaign.

The Motorcycle Action Group Ltd (MAG) formed in 1973 is a civil rights organisation dedicated to influencing political decisions and social attitudes for the benefit of motorcycling and motorcyclists.

MAG is Registered in England as Company Number 8848806 and has its
Registered Office at Oakslade, Hatton, Warwickshire, CV35 7LH

Email ThisBlogThis!Share to TwitterShare to FacebookShare to Pinterest
Labels: Justice Campaign, kill a biker and walk away, MAG

Thank you for your submission for the Roll of Honour at the Tower of London.

As you may be aware, due to public demand we began filming the ceremonies on the 11th of August.  The archive site with the videos is now live and the video of 28th October Roll of Honour is now ready to view. You can watch the recordings at:  http://poppies.hrp.org.uk/roll-of-honour/28th-october/

Thank you for your support and your participation in this project to remember those lost in the First World War.

The Glorious Georges: Every generation has a story, step into the world of the Georgian kings at Hampton Court Palace, Kensington Palace and Kew Palace. Watch the film at www.hrp.org.uk/georges.

Into the final trot and then Movember 2014 will come to a bumpy end...

Thanks to everyone that has donated and I hope that as it is payday this week for most of the UK, it's a chance to donate. 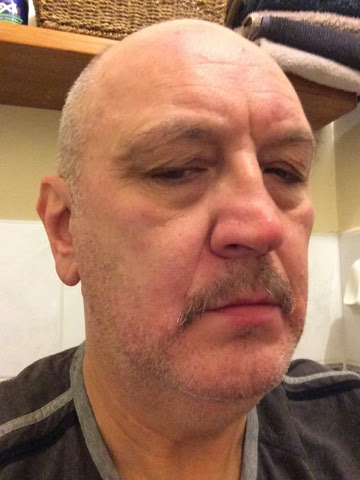 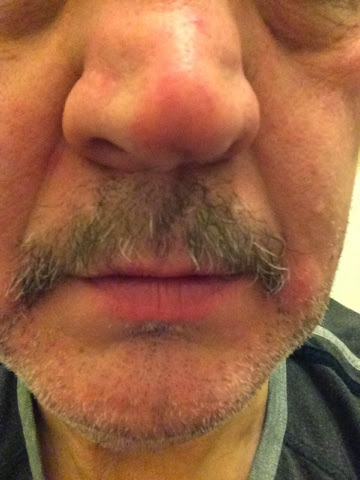 I suppose it is down to the previous owners but Reggie seems to have decided that sleeping on our bed is okay.

He's not stealthy at all, he just jumps up and commandeers a large space for himself.

It looks as though I am going to have to do some pretty drastic cutting and shaping to get the 'tache to look okay. I had been hoping for the Burt Reynolds or Sonny Bono look, but in the end it is a little too grey! 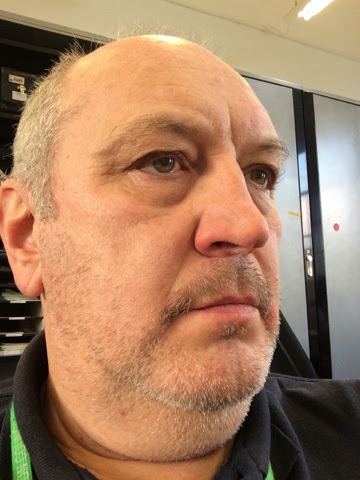 Looking back through the blog history to see when I first started this caper, and it looks like 2004, although the first blog entry is back in 2006 with Tacheback.

So, two thirds of the way through the month and I have raised less than ten years ago.  Not even keeping up with inflation.
Here's the link again in case someone wants to spend a dollar or a pound, a zloty or whatever.  Every penny counts.

I was reading a thread on the Facebook page of the Triumph Owners MCC about investing in a textile jacket and it made me think about how long I have been wearing my current jacket. I tried to cast my mind back then do a search, coming up with June 2008!

Was it really that long ago?  Amazing. Maybe I am also due for a new jacket?

The FT Aqua has been amazingly waterproof and continues to be so.  It was black when I bought it but in exposed areas like the sleeves and front it has faded to a more dark browny-red co;lour.  But in areas like under the arms and the back, it is still black!

I have no idea how many miles it has racked up. But I guess it is in the environs of 80000. In all weathers from very cold to high temps in Spain and of course, lots of rain.

Way past the half way mark now. The slide towards the end of the month is well and truly underway.

Drumming up donations is proving hard this year.

The BBC's Children in Need raised £32m from people in the UK and if just a fraction of that, maybe my friends and family contributions would have boosted my fund raising. 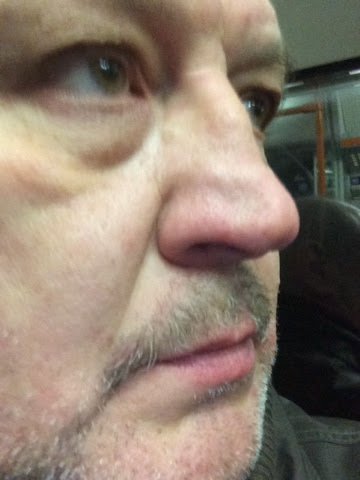 Email ThisBlogThis!Share to TwitterShare to FacebookShare to Pinterest
Labels: movember 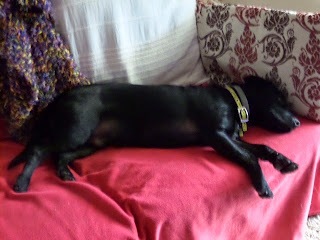 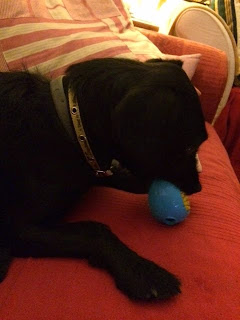 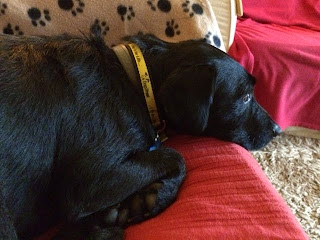 He has made himself at home in the house and is generally very good.

He spends a lot of time looking out of the window and chewing his toys. The tennis ball is punctured and he started to pull the hair off it.

Other than not liking visitors, and growling and barking at a gas service engineer he is okay.
By InvictaMoto - November 18, 2014 1 comment: Links to this post

Email ThisBlogThis!Share to TwitterShare to FacebookShare to Pinterest
Labels: the poppy 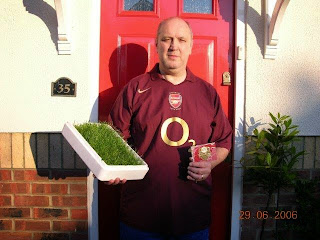 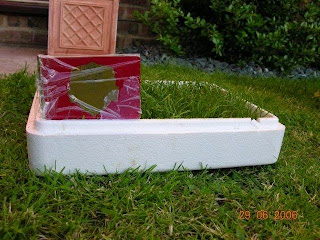 Way back in 2006, the Highbury pitch was dug up and the turf sold off. I was given this lump by one of my contacts at a school where I support their MIS. Sadly, it was quite sickly by the time I got it and it finally died a year or so after being planted.

I still have the flag though!

The latest addition to the Devall family

If all goes well Snoop will join the family from the Dog's Trust at Canterbury this weekend.

He is a rescue dog and admittedly he has a few problems that will need ironing out but he will present a challenge and a new companion.

The Dog's Trust originally had him on the website as a terrier-cross, but that was revised to Labrador-cross.  He does look like a Patterdale Terrier, although maybe not pure bred.

Snoop might get a new name as well; it's not as though he actually knows he is called Snoop.  I have always wanted a Reggie. 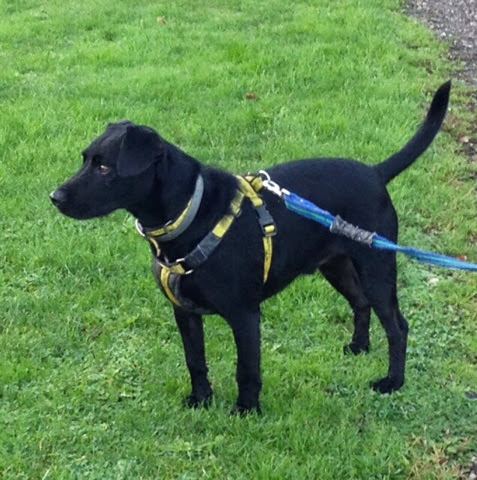 Snoop has been fully vetted, he has been neutered and chipped, and is medically clean; wormed and de-flead.

He is due to be collected on Saturday. Claire and I had an interesting walk around Pet World where we bought a few essentials for him; a bed, some toys and the essential poop-bags.....

Although we have both had dogs before, it is rather a long time since.  He is a little excitable and to be frank goes ape-shit if a dog gives him the "big I am", so he barks back and growls. Yet in his cell in the homing block he shared with a small Jack Russell bitch that bossed him. She chose the biggest bed and he slept wherever.

Today the Ring of Red.

I met my brother at the Esso on the A2 and we had a coffee before we set off for the A206 bridge just to the south of the Dartford Tolls.

Arriving there about 1pm to see no other bikes other than a couple that had joined us at Cobham Esso.

Once we saw the start of the column appear on the bridge I fired up the Xacti and managed to miss the first couple of riders!!

In the end I took about 5 minutes of HD video. There are some bits of empty road, but generally it works.

Email ThisBlogThis!Share to TwitterShare to FacebookShare to Pinterest
Labels: Ring of red

Friday was a very sad day for us. Our beloved cat Hilly passed away.

She was over twenty years old and had been on medication for an overactive thyroid for over eighteen months.

Sadly, a side effect of the drug is that kidneys are affected.

We took her to the vet as she was restless and spending a lot of time trying to go to the loo.

Despite their care she continued to deteriorate and we had to make the decision to allow the vet to put her to sleep. We couldn't let her suffer any more.

The house is very empty without her and we will miss her terribly. 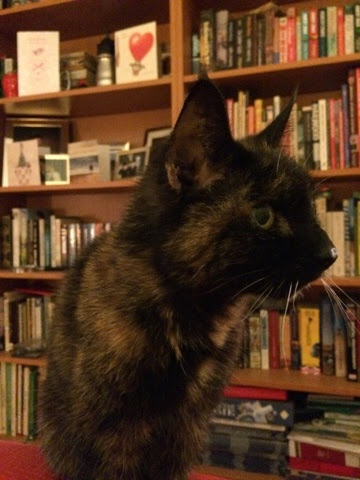