At last an EU body has taken some notice.

A victory for MAG in the UK.

Email ThisBlogThis!Share to TwitterShare to FacebookShare to Pinterest
Labels: EU

﻿﻿Some of the artwork inside the station at St Pancras.

The clouds overhang the Eurostar part of the station; this is in the original Victorian building.
﻿﻿
﻿ ﻿
The other is a statue of the poet John Betjeman, a champion of the railways and who wrote quite a lot of rail related poetry.

It had to be done. Too fat to get into my biking gear apart from my old Hood Jeans and my Frank Thomas jacket. Slimming World.
"Like a sack of potatoes" as my Gran used to say, and I wasn't even the portly geezer I am now!

Claire has been doing it for a while and so many of the evening meals were cooked with SW's focus in mind; cut out fat. But it is in the day that I can easily fail. The fatal £1.99 burger and fries vouchers for McDonalds's, trips to the café a couple of times a month for "All Day Breakfast No5" with toast and milky coffee, sandwiches from Harry's on Upper Street, plus the bags of crisps and chocolate that so very easily goes in the pie-hole. Oh, and not to mention the occasional visits to Manze's and Clark's pie and mash shops and Piebury Corner.

In comes the new regime.

In fact it isn't as odorous as I had imagined. It was hard at first. In our office there is always food. Like many places across the globe, office workers sit at their desks for their lunches. Employers are quick to pounce on the people that might slack a little during the day, but never seem to acknowledge the hours per week/month/year that are given freely by idiots, like me, that sit at their desk, laptop still logged in and answering the phone! Grrrr! Plus there are always cakes or biscuits being brought in or someone will come back from holiday and share a local delicacy. The last of these was something called Tobermory Tablet, a fudge like confection made simply from butter, milk and sugar and of course I mean lots of sugar!

In week one I lost 6lbs, week two 2.5lbs and week three only a single measly 1lb! Gutted! I was trying so hard.

I have never eaten so much fruit or so many fish sticks in my life and although I feel the craving for chocolate I have mostly managed to put it to one side and snack on another apple.

Last night I had a SW breakfast for my dinner. Bacon medallions (all fat removed), egg, baked beans, mushrooms and toast (Nimble brown) all fried in the one-cal spray stuff rather than oil or other fat! Very tasty.

I  skip breakfast. I commute either by train or bike for up to an hour and half each morning and can't get up any earlier, so now I have fruit, and it possible a free skinny latte from Waitrose.

So, weigh in tonight.

Fingers crossed that I have lost something again. With the cruise to Norway looming in less than two weeks it is going to be hard!

Actually fewer ducks. At the weekend the magpies managed to kill five of the original seven ducklings leaving just the two I managed to capture here.


Once they get a bit older they'll want to get out of the water more often and will have to be netted and taken away.
By InvictaMoto - May 29, 2013 No comments: Links to this post

Across the savannah of Lympne

Whilst on a cycle ride along the canal we had a little ride down by the Port Lympne animal park and we got lucky today, the giraffes we down by the southern boundary.


Can't be many areas with sheep, cattle and giraffes.

Further along the path back towards home Lympne Castle and below it the remains of the Roman town that was built around AD290. It's sometimes known at Stutfall Castle.


I took a picture of the information board that shows the layout of the area. 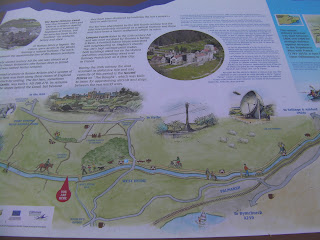 The Sanyo CG10 that I have been using is not a bad piece of kit and although it has a pistol grip it is still a little strange to get used to.

Here's a video I took of the giraffes:

Called by the Dark Side

I wasn't going to go and then decided as we were going out in the car maybe I could drop in and have a look at the Ducati Road Show at Laguna Performance in Ashford.
As we arrived one of the rides set off leavng two Diavel Stradas behind. I had a sit on one and Claire hopped on the back.

Mother Nature can be cruel sometimes.  Five of the seven ducklings have been killed by magpies.  The mother and the remaining two are being looked after.
By InvictaMoto - May 25, 2013 No comments: Links to this post

Not long now - http://devallcruising.blogspot.co.uk/
By InvictaMoto - May 24, 2013 No comments: Links to this post

Not a case of minding your head but the feathered sort!

This little family of mallards have taken up residence in the brick fishpond in the garden of where I work.

It's not that it is that close to a river or lake and the Regents Canal is maybe a mile away.

The female and her consort were visitors earlier in the year and we suppose they were checking out the neighbourhood.


The water is about two feet deep and the brick sides are sheer and a good eighteen inches above the high water level. So they should be safe from rats and foxes. Only human predators and the heron might prove to be a problem.

She nested in one of the large pots housing some shrubbery. All seven (OUCH!) eggs hatched and they have emerged into the pond.

Adam the premises manager has built a floating duck house - the green tarp keeps the weather out, plus a floating platform for the ducklings to rest on. They can't bob about in the water all the time.

Today the drake paid a visit and they all hid from him in the house!

Finally it looks like the Oxtars have become unreliable in damp and drizzly weather.

The other day they leaked. Horror!

﻿﻿﻿﻿﻿﻿
Okay it might not look much, but it is the beginning of the end for them! They've done okay.

I bought them at Sondel Sport on 22nd September 1999 and they have lasted well.

It was the evening that Arsenal played AIK Solna in the Champion's League at Wembley. I remember it well as it was the first game Claire came with me. We had free tickets courtesy of one of the schools I visited back then.

Gooners - We Can Laugh at Ourselves

Okay so we haven't won a trophy for eight years. Not since we embarrassingly beat Manchester United on penalties in the 2005 FA Cup Final.  Embarrassing as they had all game and we robbed them. Shame.

So this year after another bad start we had ten games left, three points for a win and we were seven points adrift of our North London rivals, the almost laughingly named Tottenham Hotspur.

The race was on to see who could realistically finish 4th, and qualify for the lucrative Champions League.

On Sunday, all the Premier League games were being played at the same time to avoid any cheating!

We went into the game one point up after a fantastic run that meant we had overhauled them. All we had to do was match their result and we would win the 4th place.....

We scored at Newcastle and led 1-0 before they scored and won 1-0.... Status quo restored.

They haven't finished ahead of us since about 1986.

So we won this prestigious cup.....

Monday was the first time I have ridden to work this year. Such has been the longer than usual winter we have experienced in the UK, that my riding has been heavily curtailed.

Despite having a train season ticket until June 6th, I needed to get the bike to Neil Harrison, aka Steptoe, for its annual service. It also needed the alternator belt replacing.

BMW have service intervals of 6000 and 12000 miles and recently as the bike has got older I have dropped the ones at 6k.

For a first ride I was a bit uncomfortable. This may be due to my Hood Kevlar lined jeans being a little baggy under my arse after the best part of 10lbs lost on a Slimming World programme. Although it might be that I have ridden 75 miles nonstop since last year!

It may also be something to do with having to wear Held waterproof over trousers as it was drizzling all the way to London. After a fine dry weekend Monday was not very pleasant.

Luckily, traffic wasn't too bad and I was at work pretty promptly.

Steptoe is based in South West London and in the opposite direction to home. The eleven miles from work in London's congested traffic took 45 minutes.

It goes to prove that the local government's congestion charging is purely a money making exercise and that it pushes excess traffic to the boroughs outside the central zone! 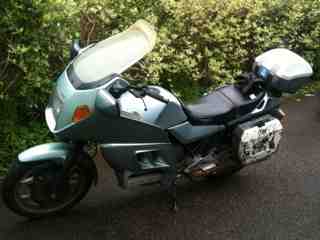 I've not ridden one before and despite the buzzy feeling through the pegs it cruised at 5000rpm all the way home, where I eventual arrives two and a half hours after leaving work.

It might not look very pretty but it ran okay and back to work on Tuesday. And the weather cooperated as well. Dry and cool in the morning and dry and warm in the afternoon.

The ride to collect the GS took a little longer than the day before, although I did leave a little later and encountered more traffic around the periphery of the C-Zone  plus a frightening number of kamikaze cyclists.

Why do the owners of the slowest vehicles on the public road insist on squeezing up the kerb side of buses, coaches and trucks?

I had one do it to me despite my indicator running and being hard on the left; my foot less than a foot (!) from the kerb!

The GS ran sweetly on the ride home and some three hours after leaving work I pitched up on the drive. Just in time for dinner!