Something of a disappearing style of "fast food" being overtaken by foreign imports.

The traditional food of Londoners is sadly on the decline but real purveyors still exist.

Two can be found in Islington and geographically not that far apart.

Whilst all around them the trendification goes on in leaps and bounds, Clarkes in Exmouth Market in Clerkenwell is still there. Their neighbours are no longer local shops for local people but imported coffee shops and the paraphernalia of the more money than sense set. "I saw you coming" couldn't be more apt.

Luckily the oasis that is Clarkes is there for is that like to keep at least in touch with our heritage.

The other Islington Pie & Mash shop is Manzies in Chapel Market. A stone's throw from Upper Street and its New Labour connotations; all trendy with no real foundations. Honest grub for the working class or indeed anyone not afflicted with vegetarianism!

When I mention heritage. My paternal grandparents lived for over 40 years in Lower Morden. A neighbour, next door but one, was a Harrington. The owner of one branch of what my Gran called the Harrington "eel pie" business. Her son, Vic, moved in more recently! We are talking the 1980's here! He had inherited the other branch of the family's south London shops.

Where are they now? The one on the A3 in Battersea I went to a few times on the way to work on evening shift went AWOL a while back. I've heard that there is one in Tooting or Mitcham. Anyone know?

As Londoners it is our responsibility to preserve our customs and to help them co-exist with all the newcomers from the old empire and latterly Europe, both easy and west.

You have your mission.
By InvictaMoto - October 24, 2007 No comments: Links to this post 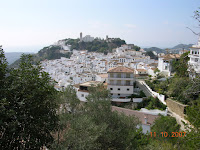 A long walk and a paddle on the almost deserted beach at Estepona before a drive up the mountain to one of the "white villages" of Andalucia.

Casares is perched on the side of the mountain and comes into view as you round a bend in the road.

Well worth a visit. 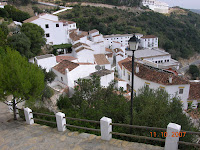 Email ThisBlogThis!Share to TwitterShare to FacebookShare to Pinterest
Labels: Spain

After staying in Cordoba the night before we were handy for Medina or Madinat Al-Zahra as they call it locally. 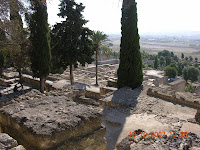 We arrived about 1100 after a late morning and getting the car from the car-park and the heavy traffic in Cordoba!
The car-park at Zahra is quite small and less simple once a coach or two are involved. We ended up on the way in, half on the road and half in a ditch, and they charged us 80¢ for the privilege.
On the other hand it is free for EU citizens to get in!
For the next three hours we spent walking in the burning heat and looking at the magnificence that Abd ar-Rahman III built and named after his wife. 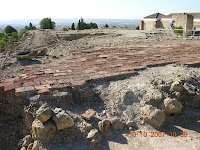 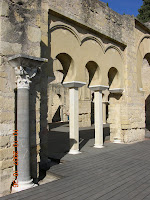 As well as a palace it was also his main seat of power and was connected to the city at Cordoba with a brick road, sadly not yellow or paved with gold.
The site is in two halves, the business and private areas. It is hard to see the difference. Both show an oppulence that was designed to show his power and visitors got the IKEA system of walking round and round to get to his official "office" or the throne room. The best of the discoveries was in the private area and is covered to protect it. 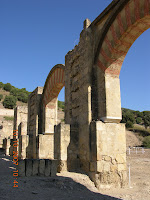 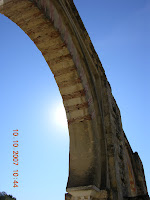 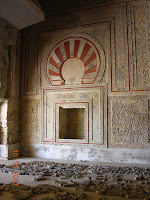 The work of discovery and restoration will take years and years.
By InvictaMoto - October 10, 2007 No comments: Links to this post

Up and off to Cordoba. This time the motorway past Malaga was clear and we made good time to the turn off up the main N331 towards Cordoba. We were slowed as they are building the motorway alongside it.


On arrival the GPS had is perfectly on route but it can't plan for local drivers blocking the road. After a detour and a bit of manoeuvring we arrived right by the Mesquita. Coppers everywhere. The reason was some European conference on intolerance to Moslems. Didn't are too many delegates that looked vaguely Arabic etc.

The hostel I had chosen was recommended in the Rough Guide to Andalucia. The Hostel Santa Ana is a short walk to the Mesquita. After parking in the private garage, we set off for lunch and then into the Mesquita. We even went back to the hotel to get another couple of Nikon batteries for the still camera.

I'm still not convinced about the movie cam. Although we managed to take 30 different short films in and around the Mesquita itself!
We had a long walk that ended up in the new city. Once again the hunt for chocolate and churros was thwarted!


By now it was time to change for dinner. This was taken in a Moroccan restaurant near to our hotel.


Now it's time to delete the chaff off the cameras before tomorrow's trip to Medina Azahara and then back to Cala de Mijas.
By InvictaMoto - October 09, 2007 No comments: Links to this post

We were up before 5am for the drive across to Gatwick, where we arrived at the parking about 6.30am.

No problems at all getting there and none leaving the car. The reason we went so early was due to the expected (and reported in the papers!) long delays at the security check. In the end we were through in 8 minutes!

Luckily there were no delays on the flight and we arrived on time. We had hoped to meet brother's party on their way out, but an hour and a quarter queuing to get the hire car put paid to that.

In the end we got a diesel Focus instead of the booked Fusion. Not a bad car, although damned heavy and I keep stalling it when on the hill out out the apartment parking!

At night we went into Fuengirola for dinner. I can recommend the portions at the restaurant. If only I could remember the name! 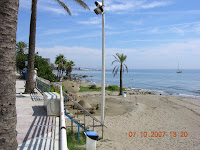 Local day. Got up late after the long day we had had the day before and after breakfast we Went to Marbella. We got parked easily and walked down to the promenade and then all along it westwards until it ran out! On the way past the Banana Tree pub I ducked in to see that the Arsenal were 2-1 up over Sunderland. 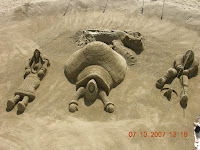 fish was attracting us. We had sardines and salad and a couple of small beers to quench the appetite and thirst. Man was it hot!

We had a swim in the late afternoon on the beach just down from the apartment. The water was freezing at first and then we acclimatised.

In the evening we worked out the TV was showing UK channels and we saw the Jocks lose the rugby to the Argies, Top Gear and then Michael Palin in Eastern Europe. Has he been to Slovakia yet? I'm sure he can't miss the opportunity to visit Andy Warhol's family home in far eastern Slovakia!

Whose idea was it to go to Malaga to shop and have chocolate and churros?

The traffic even after 11am was horrific! The 25 miles from the apartment took over 75 minutes and we were finally parked in the cool of El Corte Ingles car park. This is one hell of a department store. It sells everything. Even Piaggio scooters!

Our first stop was the market for fruit and vegetables. Tomatoes that taste like they should, and everything on a scale about 50% bigger than at home.

The chocolate and churros part of the deal was thwarted as we couldn't find the little back street where we had enjoyed the thick chocolate and sweet doughnut like churros the last time we were there. Instead we had to make do with a coffee.

The drive out wasn't as bad as the drive in.

After another swim we decided to eat out again!

Tomorrow it is our longer trip to Cordoba. I even borrowed a digital movie cam for that!

Dear Fellow Bikers and Motorcyclists,
I am organising the annual Kent Pet Food run on behalf of the Tunbridge Wells & Maidstone RSPCA group based in Kent. The group is totally self supporting and receives no assistance or financial aid from the RSPCA itself.

The main meeting place is Hein Gericke car-park in Maidstone at 1100. Hein Gericke GPS co-ordinate is N51.280168 E0.521644. The aim is to depart HG at 1130.
I am also looking at adding a couple of meeting places for riders to collect and then ride to the main meeting place at Hein Gericke.
The first will be for anyone coming from the north/west at the Oakdene Cafe. The ride-in will be co-ordinated by the Kent BMF group. Lookout for their bright yellow reflective waistcoats. Meet there in time for the short ride departing about 11am from the layby opposite the cafe.
The second from the other direction at the new M20 J11 Services. The run from here will be led by me and we will take the A20 route not the M20 to Maidstone. Once again look out for the bright yellow BMF waistcoat. I plan to leave the services at 10.15am.

The kennel we will go to is primarily for dogs looking to be re-homed. They are using part of a kennel at Boxley near Maidstone. Please bring along dog food and your wallets!

**** Destination has been changed by the RSPCA from this kennel to another in the Maidstone area. Sadly this new kennel doesn't have any facilities to make drinks and food. (amended 25/3/08) ****

What do you get out of it? A cup of tea, maybe a biscuit or even a piece of cake, plus the warm feeling that comes with helping to keep the dogs and puppies in the kennels alive and well. Hopefully the lucky ones will be fostered and adopted rather than seeing out their days in the kennel.

The event has been advertised to the clubs I am a member of and later in the year I hope to get some flyers made up to place in dealerships around the county. I have also written to all the UK monthly motorcycle magazines and the BMF's "Motorcycle Rider" hoping to get a decent turnout!

If you are reading this from a link from one of the bike club websites and forums I have posted on, or from a club magazine, please feel free to pass the details on to any other riders you meet and see if you can recruit them to come along!
So that we have an idea of the numbers that might turn up on the day, please could you email to say that you are coming (and the number to expect!!). It will help the volunteers make sure there are enough tea and cakes for all!

You can see more about the local group on their own website - http://www.midkentrspca.com/