It didn't take long to find the "usual" chocolate shop. The same lady works in there was in all the years we have been going to the St Nicks. Since 1985.
I bought a few things, some to take to work, some for Christmas and some to eat during the day!
Once back at the bike it was already 1425 local time so I set off around to the meeting place. Like a ghost town. There is some bike parking near the big church so I went there. A couple of non-local Belgians had arrived. Just as nonplussed as me as to what was going on.
The web page definitely has this weekend on the poster.
I waited a while and with My Ferry having a three hour gap from 1645 to 1945 I decided to take off along the coast.
The sand covered the road in places between the Thermae Palace and Middelkerke. But rather than risk it I picked my way through the car tracks.
On the E40 again I set the cruise to 120kph. One of the successes was to work out how to change from miles to kilometres.
I arrived at Calais just about 1535. Checked in for the earlier 1645 sailing and road to Lane 340 to await the ferry. 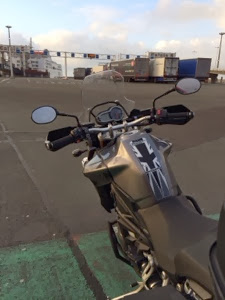 Once onboard, Döra was tied down in the rack and I went to the brasseries for a croque Monsieur and a coffee. 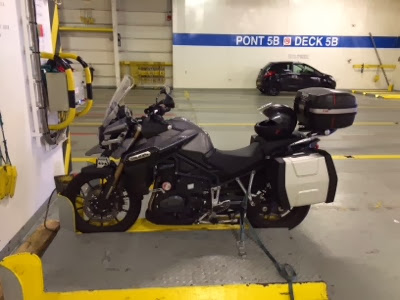 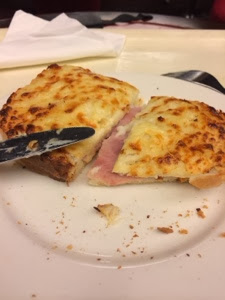 It looked very murky as we went parallel to the French coast.
The crossing in the end took just 90 minutes. There seem to be far fewer people on this ferry than on the rival P&O ferries on the same route. This is a good thing.
Far less pushing and shoving on the stairs to get to the car decks! Fewer people filling the brasserie and bars.
Once ashore I fell into a rhythm with the cruise set on 70mph. I should have changed to kilometres but forgot.
I missed the Middelkerke turning and ended up going to Jabbeke and the A10 entry into Ostend.
It seemed eerily quiet. Very few bikes. Shit! Wrong date.
The rally site has moved to a new venue and I guess that means that fewer bikes are parked in the city.
I did a ride-by where we have met St Nick every year I have been since 1985.  Lots of metal fencing and entry forbidden signs.
I parked around the corner as it looked more hospitable. 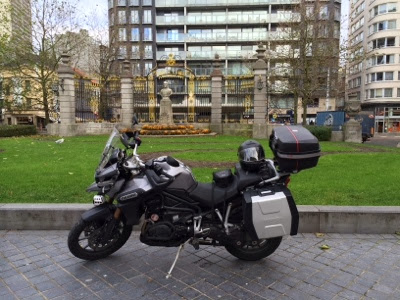 There were some other bikes there too.
I went to look for a coffee and the chocolate shop we always go to.
Found both.
The cafe bar was full of smokers but the back was separated and smoke free. Had a coffee whilst trying to get the wifi to work. No success with that.
By InvictaMoto - November 30, 2013 1 comment: Links to this post

Up early and off to the Port of Dover. Arriving at 0730 it was a little disappointing  to see no bikes there already.
I hung about until 0745 and then made my way around to check in. A little after 0801 I was in Lane 149 waiting to board. No other bikes at all in the loading lanes.
Jean Sans-Amis obviously.
It was about 6.5C when I left home rising to a positively balmy 9C at the port.
As usual My Ferry is late into its berth on the incoming trip. So not boarding at 0750 as the info boards say!
I was first on and rode the length of the ship to the bike racks in the starboard bow.
The crew guy had it tied and secured in a minute or so. This is so much better than the messing about on other routes. 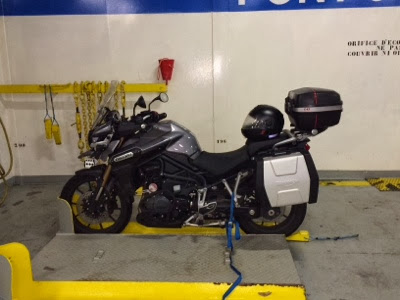 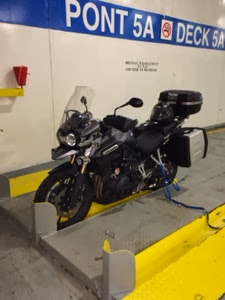 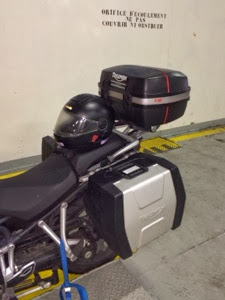 I was in the restaurant quite early and decided to pass the day with a full English. 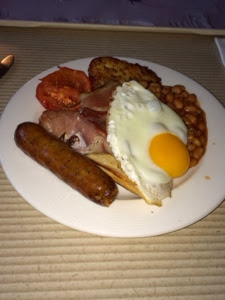 So now only two hours to kill before landing in Calais.
Had a realised I was solo on this trip I'd have brought my Kindle!!
By InvictaMoto - November 30, 2013 No comments: Links to this post

Getting ready for the weekend 2

Fitted the panniers. Gave the lights a buff over.. Tyres good. Quite mild this time of night. 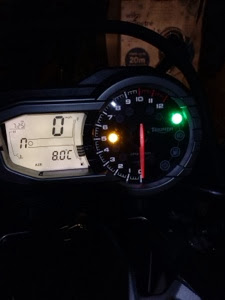 Had to scroll a bit to find that display!! Flashed off a few pix of Döra.... 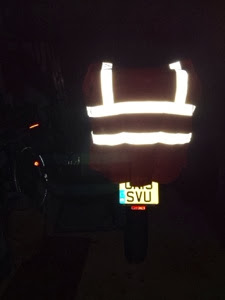 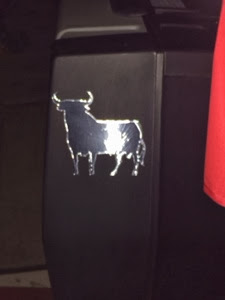 And Bully shows up quite well.

The French are allegedly enforcing the law from years ago whereby bikers are supposed to have four white stickers front, rear and sides of the helmet.
I have never bothered but for £1.95 I bought four black stickers that in the light show white.
Let's see if Mr Gendarme is impressed. 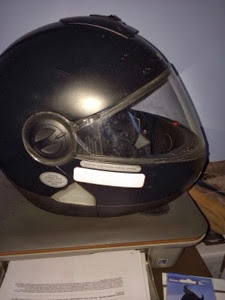 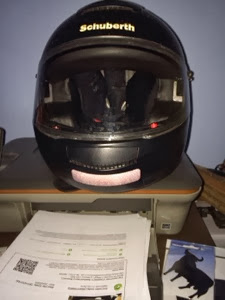 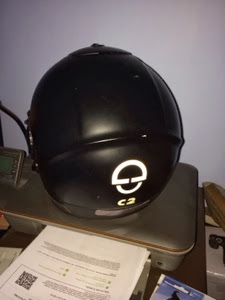 At the back Schuberth decided to put their logo and model in black that reflects white!
By InvictaMoto - November 29, 2013 1 comment: Links to this post

I have this D50 to use. It's not worth much on eBay but it takes pretty reasonable pictures.

If only there was a firmware update so that it would take a bigger SD card than the 2GB maximum it currently takes. 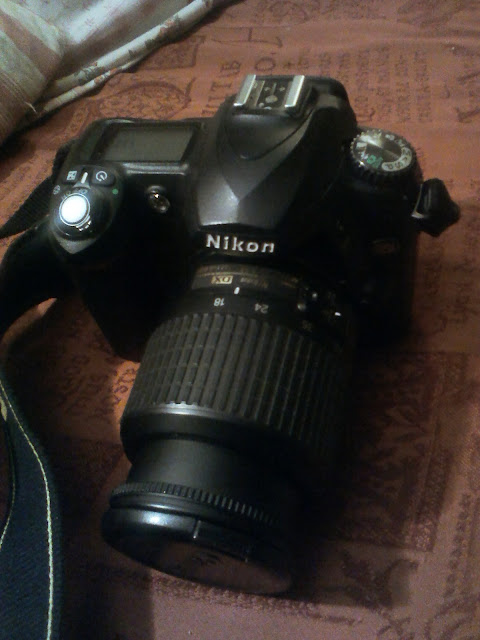 The coldest year for the Sinterklaastreffen that I have been to was 1991.

Audrey and I went on her XJ900 as I had the DR800 and it wasn't good two up. The XJ was an excellent tourer. Shaft drive and frame mounted fairing.

F501OMJ was superb. I later bought one with an H reg.

Anyway. By the time we had got into Belgium it was freezing.

Firstly my visor iced up, then my glasses. I had to pull them down and peer over the top. Then my eyebrows iced and froze.

We stopped and took this shot on the old Olympus OM10 - that I still have!

The visor was a graduated one with a darker tint at the top to help with the sun. The helmet is a Freddie Spencer replica Arai.

Changes to British Standards later outlawed lots of tinted visors for use in the UK.

Getting ready for the weekend

It seems absolutely ages since me and Döra were last out.
I had planned to get her out and give her a quick wash and brush up prior to this coming weekrnd's two trips. Sadly with the weather only being a few points above freezing and sunset about 4pm there's so little daylight left to get things done.
So Döra sits in the garage waiting for Saturday's trip to Belgium and her first St Nicks Rally. 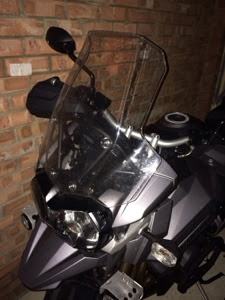 The plan is an early ferry across to Calais and then a ride along the coast to Ostend. It's only about 60 miles on the other side but it can be very cold.
By InvictaMoto - November 26, 2013 1 comment: Links to this post

Maybe when you take up internet dating, total honesty or rather, truthfulness, might not be at the highest place on your checklist.

Things like height, weight, hair can all be exaggerated but a picture? I guess you could send an old one.

I sent Claire one of me wearing one of these, plus bike gear, and taken in Venice! 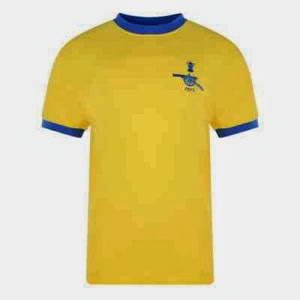 And now thanks to www.camporetro.com I can replace it!!! 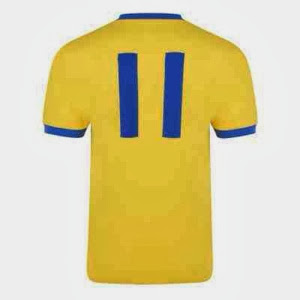 The new shirt has the numbers 11 on the back,  that mark it as a replica of the shirt worn by Charlie George. The Arsenal hero who scored the winning goal that beat Liverpool at Wembley.

Campo Retro also have the red and white shirt from the same era... Mmmmm? Christmas is coming.
By InvictaMoto - November 26, 2013 No comments: Links to this post

Former MP Lembit Öpik is renowned for his 'full-on' approach to all he does. Now he's channelling his irrepressible drive to protect and promote two core passions: Liberty and Motorcycling. Lembit joins MAG's newly streamlined team of professionals. Their mission is to take a leading role to stand up to threats to riders' rights and expand the use of motorcycles and scooters in the UK.

Lembit's new role as Director of Communications and Public Affairs for the Motorcycle Action Group (MAG) was announced today at the National Motorcycle Show in the NEC. This puts him at the heart of UK motorcycling and the new team at the core of MAG's Campaigning and Lobbying activities. 'People know me for a lot of things!  But few of them know biking's been an enduring part of my life. I rebuilt my Yamaha YB100 in 1982, and have ridden two wheels ever since. Currently I've got a Suzuki GS1000, and am as passionate as ever – and that's why taking on this new role feels like coming home.'

Lembit isn't tackling the communications and public affairs challenge alone. He's working with biking campaigns guru, Dr Leon Mannings, who's got an exceptional pedigree. Lembit says of Leon 'if Zen and the art of Motorcycle Maintenance came to life, it would be Leon. He's a combination of perspective and limitless resilience, and he has a tremendous record of winning for powered two wheeler riders.'

Lembit and Leon have clear ambitions for MAG.  Lembit says 'as an MP, I chaired the All Party Parliamentary Group for Motorcycling.  Back then, the Department of Transport saw bikers more as a hassle than an answer to congestion and pollution problems. Now, the mood at the Ministry is changing and we've got a rising number of great allies in Government.  Steve Baker MP is an outstanding Chair of the All-Party Group. I get on well with Transport Minister Robert Goodwill MP and know he will engage on bike policy.'  Leon adds 'with a newly sharpened approach, a better relationship between bureaucrats and bikers is evolving.  It's about to become even more productive. I've worked and won on issues before, and we now have better prospects than ever for really moving the positive role of motorcycling further up policy agendas – at Local and Central Government levels.'

MAG Chairman, John Mitchell, underlines MAG's determination to boost the strength and penetration of its voice for bikers. 'We've always been at the forefront of battles over issues for bikers since we formed to fight the authoritarian helmet law in 1973.  Other threats have come our way, most involving the replacement of common sense with patronising over-regulation. Lembit and Leon are a tremendous new force in the fight-back for freedom: the Institute for Economic Affairs even identified Lembit as the most 'libertarian' MP in the country, and he really does 'walk the freedom talk' in word and deed.  Leon has an excellent mental map of the policy jungle, and has a key role in our awesome team.  Changing the regulatory tide is bigger than just biking – it's actually about liberty.  With Leon's insight, clarity and stamina, real progress looks likely. And, if one person combines political focus with the passion needed to fully reflect MAG's determination to defend the heart and soul of biking – it's Lembit Öpik.'