Claire wanted an MP3 player for her car but not spend too much money. It needs to have a screen to choose the music and it has to be able to take albums and not just tracks. And this Walkman fits the bill.

There is a drawback of course and it's name is Apple.  Although I own all the music I have ever downloaded from iTunes or Amazon or ripped from CDs I own, it's Apple's music that will copy to the Walkman, but has been locked so that it can't be detected and therefore can't be played.

Downloaded from Amazon and ripped from CD's works perfectly.  Another reason to get Apple and their shit out of our lives. I'll start to get stuff on it for her!  Trouble is she's not really into the same music as me.....

On top of the iPhone problems I am having it just goes to show how the big corporations are ruining this world. Too much power.
By InvictaMoto - January 31, 2015 2 comments: Links to this post

Back in December my 5S decided to lock itself and the guys at O2 managed to reset it back to factory settings.

There has been an intermittent problem since iOS 8 came out that has affected my phone, and from wha I have read on the 'net loads of others, where no matter what the battery level is the phone powers down. I have had it do it anywhere between 21% and 65% of life left.

I logged into apple.com/uk/support/contact last week and before it had finished the online checks I got a notification that an iOS upgrade was ready.

I installed it and have had three days without it tripping out. Until today. Once again I logged in have now had to book a "genius" session at the Apple Store in Covent Garden for them to look at it as the "recommended" suggestion.

When you get a rescue dog you also sign up to the idea that you will get the little darling trained so that it is not a danger to the public, or to you and itself.

So we signed up for an eight week course that leads to a bronze certificate from the Kennel Club, that shows he has reached a certain standard.

Week One was okay. Apart from Reggie taking a dislike to a French Bulldog and a Boxer, and growling and barking, he did all the exercises like a pro.

Week Two. Last night. Pretty much the same pattern. Both flat faced dogs were barked and growled at. Steve the instructor came over and showed me how to be boss.

Sharp tug on lead and "no" deep and forcibly. I suppose it's what I have been doing only gentler!

Mind you he didn't growl or bark at them again. Another almost perfect performance again.

- Posted using BlogPress from my iPhone5S
By InvictaMoto - January 30, 2015 No comments: Links to this post

Changed the URL of the "Florida!" blog to http://devalltravel.blogspot.co.uk/ as plans are afoot to extend our trips beyond the Sunshine State's border.

More on that as it happens.
By InvictaMoto - January 30, 2015 No comments: Links to this post

Email ThisBlogThis!Share to TwitterShare to FacebookShare to Pinterest
Labels: Florida

The first proper dusting of the year arrived yesterday in Hythe.

After the rat catcher had arrived, sadly no pied outfit and flute, I took Reggie for a walk. Picking our way in the car past miles of trucks on the M20 towards Dover. Sensibly they were in the left lane so we could get past without incident until the junction with the Old Dover road at Capel when they filled both lanes. Well managed someone!

We parked up above the ferry terminal near the White Cliffs visitor centre. Not many cars about as it was a weekday and very cold. The gauge in the car showing 2C as the outside temperature.

I did a mile or so on the paths overlooking the terminal and Reggie much more as he runs back and forth. And then the drizzle started. 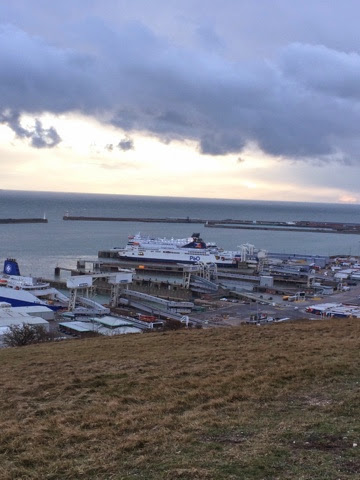 Dog walking will be fun in summer!!

The drive home was a little quicker as roads away from Dover weren't jammed with trucks, although some curious lane closures were causing bottlenecks at all the roundabouts between the port and the top of the hill before Samphire Hoe.

We had settled down to catch up on some TV programmes recorded on Sky when Claire came home. It was then we heard the rattling of something on the conservatory roof. Rain turning to hail and then.. Snow.

It came down quite heavily just as we were leaving for dog training classes. The roads a little slippery but not too bad. The higher up we went from sea level where we live to Saltwood and it was thicker. Maybe two inches where we parked.

So this morning much of it had gone but higher ground still shows a dusting. 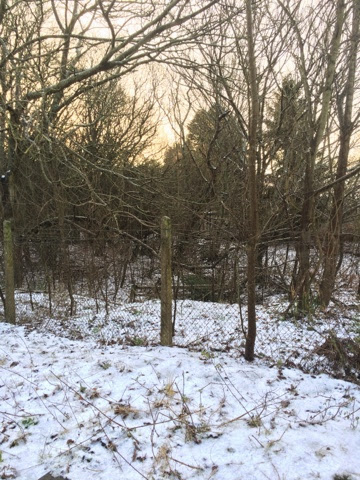 And the miracle? Southeastern trains still running to schedule!

By the time we had got towards the Thames crossing at Dartford, of snow their wasn't a sign. As he hurtled towards London through Essex it was bright and just damp underfoot.

- Posted using BlogPress from my iPhone

And here is another tale of woe.

When you have British Telecom's broadband in your home there are a few "free" extras.

One is to be able to watch BT Sport on your laptop/tablet/phone and in non-HD on a TV.

The other is free wifi across the country.

BT hubs provide wireless in the house but have a public side so that other BT customers can use a bit of your connection. It costs nothing and they don't use your bandwidth.

This used to work pretty well but was clunky. How many wifi connections need a user name and password entered every time? Most usually connect as soon as the phone or computer picks it up.

Not BT. When the wifi icon appears you have to run the app.

Except it fails all the time. I thought it was me until I read the reviews on the Apple App Store. Me? Yes, but also lots of others.


- Posted using BlogPress from my iPhone

I have been using the Blogger app successfully on the iPhone for some time and it has always worked fine.

Considering Blogger is a Google company, you might have been tempted to think that the same app on an Android platform would have been better still.

Sadly, the Google version of Blogger is absolute rubbish. It can't even display posts in the editor in the order they were written. Finding the "last post" is a nightmare.

However, the blogger-me app works okay on the tablet and does manage to get the posts in the right order.

How does Blogpress solve that? It doesn't really as it is an iPhone app!!

But it was worth a try. This post was originally created with Blogpress.

- Posted using BlogPress from my iPhone

I suppose we have had the infestation for quite a while, but having a dog, and a terrier as well, has revealed that our garden looks to be a rat run.

Not on the surface though. With the garden decked over for the most part we have provided them with a relatively dry runway across the garden.

Reggie started to dig in the garden and uncovered a tunnel in the earth, Every time he goes out he is running around, sniffing the cracks in the deck and "following" the scent trail we suppose.

So today I am waiting in for the pest control man to come and have a look and set some bait or whatever to kill them, or at least dissuade them from using my garden.

As for Reggie. He's relaxing on the couch.

Email ThisBlogThis!Share to TwitterShare to FacebookShare to Pinterest
Labels: RATS

I currently use an Oxford magnetic tank bag. It's a small enough for those days when you just need somewhere for your spare specs and wallet but it also expands. But it is the magnets that are my concern.
No matter how much you wipe the base of the bag, the magnets will start to scratch the paint.  So before the Spain trip last summer, I started to look at the Givi tank-lock system. In the end I shelved that as I had only recently bought the new top box and and inner bag!
So with Spring approaching (sometime any way!) I decided to have another look. Prices don't seem to have changed much, and when Googling, the overseas shops seem to have prices about 20% cheaper than here. With postage taken into account they are still cheaper.
So, I ordered the Givi 3D604 bag from Motocard.

Delivery takes about a week and that's okay as I don't intend to use it for a while.
By InvictaMoto - January 29, 2015 4 comments: Links to this post

The weather has been pretty cold on occasions and so with other commitments poor Döra hasn't been out of the garage for over a month.

So it was with some trepidation that I togged up and rolled her out onto the drive.  Alarm off, then press the button. Boom. First time start.

Where to go?  I was going to give her a ride around the Marsh to give her a run. It was 4.5°C when I set off along Burmarsh Road towards the west right to the end then round to Newchurch then Ivychurch and then Old Romney.

The roads were generally traffic free which is a good thing as often they are less than two cars wide. The most fraught thing is meeting cyclists, either direction, who seem to have no sense of which side of the road to actually ride.  In the UK it's "keep left".

From Old Romney I joined a few other bikes on the A259, most turned off towards Lydd and Camber. I carried onto New Romney and back home along the A259.

Not far, but by the time I got home it was down to 3°C but feeling much colder. So much for January's ride out! 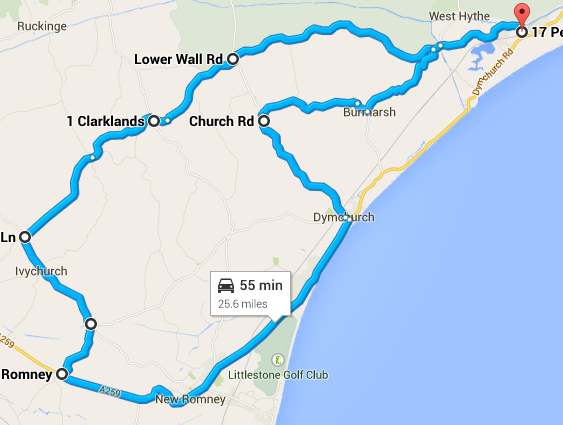 The next planned ride will be to join the Motorcycle Action Group's "Fred Hill Run" on February 8th.

The glutton for punishment that I am I have decided to give the Kent Pet Food Run one last go. Over the years despite publicising to as many local clubs as possible, the run seems to be ignored by many people.

So this is most likely to be my last.  I said that last year, but with so many dogs and cats (plus other small pets) needing a new forever home I thought I'd give it another go. The last hurrah? 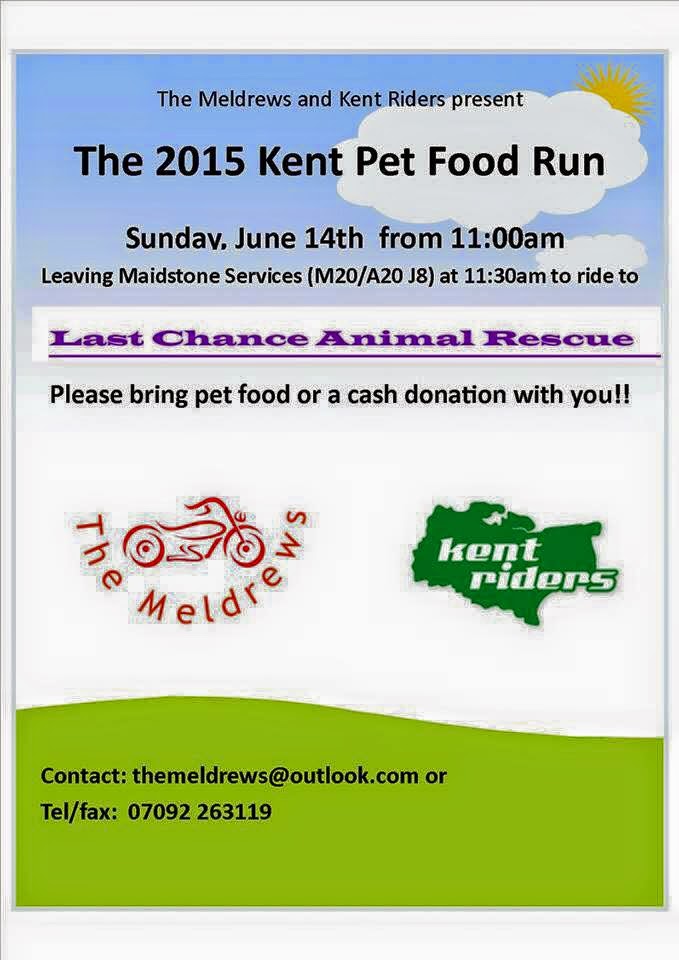