As soon as you see a bloke all togged up on a freezing day like we had today and you immediately think "how can he do it?" you know you are an FWB!

That was me as I walked 300 yards to the sandwich shop at lunchtime!

Email ThisBlogThis!Share to TwitterShare to FacebookShare to Pinterest
Labels: Fings

* THIS IS NO LONGER AN IMTC EVENT *
Further to the original post we have decided to drop the need to send a deposit and to book rooms over the internet and allow members wanting to come along that freedom.

The hotel will still be the Campanile in Gouda. To book direct, go to their website and book the room yourself. Just let us know you have done it.
The run on Saturday will more than likely be to Amsterdam for a full day on our feet unless someone can come up with a better suggestion? I have a suggestion of a motor museum and also the original idea of going to Arnhem and Nijmegen.

This trip was by car. Scraping the ice off the windscreen in the morning was enough to convince me that I really am a Fair Weather Biker nowadays. As you can see from the murky pictures, it was foggy in Nord!

I know I should have gone by bike and froze to death to be a "real biker", but in the end we were warm and were able to visit the hypermarket at Grande Synthe and carry back 4 cases of beer and a large selection of wines! 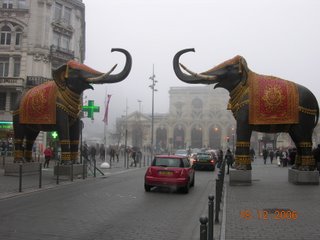 Lille itself was difficult to navigate and I ignore "Doris" (my GPS) as she seemed to be off on one of her "funnies" but in the end she took us right to the Grand Place. Unfortunately, the car-park was full and we had to look for another, eventually finding one above the Tanneurs shopping centre.

On the way we drove towards the Flandres Station along a road lined with elephants. Not real ones, but large models of elephants as part of the decoration for a cultural event about Hindus and Bombay. More on that on this website: http://www.hindu.com/2006/10/14/stories/2006101417592300.htm 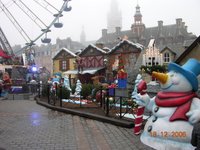 We walked back the same way as we didn't have a map and didn't want to get get lost in the middle of nowhere in the back streets.

Once back at the Grand Place (car park still "complet") we saw that they had a small Santa village around the bottom of the big wheel.


It was lunchtime and so we decided to find somewhere to eat and then enter the "Marché de Noel" in neighbouring Place Rihour.


And we did. The €10.60 lunch menu in the Brasserie Floré, also in Place Rihour was all we needed. If anyone can tell me what "hampe" is I'd be most obliged. It looked like steak and tasted pretty much like steak.... but....


After a leisurely meal we were left checking the watches as we had to be back at the ferry terminal for the 1945 (local time) ferry home. So with Lille some 70 miles away, an hour, we needed to leave the area no later than 1800... and it was already after 1500, and, (too many ands!) we still had the traditional English booze-cruise element to get over and done with.


We decided that as it was getting dark and the fog was thickening we would leave asap and drive back the Auchun at Grand Synthe on the coast. And so we did. The traffic was heavy in both directions on the A25 and I have to admit my eyes were straining to see the other cars, many of whom have never thought of using lights in fog.

We had a reasonably quick tour of the hypermarket getting four cases of beer (only one for me!) plus of course some wine. Red wine. This is for Claire and visitors. Recently I seem to have developed a problem with red wine! Or rather my stomach has! I love to drink it and then am ill for a few days afterwards. So I stick to white. I've not regressed to childhood and started drinking sweet white, but am stuck on a nice dry white.

My granddad was in the wine trade all his life. Starting work in the cellars for Chaplins (we still have wooden coat hangers with their name and what we would now call a logo) in the arches near Fenchurch Street around the First World War when he left school, until he died in 1968 soon after retiring as a senior manager in Wines and Spirits for NAAFI.


Of course we bought some other staples... cheese, smelly feet sausage and some tins of cassoulet for a quick lunch snack. Always good to have in the cupboard and one of two other bits and pieces.

The last part of the drive along the A16 was better, cold but fog free.

In all we had a great day out. Capping a good long weekend. 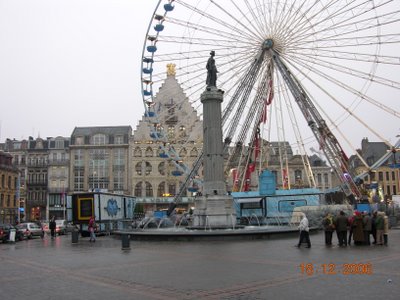 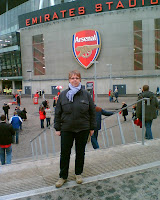 Claire's first visit to the new stadium to see the Arsenal play and I took this picture. It's a popular spot at the top of the steps by the stadium end of the north bridge.

Sadly with a mobile phone it is hard to get a decent picture, the quality isn't there and you can't get too much in without it all looking a bit an the small size.

The game was a 2-2 draw with the Gunners coming back from two down to make a game of it.

Wipers for the Day
Planning has started for a day trip on Easter Sunday to Belgium to take in a few WW1 Ypres Salient sites and then the "Last Post" ceremony at the Menin Gate before returning home.

The run is open to SOC and IMTC members.

The "Last Post" takes place at 2000 local time and we need to be able to get back to the bikes and then ride to the Shuttle terminal, so 2220 seems about right.

Of course, lunch will be factored in.

Depending on what everyone wants to do, I can plan a short trip around some sights after lunch arriving back in Ypres in time for tea and then a walk to the Gate for 8pm.

See update to this page.