The last day of half-term holiday and we decided to go to Sissinghurst Castle Garden.

Usually by now we have been a few times to see the gardens as the planting changes with the season.

The gardens now filled with roses and irises.

Our first stop was coffee and a scone. A cheese and bacon scone. Very nice.

Chris Grayling, Secretary of State for Transport, met the Motorcycle Action Group to discuss transport policy, the environment and the role of motorcycles in reducing emissions.
Mr Grayling and MAG met to discuss his position on transport and the environment; and to establish the extent to which he has considered powered two and three wheelers as part of the transport solution, especially in urban areas.
His primary environmental focus is CO2 and its impact on climate change.Lembit Öpik, MAG's Director of Communications & Public Affairs, explains: 'MAG has spent much time and effort on the environmental agenda and the Minister seemed impressed with this. We explored the technical aspects and we agreed to send him further information. We also spoke about how motorbikes are part of the micro-mobility option, to encourage travel with the smallest feasible vehicles.'
The Minister also understands the need to innovate in the sector. He said: 'the British motorcycle industry failed to respond to the competitive environment in the 1960s. As a consequence, it was side-lined for decades – until it reinvented itself with a good new long-term strategy. That's what seems to be driving the success of Triumph and others now.' Clearly, he approves of that success and of the vision it took to reinvent British motorcycle manufacturing.

MAG believes Mr Grayling will give powered two wheelers their rightful space on Britain's roads as long as he is presented with the right evidence. This should also lead to a further dialogue with his team. There are clear benefits in terms of road space and environmental footprint and these could play a key role in the Minister's thinking on motorbikes and scooters.
'At a time when British politics is generally in flux, it's a refreshing change to meet someone in power who puts doing the right thing first,' adds Lembit. 'MAG can do business with him and that's definitely a very encouraging outcome of this meeting.'
Contact MAG at 01926 844 064 or central-office@mag-uk.org

Once you get to 60 there are some benefits.

If you live in the UK other than England you get a free bus pass at 60. In England we have to wait to 65 or retirement age.

But whenever you reach 60 you can get a Senior Railcard.

Three off-peak trips from home to London would pay for itself and more.

So I got one. First use today. It only works for rail fare. You will still be stiffed by Sadiq Khan's TfL for any buses and underground trains.

As I bought it with Tesco Clubcard no actual money changed hands...

Claire off there on Friday with her friend Ulrika. Hopefully she'll get to see the marvellous show gardens like we have seen on TV.  She may even get around to updating her own blogspot site with some photos.

I will charge up the power pack charger in case her phone's battery get too low.

I will be at home with Reggie.  I have over 7 hours accrued on my flexitime at work and will use 7 of them to have the day off.  I need to think where Reggie and I can go for part of the day!

I will be the taxi driver for them to and from the station as it is.  So we can't go far.
By InvictaMoto - May 21, 2019 No comments: Links to this post

Second leg. Away in sunny Spain. If only I could have been there.

The Arsenal going there with a 3-1 lead but both clubs earlier in the week in the Champions League with a lead, had lost over two games ...

When Valencia scored early it looked as though they could comeback. But two Aubameyang goals put using the driving seat. Then they equalised.

Game on. Firstly Lacazette scored to 3-2 and Aubameyang got his third and it was 4-2 and 7-3 over the two games.

In the other Semi, Chelsea beat Eintracht Frankfurt after a penalty shootout.

Off to Baku Azerbaijan in three weeks for the Final. For me. TV supporter.

Why do we invest so much in a sports team that ultimately takes your support and sometimes fanatical support, and who then throws it in your face.

And that's the polite way to say it.

Another poor laboured performance confirming that Arsenal are only good enough to finish 5th or 6th this year.

A 1-1 draw with a poor team like Brighton sums up a really crap April and May in the league.

But thousands of us will be back to get kicked in the teeth next year.

Fits snugly in a pocket and is not too bulky.

This one half price at £4 in the Arsenal shop on Drayton Park. 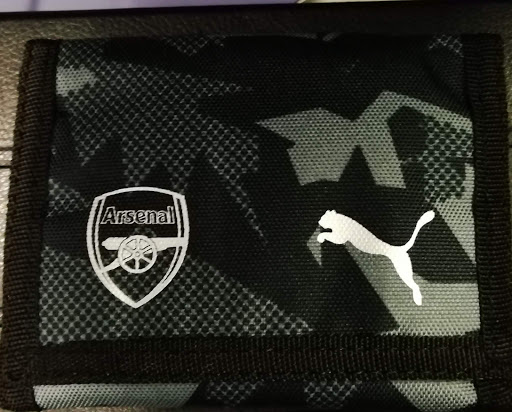 Europa League semi-final this evening and we once again get to play against a Spanish La Liga side in CF Valencia.

We reached this stage last year and were beaten by Athletico Madrid so we need to be at the top of our game at home to win tonight.

After a very disappointing April where there were more games lost than won, we go into the last few weeks of the normal season hoping to get to another Final.

3-1. Incredibly should have been more. Two goals from Lacazette and one from Aubameyang.

Laca had two sitters get away...

Off to Spain a week tonight.