On a very wet and windy day a total of ten bikes and 16 people made the effort to meet at the Blue & White Cafe near Ashford and then ride down to the rescue centre near the Shuttle terminal. Sadly there were only two BMW’s and these were mine and Kev from UKGSers but the numbers were made up by the Suzuki Owners Club - Bandits galore.

Luckily, Julie, the local charity organiser had made it a day to get all the volunteers to come together to meet up and bring their rescued and foster dogs with them so that had we not turned up then the event wouldn't have been a total wash out.

She had the local press there as well to publicise the case of a dog they have in their care that had a hip problem and needs an expensive operation. As a charity they rely on public donations and pledge never to kill any dogs that are not in pain and suffering. Zippy, the dog in question was abused as a pup and can walk by dragging his back legs behind.

Julie also had the local fly-ball team come to demonstrate the dogs’ skills and agility. Some dogs were so eager to please that they played on their own even after the show was over…

In the end the event was a success. We took a pile of food for the rescue dogs and a large wedge of cash. If we do it next year it would be nice to see more (some at least) faces make the effort.

It was only raining after all?
By InvictaMoto - October 22, 2006 No comments: Links to this post

At last! A day on the bike!

It seems like ages since I last sat on the bike let alone had a ride. Things to do have meant that it has sat in the garage waiting for a trip out. The last ride was the weekend in Arras over a month ago!

Today’s outing was a ride up to London to watch the Arsenal at home to the transient Premiership side from Watford.

Despite having a rail season ticket, I decided to ride up. Why? Well, fair weather biker that I am nowadays it was going to be a dry day and reasonably warm. Plus the journey home after a game is horrendous with a train service running one an hour from Charing Cross back to the Kent Coast. Of course, you have to get to Charing Cross in the first place. Sadly, the tube services haven’t been upgraded to support 60000 leaving the new stadium and so the queues to get into the stations are quite horrendous. They could barely support 38000 leaving the old one but no one seems to have spotted that there might be some contention? Or did they and just thought “b*gger it”?

The ride up was okay, 103 miles on the trip and ¾ of a tank according to the gauge. By Maidstone I was down to 3 bars (!) on the gauge and I decided to divert into Sainsbury’s for petrol. I was left scratching my head, as I needn’t have panicked. I don’t remember 3 bars meaning I could only get 14 litres in before! Perhaps I need to monitor it?

On the approach to Wrotham Hill the “50” limit signs were flashing in the central reservation and we all carried on at about 80 until we caught the first of Kent’s finest in their Volvo. We all slowed down, bunched up and the potential for accidents increased dramatically as we started to crawl up the hill. Inching past the coppers testing the limit they would allow. Then the central signs alternated between “50” and “Fog” all the way to the back of Brand Hatch. Of course, of the fog there was no sign. It had been foggy overnight but it had all been burned off by 1pm and visibility was over a mile at least. So why don’t they turn them off? Answers please?

On that section we encountered another Volvo crawling and one of the Highways Agency non-porker cars! Once past them the pace picked up until the A2 junction off the M25. Roadworks. Bad signposting means that the cars are tailed back beyond the start of the exit slip and onto the inside lane of the motorway for about half a mile. This means that the slow lane cruisers and arseholes that want to push in later then crawl along the centre lane and then stop to go left. What a cock up. Once through the traffic you can see that they are all stuck in the right lane on the exit slip, the centre one for those that feel Dartford is a genuine alternative to suicide (it’s not!) is virtually empty, and the left “swoop” lane join the A2 northbound slip is empty…. Better signposting might alleviate the dangers to the traffic on the M25? Or is that too radical for the Highways Agency? How about the Volvo driving coppers hanging about and keeping the traffic flowing?

The A2 itself was free moving all the way past the cameras at Bexley, all five of the buggers between the Black Prince and what used to be the Dover Arms. I opted to cut through the city instead of Hackney. Well you would wouldn’t you?

Roadworks! Bane of the motorists’ world. Commercial Road roadworked to death, Christ only knows what it is like on a weekday! In the end as the stadium has moved half a mile the road up so Highbury Barn has far less traffic and getting parked at St Joan of Arc was achieved with the minimum of hassle. I had a chat with the priest about his idea that the HM The Queen was coming to watch her favourite club in action. At least we had two Englishmen starting the game in the first eleven! Sadly, Mrs Quinn not making until later in the week.

The walk is a little longer but not that bad and it brings you out between the two new footbridges over the railway and see the ground in front of you. Although I’ve seen it a few times and watched it going up from the remains of Islington Council’s Albany Place vehicle and dustcart workshops, it is still spectacular.

The game went predictably and our way, then after a coffee I had the uphill walk to the church to get the bike. I discovered that my boots have a problem in the right foot that makes a squeak when walk. I think the metal shank inside has broken, as the sole doesn’t seem as solid. They’ll last until next year. They are Oxtar and waterproof. I bought them back in 2000 and they have given good service. Never leaked and have seen some really crap weather at times.

On the way back it chilled quite rapidly as the sun headed for the horizon, and I began to question the sanity of wearing my vented Joe Rocket jacket in preference to the more 4-season HG Maxwell jacket. Once again roadworks conspired against me and I took the A13 to the Dartford Crossing and that way back to the A2, heading through the shunts and fender benders near Bluewater to arrive home just as Robin Chav started on BBC1.

I shouldn’t be surprised but later that evening my neck and shoulders started to feel stiff! I know I am overweight and unfit, but stiff neck after a few miles (Okay 160 miles) on the bike shouldn’t be this bad!
By InvictaMoto - October 16, 2006 No comments: Links to this post

Not unusual, but this project ground to a halt quite rapidly. See http://invictamoto.blogspot.com/2006/08/hi-viz-vestjacket-project.html for original posting.

Despite wasting my time and effort to contact the various nation's motorcycle federations and the initial euphoria of getting answers, the whole lot has stalled.

If they all manage to work this slowly or completely ignoring requests how are we to get them off their arses to respond to the re-emergence of the Euro License Directive that might kill off biking for younger riders and make it harder for us to go about our lives?

Let's hope they have someone awake when it arrives and that someone actually gives a toss eh?
By InvictaMoto - October 10, 2006 No comments: Links to this post

Email ThisBlogThis!Share to TwitterShare to FacebookShare to Pinterest
Labels: BMF

I thought as I have a run planned for the South-East Section of the BMW Club, I'd better go and see if the fords that I had seen on Wetroads.com actually existed and whether they had water in them. Sadly, I had to go by car as the previous week I'd been off work for a few days with a stomach bug and was only just getitng over it.

In the initial planning I had discarded a couple that were unsuitable for road bikes i.e. ones that couldn't be ridden on a Wing or RT.... I've got a GS but I doubt that many of my fellow BM clubbers would want to try these.
This left six and all of them in fairly close proximity to one another to the west of Crowborough. I worked out the gps co-ords using the Wetroads site and www.streetmap.co.uk. But before the run on 5th November I needed to ride the route ansd make sure my co-rds were right. Incredibly, they were accurate to a few yards on 5 of the 6. The last one (I optimised the route on the Quest) was at the end of a 1/2 mile rutted and rock stewn path, it was unsuitable for my wife's Getz as well, so I have struck that one off too.

Of the five that remain only 1 was lacking in water, and it was hard to see as the locals parked across it, rendering it photo opportunity free. Another wasn't photographed as we had to wait for Mr & Mrs Green welly to get out of the way to let us across and then one of the chinless tarts gave us very little room. Luckily it was only a few inches deep.

I took a few pics of the others and hopefully some will appear here. I'll label them when I can remember which ones they are! 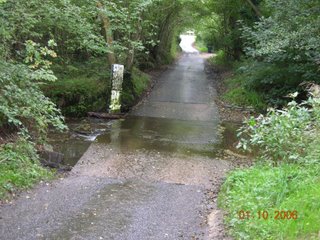 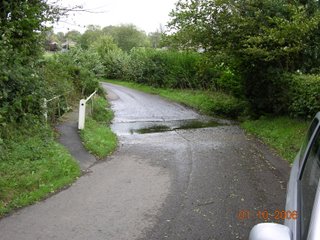 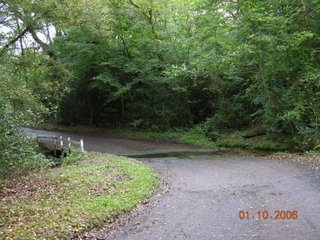 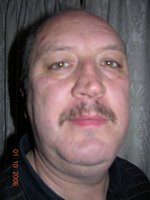 It's over, and thank the Lord. Now the hard part, collecting the money.
By InvictaMoto - October 01, 2006 No comments: Links to this post