After the success of the first Blockhouse Run in October last year everyone I asked wanted to have another trip across. As most of the Centre regulars were available, I picked Easter Saturday.
A £19 recce trip in February (booked through www.driveline.co.uk/postcard) was to make sure I could lead the group, and hopefully a large group, to both the blockhouses and to the lunch venue without anyone getting lost! It worked.
The day dawned foggy in Kent and I set off for the Shuttle expecting to meet a load of Suzuki owners. In fact in our group there was only one Suzuki, the B12 belonging to Centre Sec Paul Bratton. The rest of the group were: Garry & Marie Page on his new Blackbird, Bernie and his grandson Jay on a BMW K series, Bob and Barbara on a Guzzi, Simon on a BMW F650 and finally me on the GS.
Frogside, the fog was thicker and our route to Ardres to meet the Sussex Centre was across country via Guines. In the end we only had one problem; Paul B's marvelous French that led to a massive over order of coffees when we stopped as usual for petrol and breakfast in the ELF Station on the exit from the Shuttle terminal.
At Ardres the Sussex mob increased the party by a further 4 bikes (all Suzukis) and six people. I led us to St Omer on the N43 and then on to La Coupole by following the road signs. 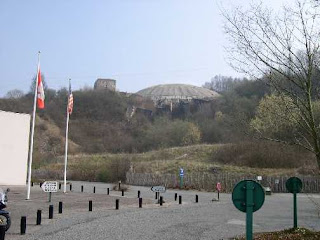 The huge concrete dome was built to house final assembly areas and firing places for the V2 "reprisal weapon", and is set in a natural quarry, but isn't hidden from the air. It relied on 5m thick concrete for defence. There weren't enough of us for a group discount but they do a reduced rate combined ticket for 13 euros to visit the V2 site at Eperlecques as well, luckily our afternoon visit. You are given a headset to hear the commentary in your own language, and this works well in the main. 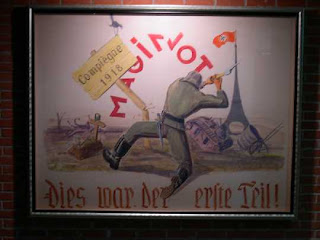 You enter along a long tunnel and in one side chamber is a monument with the names of the 85000 French civilians that were sent to the concentration camps. This is some 10000 more than the number of French Jews that went with them on the trains. The V2 rockets were built by this slave labour at the Nordhausen-Dora concentration camp. The death rate worked out at about 4 slaves per rocket built.
In two small cinemas you can see films about the German occupation of France, and another on the development of the space race culminating in man landing on the moon and the influence the development of the V2 had in that timeline.
On leaving I led the group into St Omer for lunch. The Kent group lunched in Les Trois Caves in Place Marechal Foch. The Sussex party did their own thing in the town centre. When we arrived I had a pigeon-franglais chat with a copper who was in the square as they cleared up after the morning market. He called the cleaning team over and they tidied the area for us to park up. 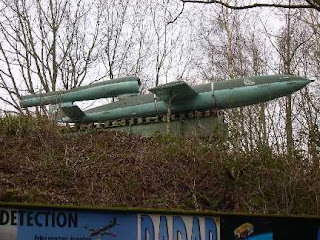 After lunch the majority of us set off for Eperlecques. As we turned in the entrance the small entrance hall and shops doesn't prepare you for what is to come. This blockhouse is built in the woods and is immense. We sent Jay over the moat to show its size in the pics. 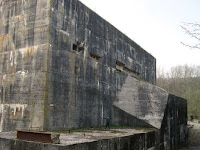 Luckily this site never became operational as the Normandy invasion and heavy bombing rendered it useless. The Germans changed tactics and invented the mobile launchers that the Yanks and Soviets used for their ICBM's.
We came out about 5pm as it was closing and someone suggested having a ride out as we had two hours to the Shuttle home. Somehow Bergues became the destination, and I led by using the rapidly disappearing sun as a navigation aid.
NB. Maps and GPS are far better. We eventually arrived in time for a coffee and decided we would come back...
The day ended with us back on the train, the fog coming back and an hour late due to hold-ups caused by a broken down Shuttle train earlier in the day.
By InvictaMoto - March 26, 2005 No comments: Links to this post