It was an early start on Saturday for the ride to Dover to meet the rest of the group. Ken Fulton, who I have known for thirty years or so stayed over Friday night.

The group numbered ten people; Alan and Sue, Frank, Cal, Ian, Ken, David, Elaine, Neil and me. The problem of keeping together never arose as everyone did a good job keeping an eye on the other bikes in front and behind, although we did occasionally get stretched out along the road.

Once we had negotiated the ferry port and I then set the first part if the A26 cruising speed to approx 70mph, and then got through the tolls I upped to about 125kph or about 77mph. Keeping us below the dry speed limit of 130km or 81 mph.  In the wet the limit drops to 110km or around 68mph.

In hindsight I should have plotted a route around Arras as we ended up going through the centre and the resultant traffic cost us valuable time.

The cemetery is around 300 yards from No1. Both very large with a fine crop of British and the Empire's young men.

The problem was always going to be rain. Many of us had opted for summer riding gear and so it was some few miles down the road it started to rain. We pulled over and put rain gear on.

As with summer showers it wasn't that long until we arrived at the next stop at Thiepval. Stripped off the waterproofs to go into the visitor centre.  The centre takes you through the history of the Somme battle and the rivals on the field.

Of course it started to rain as we headed out to the memorial arch itself.

I'd already had to drop out a few waypoints as we were way behind my intended schedule.

After Thiepval we arrived at the Tommy Cafe for lunch. There were already British bikes outside, as there had been at Thiepval. Sadly lunch was restricted to sandwiches and drinks. A half baguette filled any empty spots anyone had.

After Tommy Cafe the schedule was Lochnagar Crater but as some were low on fuel I decided to pass it and head into Albert for petrol. We had a long procession at Super-U as the pay booth was shut and only two of the pumps operate pay-at-the-pump.

From there it was back to Lochnagar to view the 90m diameter and 30 metre deep hole created by a mine planted under the German line.

From Lochnagar it was the short run down past Super-U into the City centre. It looked like the large round "cannon balls" were spaced to create motorcycle parking.

The plan was to go and look about the museum that starts under the Basilica.  However by the time we had had a drink as by now it was showing 35C on the pharmacy outdoor thermometer, it was closing!

We togged up and made the last leg of Day 1 to Amiens and to the Hotel Central & Anzac. The hotel is near the station and is on a narrow one way street with little street parking. I ran into the hotel to check on the parking that is actually owned by the hotel next door. Then I ran next door and for the €5 each we were booked in and had the bikes safely parked.

After booking into the hotel, and a shower we were assembling in the lobby and went around to an Irish pub. The plan to drink one and then look for a restaurant. In the end we were there until about midnight. Or at least a few of us were....

The weather turned again and the rain lashed down we stayed put!

Here are the first three beers out little group had! 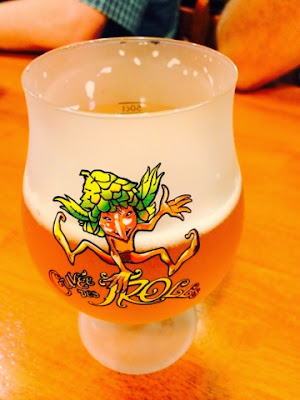 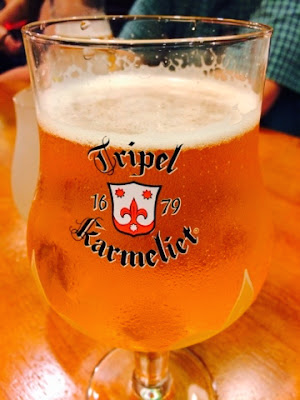 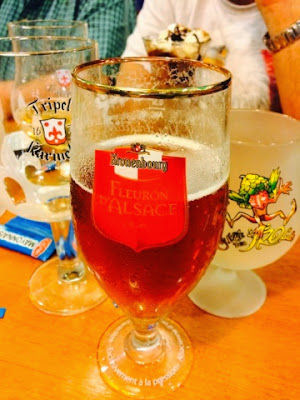 I forgot to get a pic of the fourth one, the ordinary pression with a dash of grenadine!  Actually very nice.

Then, time for bed.