Today was the day. In the inaugural year we had four tens entering.

The ICT Crowd were winners. I was the keeper and played all fours games and was beaten only twice.

Each team had five players on the field and it had to be mixed gender!

The nature of our business means we are male heavy.. One side was all women. The tackling was pretty tough.

In the end we managed to end up unbeaten, drew 2, won 2, and also had the only three yellow cards in the tournament, two that became red.....

The £37 raised in the charity bucket was given to my Movember charity.

Thanks to everyone that took part. 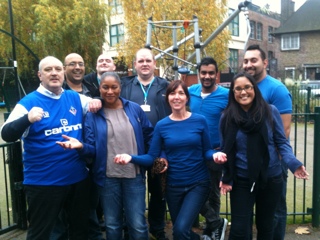 Cool. Sounds like you guys had a lot of fun for a good cause.