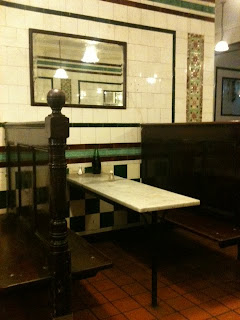 Although I like a decently appointed restaurant I do love the simplicity and minimalism of the London Pie & Mash shop.

Years ago my Grandparents had friends and neighbours in what was the "eel pie" business. These people ran a couple of chains of shops under the Harrington name. Mostly in south London.

Although I looked for one that I found on the web in Battersea, although it had, by the look of the parade of shops, long gone.

I believe there was another still existing in Tooting?

I love it. I used to call in more often when my job took me out and about more from the office than it does now.

With so many greasy spoon cafés in the neighbourhood and all the chains of burger joints, traditional London food is being pressed into obscurity.

Maybe if the BBC had put an eel-pie shop in the ever depressing "Eastenders", things may have been different. But why would they? "Eastenders" is a mockery of real life and is written by middle class pillocks.

People will pay an arm and a leg buying some pickled or raw fish that purports to be Japanese "sushi", but the humble eel is ignored.

All food at Manze's is cooked on the premises. Simply a small or large beef mince pie, mash and the liqueur made of parsley.

Why not try it next time you are in London?