The android tablet world seems to spawn a new model every few weeks across a wide price range. So when the UK's biggest supermarket chain announced a budget priced android powered tablet for £119, it was soon sold out.

We have a notebook computer that we have taken on holidays with us, mostly to keep in touch with email, surf the web on wifi, and to copy/backup photos from the digital cameras.

The Acer Aspire One is only small but compared to a tablet quite bulky, needs a power lead with a chunky great AC adapter but has an SD slot and can be connected with a USB cable direct to the camera.

So why a tablet?

A 7" tablet is has a much smaller footprint than the One, can fit in a pocket and can do most things the One can do.  I did quite a bit of research and settled on the Hudl. 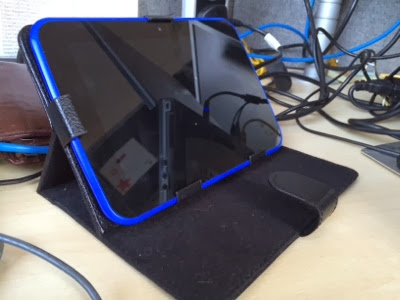 The Hudl comes in at a very budget price, has a micro-B USB port as well as a micro-HDMI port.  It has 16gb of onboard memory and what many others don't, iPads including, a micro-SD slot that can take up to 32gb memory expansion. In fact anecdotal evidence says that a 64gb card works as well.

The screen quality is pretty good. I have downloaded a few TV programmes from 4OD and BBC iPlayer and the picture and sound is clear.  I have the Google Cloud Player app and the sound through headphones is good enough for me. I don't know if I could hear every scratch on the cat gut by the orchestras third violin, but for reggae and rock it is clear.  The only annoyance is that half way up the scale the screen displays a message about taking the volume into dangerous levels. I am by no means hard of hearing but this is way way too early!! It connects easily to wifi networks at home and in public places like coffee shops and P&O ferries...

I checked on the website and there it was in full glorious colour that the Hudl will connect to a camera..... Mmmmm.  No need to get a micro-SD and adapter in the cameras to view photos from the Canon or the battered old Nikon D50.

I emailed Tesco Support and was assured that all I needed was an OTG cable and an app on the Hudl called ES File Explorer and all would be fine.  We've all viewed pictures on the screen on the camera and whilst they look good that small, once on a PC they could be out of focus.... or simply crap!

So I bought the Hudl. A blue one. At that price they were selling almost as quick before Christmas as mince pies and turkeys!  Blue was in stock.

After a few teething problems getting it to connect to the home WiFi were resolved with a call to the support number, all was plain sailing.

I bought an HDMI cable to connect to the TV, then an OTG (micro-b to mini-b) for the cameras. Installed the ES File Explorer app....

And that was before Christmas.  So far, neither camera has been detected by the Hudl on ES File Explorer. I can see the internal memory, I can see the external 4GB micro-SD card that is in the slot; it was left over from an old BlackBerry. But it never detects the cameras. So I logged a call.

Referring to the call that said I simply needed the OTG and app.  That was 19th December. It all went quiet.  I replied to the last email they sent. They logged a new call. Despite once again referring to the previous, now two, calls they said that it didn't work as Canon hadn't provided a driver.

I replied and that trail went cold.  I replied again, referring to the previous three calls and received an automated message that from 28th February, I would receive a reply in 24 hours.  Needless to say I have heard sweet fanny adams from Tesco Support.


Maybe the OTG cable is useless? In the end I have spent more money on another OTG cable. On the unofficial Hudl Users Group on Facebook, a guy said that his Fuji camera connects with just the OTG cable and the built in android gallery app.

When that comes I hope that the cameras will work!!

The cable arrived and the Nikon shows PC on the top plate LCD, but the Hudl still can't see it.

Hudl 2 no longer supports USB otg after update to android 5.1