When we got up for breakfast the weather looked bright and the sky was blue. By the time breakfast was finished it looked dodgy but dry and we knew rain was going to feature somehow.

It did. The Perth petrol stop showed Döra was keeping above 50mpg despite the higher speeds although these were tempered with some country lanes across the country. The figure was 53.78 mpg.

As we slogged up the A9 towards Aviemore it looked darker and then sunny but in the roadworks before Dalwhinnie we were in waterproofs and that was pretty much it for the day.

We arrived at Loch an Eilean slightly differently by TomTom to the mapped idea!

We told the steward what we had come to do and he was most helpful.

But first a chance to spot one of the rare red squirrels. Until relatively recently our only squirrel until some fool brought grey squirrels from Canada and let them loose. Now the red is found in a few pockets in England and of course in Scotland.

And after a short ceremony, Mum is in her final resting place where her spirit can see the castle and join the Shaw clan ancestors.


Once we were done we set of on another TomTom route on another slightly different route westwards to Kingussie and the marvellous A86 all the way to Spean Bridge where it meets the A82 to Fort William.

After a coffee stop at the Wild Flower in Newtonmore we set off. The A86 is about 35 miles of the most perfectly surfaced road imaginable. Smooth and on the corners they have thoughtfully laid a non slip surface. The road passes several lochs; Laggan and Moy.

In fact it was an anticlimax to arrive at Spean Bridge with traffic jams! We turned right to go up the A82 to see the Commando Monument.

I went there as a bit of a tribute to Claire's Dad, Victor Stevenson, who will be 90 this year and one of those trained here and who went on to serve in the Commandos on Burma. 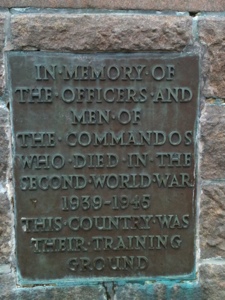 From there it was all southwards in some pretty miserable weather to the hotel at Balmaha on Loch Lomond.
By InvictaMoto - August 12, 2013

Sad to put your mom in her final resting place, but good that she can join the clan ancestors.